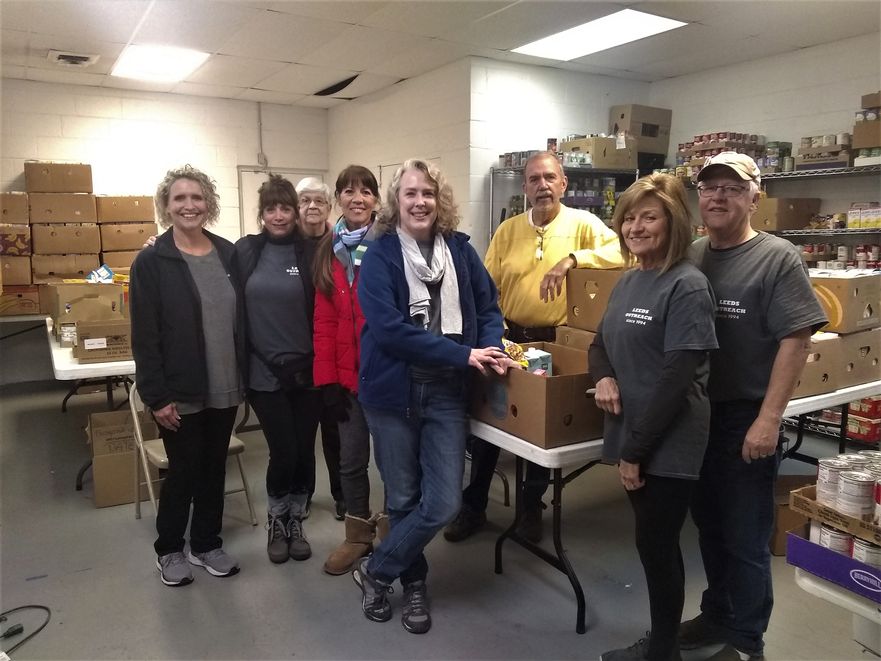 Helping a neighbor: Leeds Outreach nonprofit serves those in need

LEEDS – Several cars had already arrived just before 9 a.m. on the road leading past the civic center on Parkway Drive, where volunteers at Leeds Outreach were preparing for their Wednesday, January 5, 2022, drive-thru food distribution. 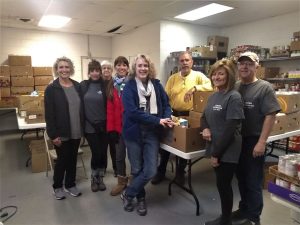 A wheeled conveyor snaked across the garage-like entrance to Leeds Outreach, located at the back of the civic center, where around 60 boxes of food were set on tables inside. This drive-thru-styled distribution, you can imagine, was the result of the COVID-19 pandemic, which forced the center to shut down in March 2020 and adopt another way to get meals out to those that need them.

She said that the center’s current director, Beverly Riddlesperger, has been there for 14 years. It operates as a 501(c) nonprofit with a staff of volunteers.

“We used to be an open pantry where [clients] can walk in and we could talk with them, and they could take what they needed a certain number of times a year,” Riddlerperger said. “Right now, we’re just doing this Wednesday food distribution, and we’ve seeing between 60 and 50 families, for the most part, every week, every Wednesday since we shut down.”

Riddlesperger first became involved with the program when her youngest daughter began preschool and had known the assistant director at the time, who asked her if she was interested in working at the Outreach’s office.

“I believe in the organization,” she said. “I think that we’re good stewards of the resources that we’re given, and I just felt like it was a much need program for this city.”

“I have great parents; my brother was always sort of my moral compass. And I didn’t know that this would become a passion. I just knew that I could help when my daughter was little. And I try not to say that I love what I do because the goal is for there to not be a need for what I do, but it has become a true calling.” 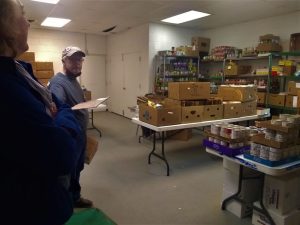 Riddlesperger noted that as they serve the needs of citizens who qualify for the assistance, they get to know some of them.

“You learn a lot,” she said. “You learn a lot of how people can end up where they might actually need our services and opened my eyes in ways had I not touched their lives or been involved in their lives, I would have never been able to understand.”

“I tell everybody that those people are the first people that step up and want to give and help other people. So I think knowing what it means to be hungry or not be able to pay their power bills – they’re the first to want to help a neighbor.”

Leeds Outreach is funded by donations from churches both outside and inside of Leeds and from individuals as well as sponsors from businesses, including Publix, Walmart, Oak Mountain Missions, and many others.

Those who are eligible for assistance are those whose income is no greater than 150 percent of the poverty level. Leeds Outreach’s threshold for assistance was $19,140 in 2019. If someone in need of food lives in the city limits and can provide proof of income and residence, they can receive help.

But a certain special day of the year is particularly close to Riddlesperger. In Christmas 2021, Leeds Outreach provided toys and other services for an estimated 200 kids, she said.

“Christmas has always been my passion,” she commented, saying that sponsors were found for 173 of the children, meaning that the Outreach contacted organizations to buy Christmas toys, school supplies, and other needs such as clothing and bedding.

“It’s special and the fact that the community and individuals support us – it’s a big undertaking as you’ll see what our expenses were last year,” she said. “We haven’t closed out financials for the year, but our portion of Christmas is usually close to $10,000 – between $8,000 and $10,000. It would be undoable if the community didn’t step up and take on shopping for the kids.” 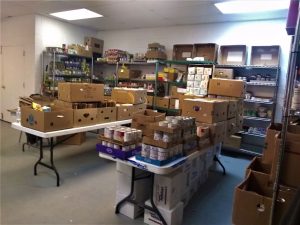 The pantry of Leeds Outreach. (Photo by Nathan Prewett)

When Leeds Outreach was first established, children would usually only receive toys, but since then, it has expanded greatly to provide not only for the kids and their families.

“We have amazing volunteers here,” she said of those who chose to help out, especially during that busy time of the year. “We’ve been truly blessed, but we couldn’t run without people treating it like their job. You know that they’re going to show up and do what’s asked of them.”

Volunteer staff member Lynda Dial took the opportunity to brag on Riddlesperger and said, “I know she wants no credit for this. I mean, God’s good and lets us do this, but she is outstanding.”

Leeds Outreach maintains a Facebook page and can be reached at 205-699-7291 for donations and volunteer opportunities. 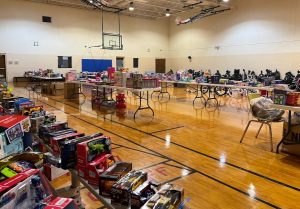 Items being distributed to those in need in Christmas 2021. (Photo courtesy of Larry King) 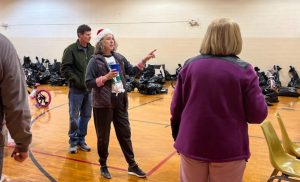 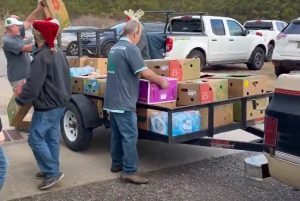