Park finally was finally able to get his hands on "Larry Longhorns" after a persistent pursuit. With a gross score of 171 4/8, Park's buck sported 12-inch G2 tines. (Photo courtesy of Chris Park)

Anyone who has been hunting deer in Alabama for a while has surely heard of Gee’s Bend, a large plot of land in a horseshoe bend of the Alabama River in Wilcox County. 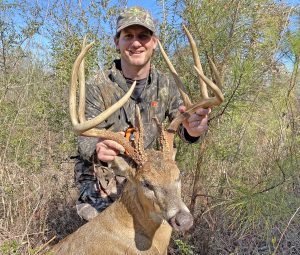 Park finally was finally able to get his hands on “Larry Longhorns” after a persistent pursuit. With a gross score of 171 4/8, Park’s buck sported 12-inch G2 tines. (Photo courtesy of Chris Park)

In the mid to late 20th century, the 6,600-acre property smack dab in the middle of Alabama’s legendary Black Belt was known as a place where whitetails grow to be big and fat with prodigious antlers. During its heyday, Gee’s Bend was the epitome of prime habitat with abundant row crops, including soybeans.

Fast-forward to the 21st century, and Gee’s Bend has changed significantly. Gone are the row crops. Instead, Alabama’s most abundant crop, pine trees, covers the landscape, changing the habitat for the wildlife.

Chris Park, a plastic surgeon from Mobile, joined Gee’s Bend Hunting Club in 2012, hearing all his life about the big deer from the area. However, the change in habitat had him somewhat disillusioned and wondering what he should do.

“I was not feeling all that optimistic about the bucks at our club anymore,” Park said. “This land used to be known for soybeans and large, heavy-bodied deer. The extra protein also helped grow really nice racks.”

“I try to limit myself to hunting the right area that will not taint the deer’s territory, not let my scent or trail go across the bedding area or fields. I try to sneak in early and out late to avoid alerting the deer to hunter presence. As we all know, repetitive spooking of deer will change their habits and territory and travel routes and hours of mobilization. Despite all of that, I had been in the camp since 2012, and I had only pulled the trigger on two deer that I was proud of but nothing that really got my pulse racing.”

That all changed when a pair of bucks crossed a large clearcut in what became Park’s favorite hunting area.

“I tend to try to hunt less popular places and explore the great unknown,” Park said. “An area in the south end of our property is very rarely hunted because there’s not large quantities of deer. There’s never been a quality deer taken from it, and it’s hard to get to, being an ATV-only ride or a good 15-minute ride from the camp on the blacktop with a long hike at the end.”

While his attempt to take one of those clearcut bucks ended in a rifle malfunction, it convinced Park to stick with the area and be discreet about what he had seen.

“I kept hunting down there the rest of the year,” he said. “When I first turned around in that tripod and saw those two deer going across the clearcut, that got my blood pumping, and I only saw them for about six seconds. I put cameras down there after that because I didn’t have any out in that area. I never saw that other deer when they separated from the bachelor group. He may be on the adjoining property, but I’ve never seen him again. I started hunting down there every time.”

He saw the biggest of the two bucks again chasing a doe across one of the clearcuts. A rushed shot failed to find the mark.

“Now, at this point, I became possessed,” Park said. “The planning and hunting devoured almost all of my free time slots. I plotted and schemed and thought constantly. I made up different ways to hunt the property, which again was difficult because it essentially was hunting this clearcut or the green field or the very narrow SMZ (streamside management zone). But the rut was still on, and I was hoping to get lucky. I put out game cameras which I had mostly abandoned because, in my mind, I like the unknown. I don’t like to know there’s a deer there at night that I can’t see during the day, and I don’t like to know if there’s not a big enough deer on camera in the area. But I quickly got multiple pictures of my beast day and night. I nicknamed him Larry Longhorns.” 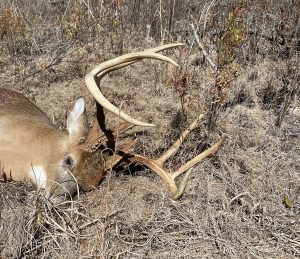 Chris Park had to make a 215-yard shot from a kneeling position to bag this big buck. (Photo courtesy of Chris Park)

On one weekend, Park headed to his area early on an overcast morning when it was pitch-black dark. After a long walk, he got about 100 yards from his stand before he stopped in his tracks.

“I could smell the tarsal glands of a massively in-rut buck,” he said. “The smell was 10 times stronger than the scent of the tarsal glands when you’re cleaning a heavily rutting deer. The wind was not strong, and I can guarantee you that I was within 20-30 yards at the most of a bedded-down buck. But it was dark, and I didn’t know what to do. I was standing in the middle of the road with clear-cut extending at least 70 yards to either side of me.”

After several minutes of indecision, Park continued to his stand instead of waiting for daylight.

“I will never know if that was the right decision,” he said. “I know I didn’t see a deer at daylight or that entire morning or even the rest of the day because I hunted until dark.

“The next week, I decided to do something different, and I went in after daylight. I just walked extremely slowly. I took a step about every minute. I took an hour to get to my stand. When I was about 3 yards from my stand, I took one more step, and I saw something move. I looked to my right. He had spotted me and was running away. I got down on one knee and got my gun up. A lot of times, they will stop for a second before they go into the woods. And that’s exactly what happened. The second he stopped, I shot.”

Park was afraid he missed the 215-yard shot because the deer ran down the trail he was on, curved, and ran uphill about 40 yards before he disappeared.

Instead of taking a chance of bumping the buck, Park enlisted the services of Art Powers.

“The wood line the deer had run into was off our property, and I had to get permission from the neighboring club to cross the line,” Park said. “I brought in Art Powers and his tracking dogs again for the careful search. I was not even going to look without the deer-tracking dogs. I had made too many mistakes.

“We clambered through the clearcut and went right to where he had stood. I found no blood. For a second, the dogs were not acting excited, and my heart sank. I said, ‘Art, he went left right down here and took a hard right,’ and we followed that path. As soon as we turned right, Art said, ‘Chris, I have blood, good blood.’ And I saw it too. It was every few inches and then on the trees where he had sideswiped the trees with hair, blood, and clot. After that, the fresh lung and heart blood was obvious, 30 yards later, about 60 yards total, there he lay. It was such a pleasure to put my hands on him. But I was also sad the chase was over.”

When he got back to the camp with the big deer, the other club members were in disbelief. 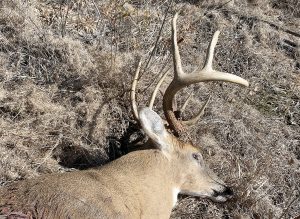 Chris Park had to make a 215-yard shot from a kneeling position to bag this big buck. (Photo courtesy of Chris Park)

“Nobody thought there were any deer like that on our property anymore,” he said.

“I was getting pretty frustrated,” he said. “Gee’s Bend is not cheap. But my family and I love it. We have fun. Those big deer are there; they’re just not stupid. Another thing is they’re not always in your prettiest fields where you see the most deer. This deer was in a clearcut with a field nearby.

“I hunted him probably 24 times, and 20 of those times, I didn’t see a single deer. It’s not that they’re in the pretty places.”

Park also found out quickly that if he hadn’t bagged that buck when he did, he may have never seen him again.

“The next day, they came in and planted the clearcut,” he said. “They would have run him out.”