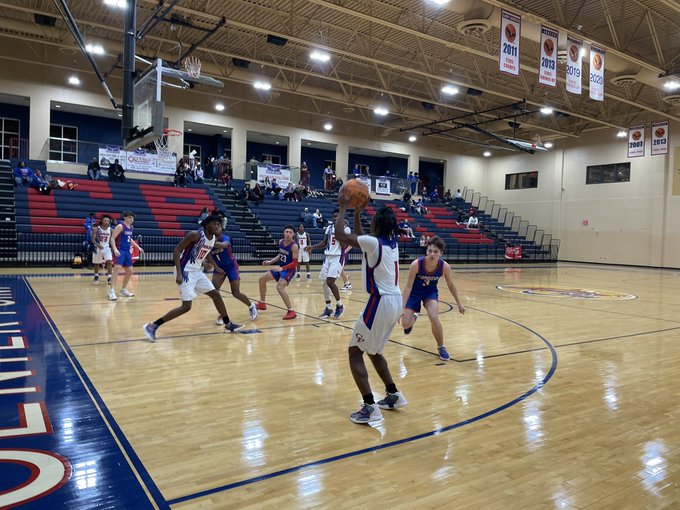 Center Point defeated Cordova to win the regular season 5A Area 12 title. The Eagles will host the area tournament. (Photo by Bobby Mathews)

CENTER POINT — It took the Eagles a little while to get going here Monday night, but they eventually pulled away from Cordova to seal the 5A Area 12 regular-season championship with a 49-33 victory. The win lifted Center Point to a 10-12 overall record and 5-1 in area play. 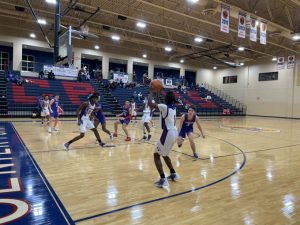 Center Point defeated Cordova to win the regular season 5A Area 12 title. The Eagles will host the area tournament. (Photo by Bobby Mathews)

Cordova came out swinging in the first quarter, controlling the tip and holding a 4-2 lead for much of the first four minutes of the game as multiple Center Point three-pointers were off the mark. The Blue Devils played a disciplined game on the defensive end and slowed the tempo down to combat Center Point’s superior speed and athleticism.

But senior guard Aaron Walker nailed a trey from the top of the key to pull within a point, and that began to open things up for the Eagles. Kentrell Bonner blocked a shot down low, and on the Eagles’ ensuing possession, junior small forward Mario Clark drilled a three, and then with the score tied at 10-10, Kenneth Richardson hit a three to make it 13-10 Center Point.

The Eagles never looked back, and now they will host the area tournament. But there’s still a lot of room for improvement, as Center Point’s early play was shaky.

“They recover well because they have a lot of athleticism,” Center Point head coach Rodney Chatman following his team’s victory. “Coaches have film, so they’re going to break us down. One of the things we did tonight, we probably surprised them with 1-2-1-1 (defense) that we threw. That’s not in any film. So we got up 23-12,.”

The Eagles clamped down defensively in the second quarter, allowing only two points by the Blue Devils for the entire period. On that play, Cordova’s Jaxon Hulsey faked a shot, then drove the baseline before hitting a floater to score his team’s only points.

Clark again stepped up with another three-ball, stripping the net on the Eagles’ final possession and making it 23-12 at the half.

In the third period, Cordova got back to its disciplined style of play on the defensive end, and that paid dividends for the Blue Devils’ offense as Cody Headrick hit three three-pointers in the second half to pull the visitors to 28-24. But Center Point switched its defense up, using a press to force Cordova into multiple turnovers. It didn’t take long for the Eagles to make it 35-25 at the end of the third.

“We finally got an understanding of the game plan,” Chatman said. “We’ve got a lot of immature kids, and they’ve got to get out of the crowd and understand to stick with the game plan. We have a game plan, and they get away from the game plan. Once we finally settled them down and used our timeouts properly and got them back onto the game plan, then we were able to pull away once again.”

With a chance to slam the door on the Blue Devils, Xavier Jackson took advantage, driving the lane and causing havoc against the Cordova defense. With around two minutes left, he drove, scored and got the foul call. Jackson stepped to the line and hit the free throw, making it 47-32 with 1:59 left. From there, the Eagles cruised on to victory.

Walker led all scorers with 13 points, while Clark added 10 for the Eagles, and  Jackson scored 8.

Center Point’s girls cruised to a 67-38 victory over Cordova.