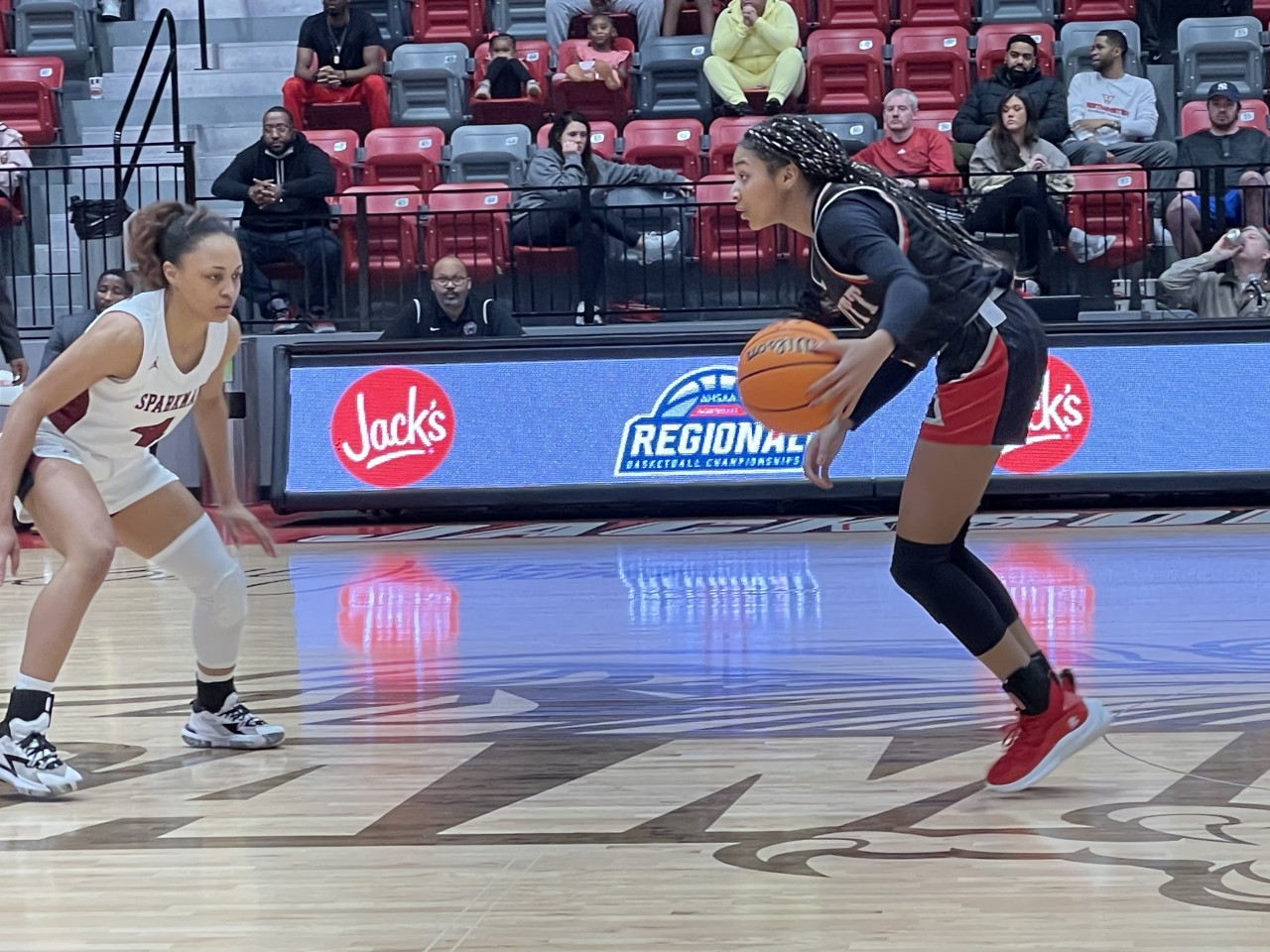 JACKSONVILLE — Four Hewitt-Trussville players scored in double digits, streaking to a 61-45 victory against Sparkman in the AHSAA Northeast Sub-Regionals here on Wednesday afternoon. 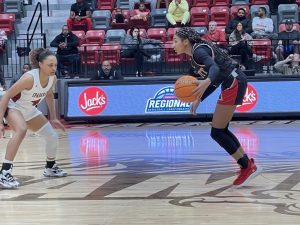 Hewitt-Trussville’s Jordan Hunter looks to drive vs. Sparkman during the Huskies’ Sub-Regional victory over the Senators on February 16, 2022. (Photo by Bobby Mathews)

The Huskies pulled away by halftime, using a lockdown defense to smother their opponents, only allowing 12 points in the half and four in the second quarter.

Audre Benson led all scorers with 16 points, while Jordan Hunter added 14, D’Yona Jones had 13 and April Hooks poured in 10. Jones was one rebound shy of a double-double and blocked five shots. The Huskies went into the locker room at halftime, up 31-12.

Sparkman came out pressing in the second half, hoping to cause turnovers that would lead to easy baskets in transition. For the most part, however, Hewitt-Trussville handled it well.

“I think early on we might have had a few issues with our press breaker, but I think some of that was us, our guards, coming in late from flag football,” Hewitt-Trussville head coach Tonya Hunter said. “I think lately, over the last two months, we’ve been doing a good job of breaking the press. I think they did a really good job (today). We prepped for it, we made some key areas we need to go to, and they did a good job at it.”

Sparkman made a run in the second half, trying to close the gap behind Kennedy Langham, who scored 12 for the Senators. Abethany James also scored 12 for Sparkman. No other Senator was in double digits.

Benson came up huge in the first half for Hewitt-Trussville, scoring 13 of her 16 points by the time the two teams went into the locker room.

“Mainly it was the cutting,” Benson said after the win. “Like, with them standing in front of me and knowing that I could go past and hit a layup. Creating plays.”

The lockdown defense showed off what a fully prepared Huskies squad can do, especially through the first three quarters..

“Going into the game, one of our keys to win was definitely defense,” Hooks said. “I think for the first three quarters … one of the big things we did was cut down on second-chance points for them … I feel like we knew our role on defense.”

For Jones, her six defensive boards turned into a productive offensive effort at the other end of the floor.

“When I see that ball going up, I know it’s going in or it’s going out,” Jones said. “That’s the two things it’s going to do. So (on offense) I’m just looking up and getting ready to get the ball, rebound it and put it back up or hit one of my guards for the three.”

This is the first complete season for Jones, a senior. As a sophomore, she was hampered with a bone bruise, and in 2021 lost 10 games due to Covid-19.

The Huskies will see a familiar foe on Monday, February 21 at 9 a.m., as Hewitt-Trussville’s win sets up a rematch with Vestavia. This will be the fourth time this season that these two teams will play one another, with Vestavia owning a 2-1 advantage.