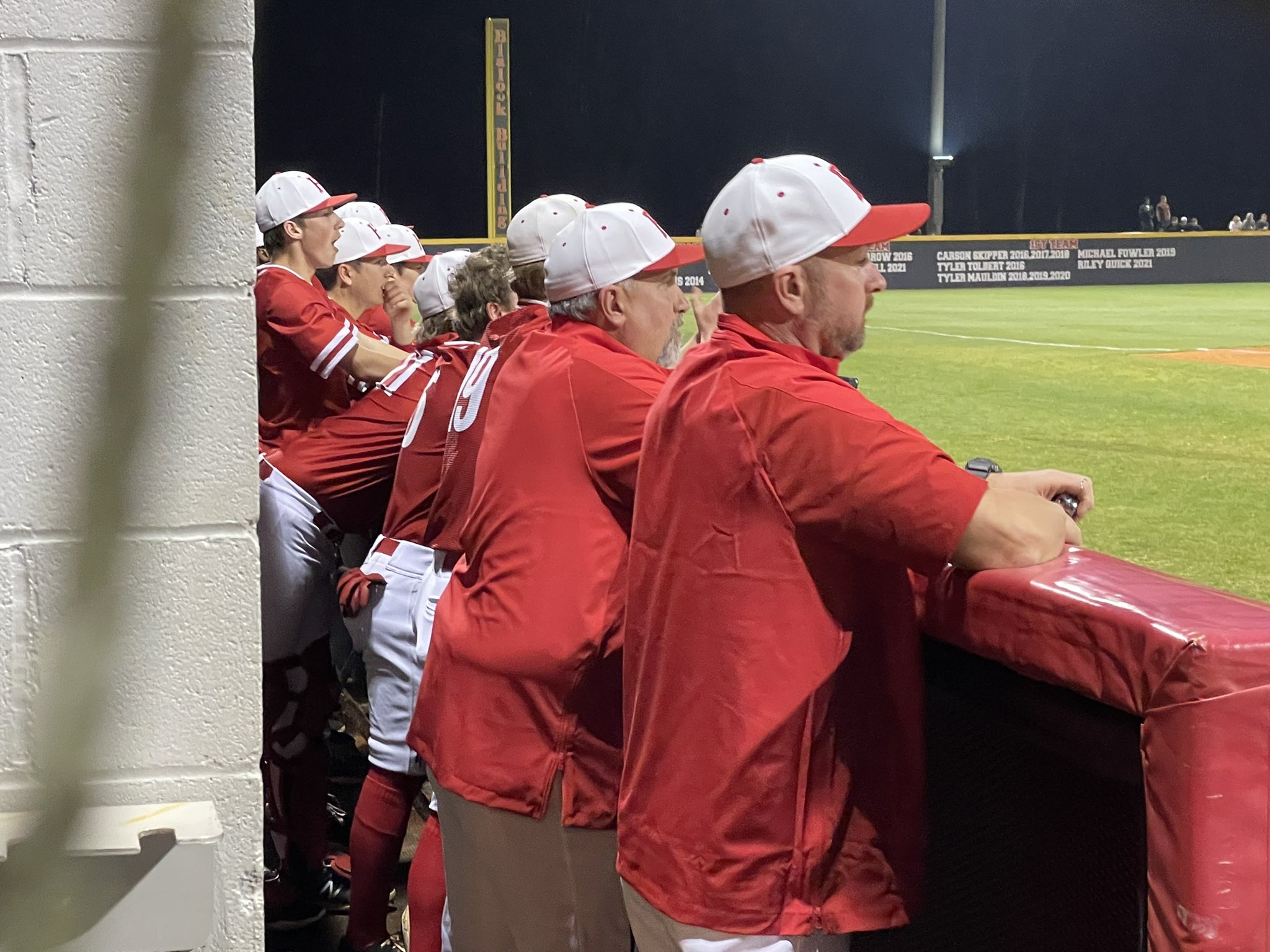 Hewitt-Trussville coaches and players watch from the dugout as the Huskies come back in the sixth inning to beat Pelham, 6-3, on Thursday, February 24, 2022. (Photo by Bobby Mathews)

TRUSSVILLE — For five innings, Pelham had Hewitt-Trussville on the ropes. but in the bottom of the sixth, with five outs left in the game, the Huskies took advantage of three errors to score four runs and win, 6-3. 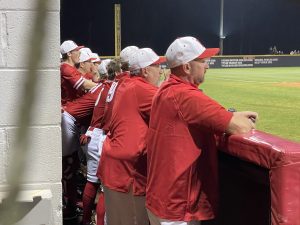 Hewitt-Trussville coaches and players watch from the dugout as the Huskies come back in the sixth inning to beat Pelham, 6-3, on Thursday, February 24, 2022. (Photo by Bobby Mathews)

The Huskies’ Riley Quick pitched all seven innings, picking up the win, throwing 88 total pitches, with 60 of those for strikes. He struck out 10 and only allowed two hits.

Unlike earlier in the week when the Hewitt bats exploded for 8 runs in one inning, this time the Huskies had to rely on a little luck and then manufacture runs.

Baker Green walked in the bottom of the fourth and then scored on a passed ball.

The Huskies took the lead on a series of unforced errors in the bottom of the sixth after Baker Green singled on a line drive to right and Kurt Kizer singled to left. Quick was then hit by a pitch to load the bases. Jack Ollis then walked to score a run. A wild pitch led to two more Huskies crossing the plate — Tyler Blake (courtesy running for Green) and Jackson Kendrick (courtesy running for Quick) — and Ollis advanced to third.

“I thought they outplayed us for five-and-a-half innings,” Hewitt-Trussville coach Jeff Mauldin said. “Going into that inning, they had one hit and scored three runs, an error and a couple of walks. I made a bad pitch call on the one hit. We’re not playing great, we’re not playing with a lot of energy. We were supposed to play these guys yesterday. No excuses, but your clock gets changed — you’re supposed to play, you don’t play, we’re messing with the tarp for two days, off and on, working on the field for hours before we play — that shouldn’t be an excuse, but we’re human and it happens.

“I was proud of Riley. He walked two guys, I make a bad pitch call. He gives up the single. Then he throws the ball away on a bunt. But you never saw him flinch. He just kept pitching, giving us quality pitches and giving us a chance to be in the game.”

But the Huskies weren’t done. A passed ball meant that Kizer scored, and then a throwing error led to Ollis scoring. By the time the sixth inning was over, Hewitt-Trussville had scored six and Pelham had allowed four runs on two hits and three errors.

Quick allowed one hit in the top of the seventh before the Huskies closed the game out.