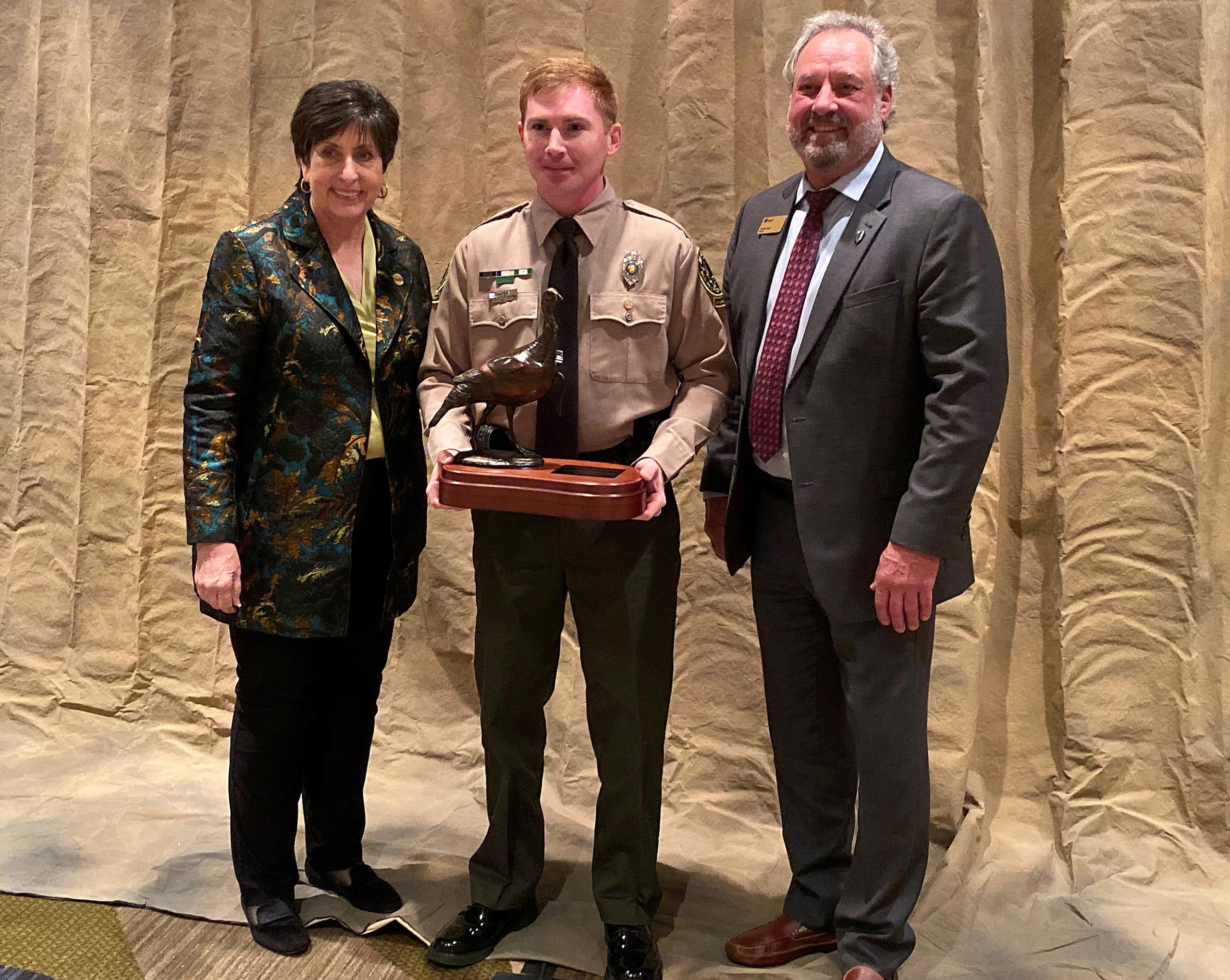 Alabama’s chapters racked up numerous awards at the recent National Wild Turkey Federation (NWTF) Convention in Nashville, and one of the state’s game wardens was selected for a prestigious honor. 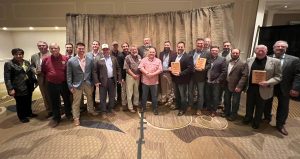 Conservation Enforcement Officer Drake Hayes of the Alabama Department of Conservation and Natural Resources’ (ADCNR) Wildlife and Freshwater Fisheries (WFF) Division was named the NWTF’s Wildlife Officer of the Year at the awards banquet.

The NWTF states the Wildlife Officer of the Year Award is given to individuals who have excelled and demonstrated exceptional performance in the following areas: teamwork and innovation, attitude and leadership, and achievements and accomplishments.

One of those accomplishments involved Hayes’ work during Alabama’s 2021 turkey season, especially on opening day. Hayes had not only scouted areas prior to the season to search for possible illegal baiting; he was also training one of the Law Enforcement Section’s new officers.

“I had located bait on multiple properties in Shelby County on opening weekend of turkey season,” Hayes said. “I was in the middle of our field training officer program. I was training Officer (Trent) Robison, our officer for Bibb County at the time.”

Hayes and Robison went to the first property well before daylight to be in position to listen for hunters who might be illegally hunting over bait.

“Where I found the bait, we had to cross a log over a very large creek that was over our heads,” Hayes said. “You could cross the log and stay dry. But we had a significant amount of rain between the time I had located the bait and opening day. We heard the turkey hunters calling. We saw lights and activity and knew they were there at the bait. We get to the log, and it’s completely submerged. You couldn’t see the log; I just knew where it was. We had already put in so much work that we just had to go for it.

“The water is moving. It’s looking like whitewater rapids. I used a 6-foot stick to find the log, and we just had to feel with our feet where the log was. At this point, the water is up to our knees and cold. Opening day last year was pretty chilly, especially when you’re walking through a creek.”

Hayes and Robison managed to cross the log with wet pants and boots full of water to locate the hunters.

“We issued multiple citations, including hunting over bait,” Hayes said. “Then we have to traverse the exact same log coming back. It was that or swim. We got to the next property and cited three individuals for hunting over bait. The next day, we worked a hunting over bait case in Bibb County.

“It was a very successful opening weekend. During the course of the season, we issued citations in nine hunting over bait cases, using an electronic call, several harvest record violations, and other violations, like loaded guns in vehicles and multiple license violations. I think it was 25 turkey-related violations for the season. It was a very productive season for me, and I was able to have our new officer with me for the majority of those cases. He got to experience a unique and productive season.” 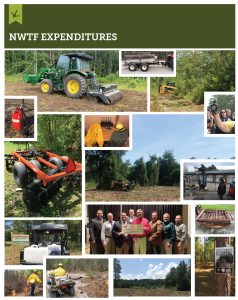 Expenditures derived from funds donated by the NWTF are used in projects all over the state. (Photo courtesy of Adrienne Wilkins)

Hayes had already been selected as the Alabama NWTF Chapter Wildlife Officer of the Year when he went to Nashville and was surprised when his name was announced as the national winner.

At the ceremony, Hayes said, “I would just like to thank God first and foremost. And thank Him again for all the blessings in my life, and thanks to the NWTF for this wonderful opportunity and for my family for putting up with my career choice – all the early mornings and late nights and everything in between. I would also like to ask for a round of applause for all the other officers and their families that are here as well tonight. Each and every one of them is just as deserving if not more than me.”

That night is something Hayes said he will never forget and is honored just to be selected for the nomination and to be able to attend the NWTF Convention.

“It took my breath away when they called my name,” he said. “It was very unexpected and such an honor to receive that award. Like I said, every officer was deserving of the award. I was blessed I was chosen.”

“We’re happy to have a longstanding partnership with NWTF,” Weathers said. “It’s beneficial to us in that it gives us a platform to recognize our officers who routinely go above and beyond in the detection and prosecution of egregious turkey hunting violations in the state of Alabama. The ability to recognize those officers has a positive morale effect for the entire staff, which further encourages our officers to get out and protect an already fragile species that is so much a part of Alabama’s hunting heritage.”

The 2021 turkey season was also special to Hayes for a reason not related to his work in uniform. He swapped into camouflage to take his dad, Johnnie Hayes, turkey hunting.

“We had tried several years to connect with turkey for him,” Hayes said. “We got close on several occasions but were never able to get him his first turkey. We finally got on a gobbling bird, and the stars aligned. There were no hens that I had to compete with. He was gobbling good on the roost. We were able to set up. I did a fly-down call, and we actually watched the bird fly off the roost and come straight to us.

As for the other awards Alabama NWTF chapters received at the recent convention, State NWTF President Craig Harris said the Alabama State Chapter received the L.A. Dixon Award for Outstanding Chapter with 7,500-9,999 members.

“We didn’t get an award for it, but the Alabama State Chapter was financially, by far, the most successful last year,” Harris said. “We raised way more than anybody else. Through our banquets and fund-raising, the Alabama State Chapter was the top state in the nation for net dollars with more than $1 million raised. We were very proud of that. These funds are used at the local, state, and national level for research and habitat projects and the preservation of Alabama’s hunting heritage.

“We have a lot of projects, research, and habitat improvements going right now in Alabama.”

Harris also praised NWTF’s partnership with WFF on most of those projects.

“We’ve been good partners for many years,” Harris said. “Most everything we give Wildlife and Freshwater Fisheries, they’re able to get Pittman-Robertson Act funds, so it works out great.” 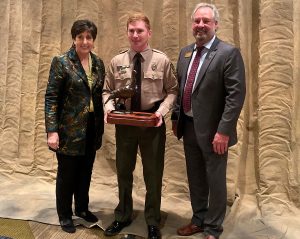 Chuck Sykes, an avid turkey hunter, said when he became WFF Director in 2012, he saw an opportunity to tap into the federal funding derived from an excise tax on firearms and ammunition that can be used for projects that involve wildlife management, wildlife research, and hunter education.

“One of the first things I noticed after I got here was the (NWTF) state chapter had a program where biologists could apply for assistance for buying equipment and things such as that,” Sykes said. “I met with Phil Savage, who was then state president, and said we needed to be smarter with the money. I said set aside the money you want to spend. We’ll go through the process and select the projects y’all want to fund. Then write Wildlife and Freshwater Fisheries a check. Then we can use it as state match, and we can quadruple the money, and we can do more things for turkeys and turkey habitat.

“That went really well, and I have had great relationships with all the presidents from Phil to Craig Scruggs and Craig Harris now. NWTF puts their money where their mouth is. Not only are they talking about helping turkeys and turkey habitat, they’re putting their money behind it. The NWTF is one of the best NGO (non-governmental organizations) partners the State of Alabama has. We’re extremely grateful for their participation and support.”