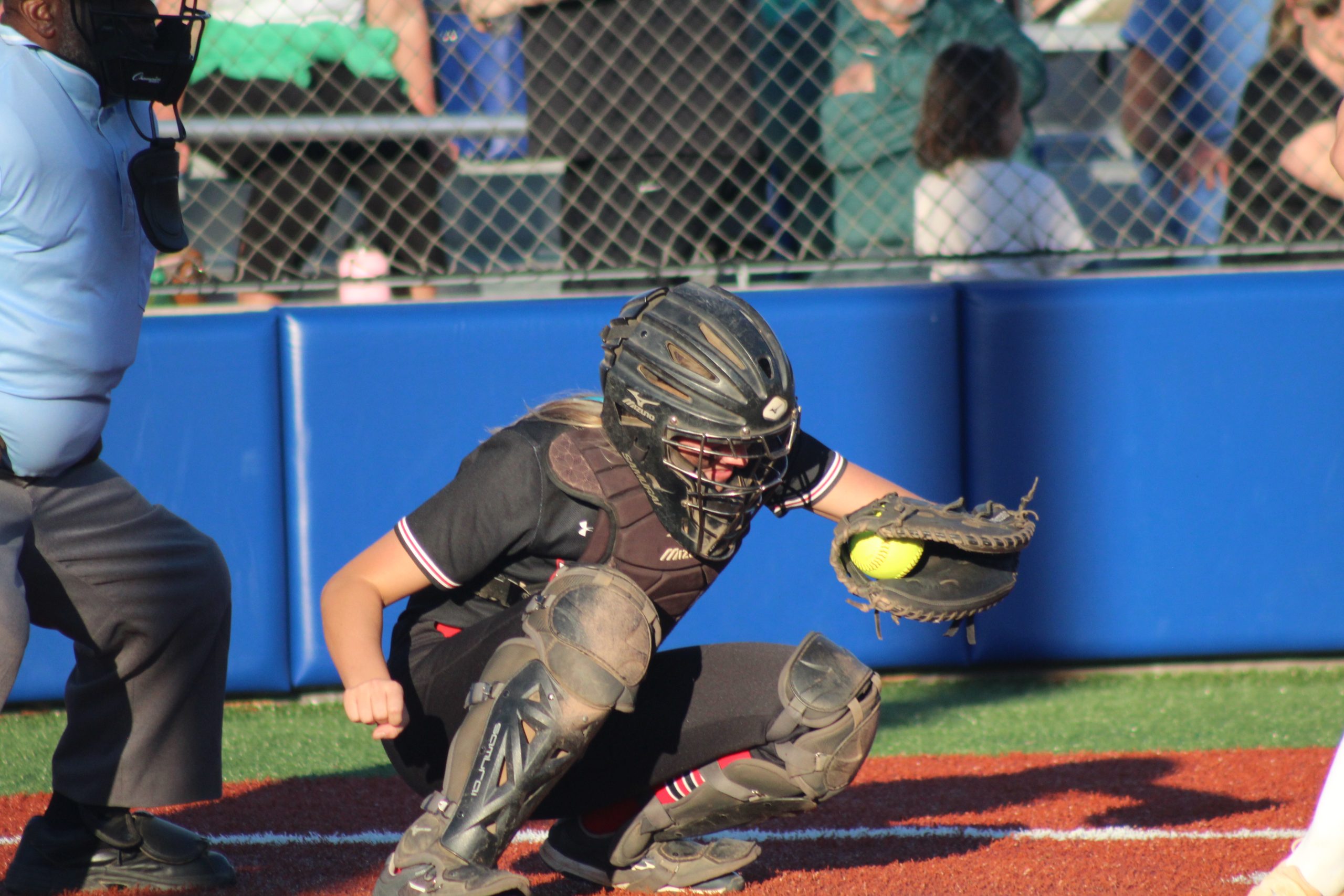 VESTAVIA HILLS — The Huskies didn’t play their best ball on Thursday, March 17, surviving a mid-game blast from Vestavia’s Kayla Franklin in the bottom of the fifth before settling in and taking the 4-2 victory. 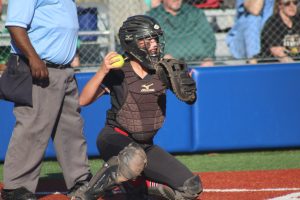 Senior catcher Riley Tyree had a huge game behind the plate for Hewitt-Trussville during the Huskies’ 4-2 victory over Vestavia Hills on Thursday, March 17, 2022. (Photo by Bobby Mathews)

The Huskies were led by Riley Tyree, who got the scoring started with an RBI single to left field, scoring Sara Phillips and pushing Riley Rudick over to third base. But with two runners in scoring position and two outs, the Huskies couldn’t push the lead any further in the opening frame.

“It’s been a week since we’ve seen live pitching from anyone besides our own players, and it showed,” Huskies coach Taylor Burt said after the game. “We came out a little rusty. We did a good job putting a two-out RBI on the board right off the bat, and didn’t put any more up hardly.”

The Huskies went down one-two-three in the bottom of the second, but then had another chance to put runs on the board in the third, when Kenleigh Cahalan doubled and Hannah Dorsett walked. With two on, Phillips’ sacrifice fly to right field allowed Cahalan to advance to third.

From there, Rudick put a ground ball in play that Vestavia mishandled. Cahalan scored, Dorsett advanced to third, and Rudick reached on an error. At this point, the Huskies led 3-0, and it looked like they would cruise to a win. Except that’s not what happened.

Vestavia came back to score in the bottom of the third inning after Ella Gallaspy tripled off of Zaylen Tucker, who scored one batter later on Libby Pippin’s sacrifice fly to center field.

Burt brought in Kate Hicks in relief, who got the Huskies into the dugout with no further damage that inning, striking out Caroline Redden to end the Vestavia threat.

Phillips then singled past Franklin, the Rebels’ star shortstop, to drive home Ruby Simon, who had walked and then stolen second earlier in the inning. With Simon crossing the plate, the Huskies increased their lead to 4-1.

Franklin cut that in half with a solo bomb in the fifth inning. Burt left Hicks in after the home run, however, to work her way out of the inning. Hicks hit Pippin with a pitch, and then allowed a single before catching Reddit’s line-drive comebacker.

“You’ve got to learn,” Burt said. “(Hicks) is a sophomore, Zaylen’s a freshman, and they’re coming in and seeing significant Area experience for the very first time. The only way to learn is to do it, and we want to learn now so that come end of April we’re ready to go.”

The Huskies’ Tyree had a huge game behind the plate, taking advantage of Vestavia baserunners. First, she picked off Mary Katherine Meeks at first base in the bottom of the second. Meeks had reached on an error, and had a momentary lapse as she lost sight of the ball behind home plate. Tyree took full advantage. The Huskies’ senior catcher/utility infielder also threw a runner out later in the game.

“I knew that this team is fast,” Tyree said. “Six out of their nine hitters are slappers, so you know they’re going to have speed, so I was ready for them to go. And then I heard the dugout say ‘Going!’ So I knew I had to get up and make the throw.”

Tyree is one of a handful of seniors on this team whose leadership is invaluable as the season progresses, Burt said.

“She’s a game-changer,” Burt said. “Overall, we need about three of her. Any position we put her at — catcher, third, first — she’s going to make a difference. She definitely made a difference today with the way she impacted those first couple of innings.”

Sarah Hindman came in to relieve Hicks after the fifth, mowing down the Rebels in order in the sixth and seventh innings to preserve the 4-2 victory.

Tucker picked up the win for the Huskies, allowing one run on two hits over two-and-two-thirds innings.