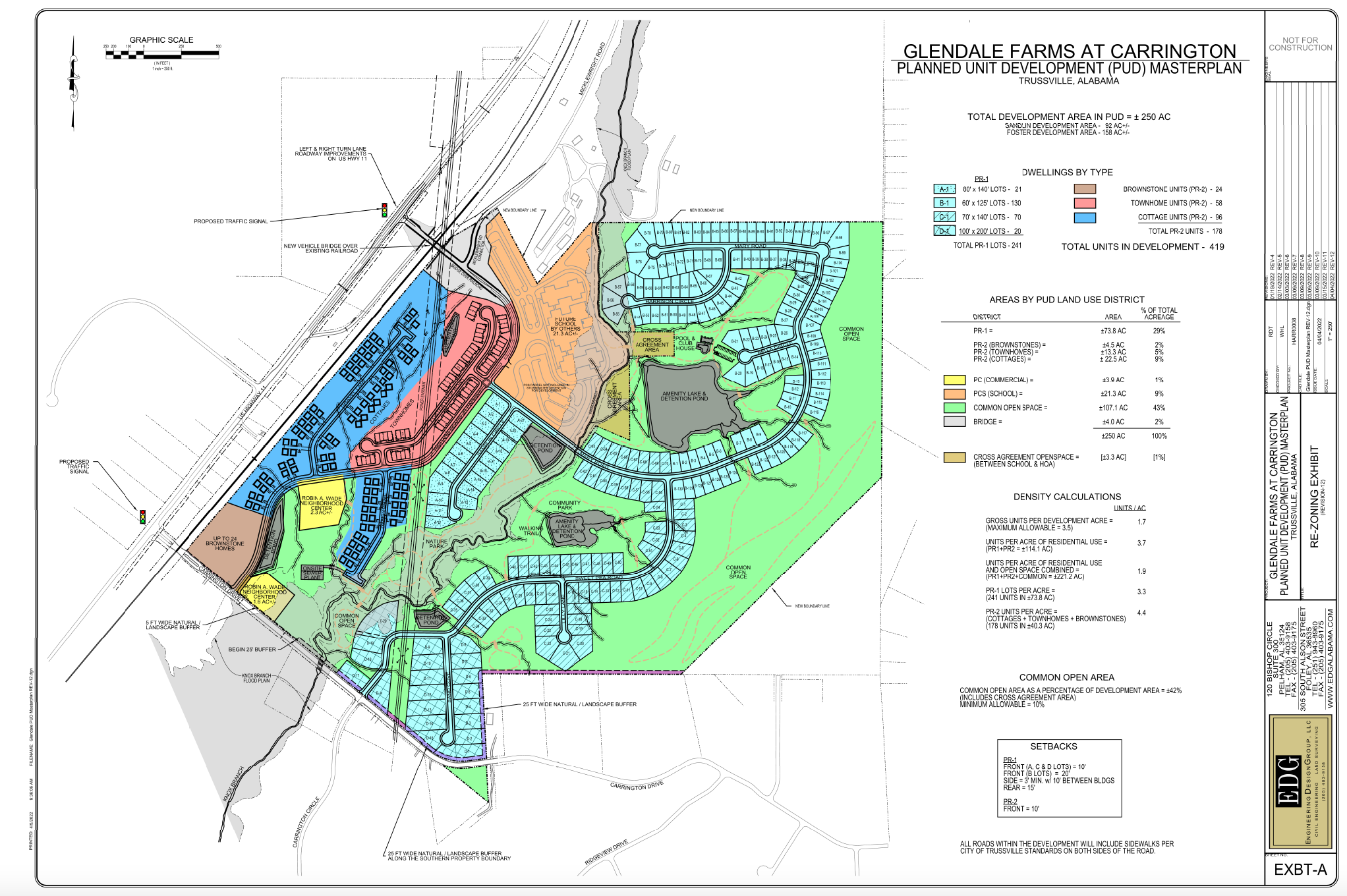 TRUSSVILLE — The Trussville City Schools (TCS) Board of Education (BOE) discussed a potential fourth elementary school in the proposed Glendale Farms at Carrington neighborhood at the board meeting on Thursday April 28. 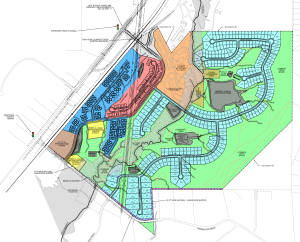 TCS Superintendent Dr. Patti Neill explained how TCS continues to grow and presented some growth plans to the board that will be determined later.

“For the school board, I just want you to know that these items about growth and where we will put certain programs are to be determined,” Neill said. “This is not a rollout of anything. It’s just a rollout of a preliminary discussion on our future growth in Trussville, and we are growing.”

Neill presented a map representing the growth of schools in TCS.

“So three years ago, we knew we were going to gain 378 housing units in the Paine (PES) zone that would include the Stockton addition, Carrington estates, Winslow Park, Long Meadow, places like that,” Neill said. “So new to the party is the idea and the discussion about Glendale farms that has about 400 units in it.”

“We need to start talking quickly about the fourth elementary school,” Neill said. “We are having growing pains, and you either grow or die, so growing pains are a good thing to have. So I want to share this with you because the discussion about Glendale Farms is timely, and there are three things that we need to consider.”

The three components Neill said that TCS needs to consider are:

“We need to go right along with the city as they debate whether or not to improve the Glendale Farm area,” Neill said.

Neill explained that PES is overcrowded, and a new school could alleviate those problems.

“Pain can’t hold all of those students,” Neill said. “So if you look at the idea of the donated property from the Glendale Farms development, and if it’s approved, then we would come right back to the board to say, ‘hey, is this is where we want to build for elementary school,’ but whatever we do, and wherever we do it, it has to be zoned correctly, it has to be supported by subdivisions and properties around it, and having the land donated is key.”

At the board meeting, Mayor Buddy Choat spoke about the potential school in the proposed Glendale Farms development.

“Looking at the growth of the city, in our 2040 plan, we had a fourth elementary school we didn’t know that it was going to be this soon, but with the population getting to 22,000 people, it kind of snuck up on us,” Choat said. “This is a good development for the city, and it really generates a need for us and for the school, but other than that, it serves a lot of purposes.”

Choat also explained that he has spoken with the property owners concerning the “V at the top of the orange school zone.”

“They assured me if they gave consideration to selling, then the city and all the schools would have an opportunity at it, and I am hoping it’s sooner than later,” Choat said. “We don’t have to have it, but it would help.”

The proposed development includes approximately 20 acres to be donated to Trussville City Schools.

According to comments from developers in multiple public meetings, the elementary school would house 1,000 students, and school officials told him that they could “make it work” by building two stories.

In a BOE meeting last fall, Neill asked board members to “fast track” a new school but never mentioned a specific location. Board members made no comments and had no questions during the BOE meeting.

In other matters pertaining to overcrowding, Neill presented several ideas to the board.

Neill also discussed using the old central office for an alternative learning center. She said that the schools need a place for disruptive students for a short period of time.

Neill went on to explain the student growth and overcrowding concerns at Hewitt-Trussville High (HTHS), which has a capacity of 1600 students, and HTHS has met that capacity. Neill wants to add a new course called the fundamentals of Sports Medicine.

“That is in the Alabama Course Code as an approved elective, and we have someone that wants to teach that, but there is not a place or closet unless there’s a stairwell to put that teacher,” Neill said. “He’s full. Mr. Salem is full, so we need to start making plans for C-Wing because that would be at least a two-year project.”