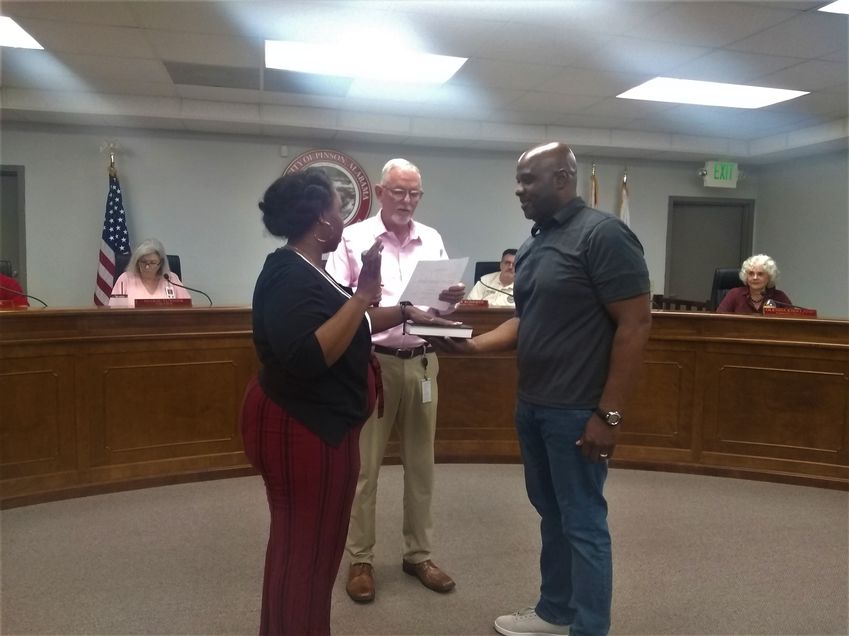 PINSON – The Pinson City Council appointed its newest member during a regular meeting on Thursday, May 19. 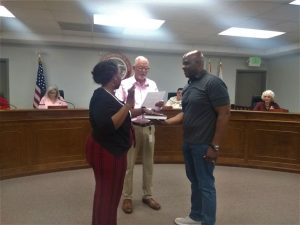 Clinteshia Irvin replaces Dawn Tanner, who served on the council in Seat 1 for more than 18 years before her recent resignation. A resident of the Palmerdale area of Pinson, Irvin was appointed after a 4-1 vote. She ran against Paula Sims.

“I’m excited, and I look forward to serving the city of Pinson,” Irvin said.

Councilman Robbie Roberts spoke highly of both candidates, expressing his appreciation for their application to the seat.

“I want to personally say that I think this has been one of the toughest votes I’ve ever had,” Roberts said.

Mayor Joe Cochran concurred with Roberts, explaining the policy in appointing a member where the council has 60 days to choose one or the governor can appoint one if the seat is not filled. 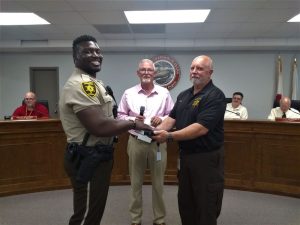 Steve Moise (left) was sworn in as the city’s newest contract deputy.
(Photo by Nathan Prewett)

“I’m very encouraged by the quality of the people we have in our community that want to participate in this council,” Cochran said. “We have youth, we have age, we have experience, we have ideas. It’s just a very difficult decision. It is not easy for us as a council. I hope everyone understands that because if we had our way, we would just probably put them both on but we have only one seat.”

Irvin was sworn in in the presence of family members after the vote was made.

At the beginning of the meeting the council heard from Pinson Public Library Director Allison Scanlan, who recognized two local teenagers on the Teen Advisory Board, which is made up of students in grades six through 12 and volunteer for the library. These were siblings Taylor Grinberg and Jacob Grinberg.

“We have a great group of kids and I don’t know what our library would do without them,” Scanlan said.

Scanlan said that the library decided to recognize outgoing students about to graduate as “Champions” and thank them for their work. She noted that Taylor has put in 220 hours of work for the library and served for six years on the board. Jacob contributed more than 230 hours and has also been on the board for six years. 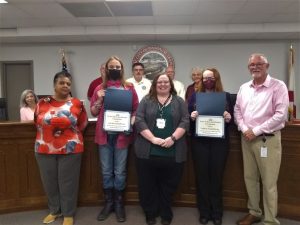 Siblings Jacob Grindberg and Taylor Grindberg were recognized by the council and the public library for their contributions to the library as part of the Teen Advisory Board. (Photo by Nathan Prewett)

“We contract with the Jefferson County Sheriff’s Office to provide deputies that we pay for that take care of ordinances that we have,” said Cochran. “This process allows him to actually enforce city ordinances but he also enforces all the regular laws that we have on the book to make sure that we’re protected. And it gives him an opportunity to do community policing, which oftentimes the deputies don’t get to do. You can tell by the smile I think he enjoys doing it.”

During public comments DieDra Hurdle announced that her independent film “Frienemy For Life” will be wrapped up on May 28 after a year of production. She said that she did not know who will pick up the film but that her company will present it to all outlets.

May 28 will be what she called an “open scene” to be filmed at the park. She asked the council if they would be willing to donate money to feed the cast as the scene is filmed. The council unanimously approved her request.

The Pinson City Council meets on the first and third Thursdays of the month at Pinson City Hall on 4410 Main Street. The meeting will begin at 7 p.m., following a 6:15 p.m. work session.