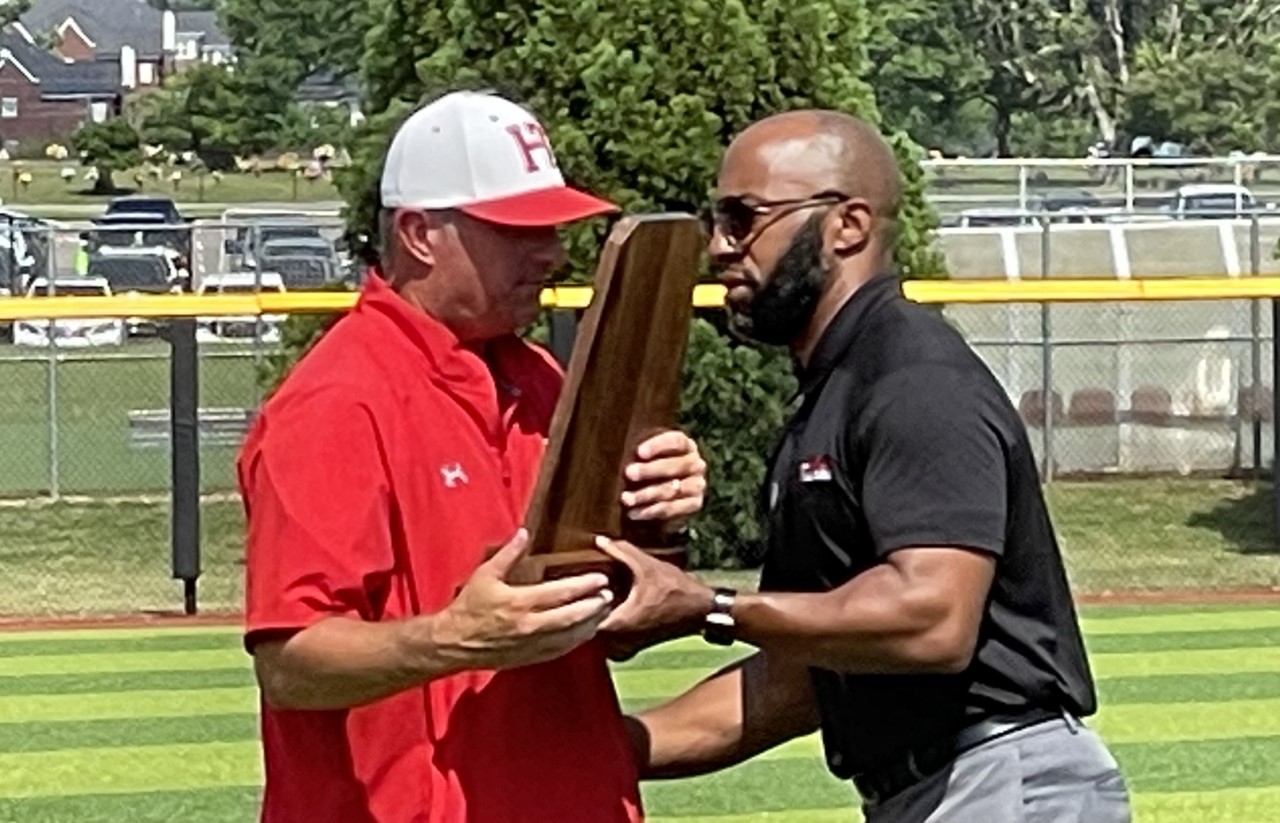 Hewitt-Trussville's Jeff Mauldin accepts the runner-up map for the AHSAA Class 7A Baseball Championship on Saturday, May 21, 2022. (Photo by Bobby Mathews)

JACKSONVILLE — One inning was the difference between Hewitt-Trussville and Central-Phenix City in the final game of the AHSAA 7A baseball state championship best-of-3 series. 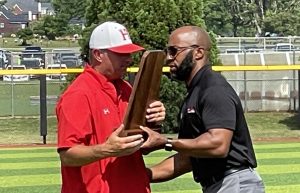 Hewitt-Trussville’s Jeff Mauldin accepts the runner-up map for the AHSAA Class 7A Baseball Championship on Saturday, May 21, 2022. (Photo by Bobby Mathews)

The Huskies allowed three runs in the bottom of the first, and that was enough for the Red Devils to claim the second game of Saturday’s doubleheader and seal the first-ever baseball championship for Central.

“We knew what we were going to face coming into today,” Hewitt-Trussville head coach Jeff Mauldin said after the loss. “We knew we were going to face Landon Russell (in Game 1), who is one of the top players in the state. I thought we had a really good approach to him, but then they had the reliever come in and really settle them down.”

Mauldin focused on the positives from reaching the championship series.

“We didn’t lose the championship,” he said after being awarded the 7A runner-up map. “They won gold. We won silver.”

In the final game, Central’s Jax Yoxtheimer pitched seven innings and allowed eight hits, striking out six and walking one. Most importantly for the Red Devils, he and the Central defense kept Hewitt-Trussville scoreless. The Huskies could never quite take advantage of their chances on the basepaths.

Hewitt-Trussville finished the season 32-6-1. In Game 2, Brett Moseley was 1-for-3, while Ethan Duhon was 1-for-2. Kurt Kizer was 1-for-3, and Matt Miller was 1-for-3 with a triple in the sixth inning that gave Hewitt a chance to get on the board, but it was for naught.

Brooks McRae was 1-for-3, and Riley Quick was 1-for-3 and singled in his final high school at-bat.

“I think our kids showed a no-quit attitude,” Mauldin said. “They kept believing that we would find a way to win until the final out, because that’s what we’ve done all year.”

In Game 1, Central-Phenix City won 8-5 thanks to a 4-run second inning that was the catalyst of the Red Devils’ victory. Hewitt-Trussville made it a game with a pair of runs in the third and cut the lead to 5-4 after the fifth but Central piled on three runs i the bottom of the sixth to put the score out of reach.

Hewitt-Trussville added one more run in the top of the seventh, but that was the last gasp for the Huskies.

Eayn Thomas pitched one inning of no-hit ball in relief of Green.

Hunter Whippert got the win for Central, pitching four innings in relief of Landon Russell.