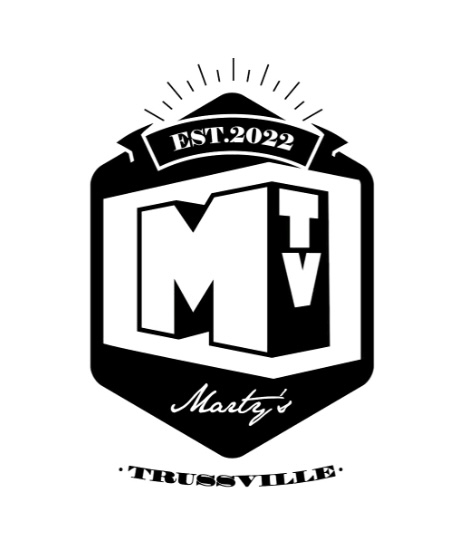 Marty’s Trussville will be the new ‘local watering hole’

TRUSSVILLE — A third Marty’s location will be opening in Trussville at the end of June; 29 years after the iconic Marty Eagle opened the original Marty’s in the historic Five Points District of Birmingham. 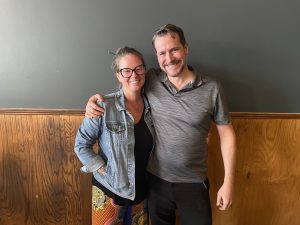 (From Left to Right) Sarah Thurmond and Joshua Braden. (Photo by Hannah Curran)

After Marty’s passing in 2013, Phill and Marsha Mims took over the Five Points location and tweaked the name to Marty’s PM. The Mims made slight changes to the location, but a lot of it remains the same as a tribute to Marty and all he had done.

Marty’s GM is the second Marty’s location located in the Irondale area and has been a proud member of the local community and Irondale’s only sports bar since 2018.

The Mims, wanting to expand and reach more people, have always wanted to be in Trussville, but the timing was the one barrier that stood in their way.

Nothing stands in their way now as Marty’s TV, located at 1423 Gadsden Highway, Suite 131, pushes forward on the newest adventure.

Marty’s TV General Manager, Sarah Thurmond, said Irondale is a great community spot, and it brought everybody to a fun place to hang out.

“It’s a restaurant bar, and then in October, we expanded, and it became a more bar setting,” Thurmond said. “So it gives a little bit of everything for everybody. So we’re extending that bar setting out [to Trussville]. We hope it’ll be like a good community ‘Sports Bar, Happy Hour, late-night spot’ for all the industries or the restaurant industry folks that are out here that don’t have anywhere to go when they get off work.”

Thurmond explained that when you work in a business that doesn’t close early, it’s hard to find a place to go that offers delicious food with a relaxing atmosphere.

“There’s nothing once nine or 10 o’clock hits because everything closes,” Thurmond said. “For the people that don’t close that early, or have the cleanup time afterward, it gives them a space to grab food, grab a drink, and hang out outside of business place. With the live music and the karaoke and the events like that, it gives everybody a chance to participate, rather than you’re Happy Hour crowd.”

The other two Marty’s locations both have live music and karaoke. Thurmond explained they started bingo at Marty’s GM and also do a type of trivia game.

“We hope to incorporate all those out here with rotating days to complement the GM location,” Thurmond said. “So we’re hoping to have live music weekly karaoke, maybe twice a week. We’ll have to figure out a trivia schedule, and then bingo.”

Joshua Braden, Marty’s TV kitchen manager, said there will be a game room set up that will have dartboards and old-school arcade games.

The Trussville location will serve food and alcohol. Braden explained that they are still working on the menu, but he can guarantee that the famous Marty’s Burger and Marty’s Patty Melt will be on the menu. In addition, the Marty’s TV menu will be similar to the other two locations.

Thurmond explained that Marty’s TV will be a 21 and up bar, and it’s a nice place with a laid-back atmosphere. She also said that everyone will be ID’d to be allowed inside the building.

“We can make cocktails, but we don’t have to; we can serve draft beer and craft beer,” Thurmond said. “A little bit of everything for everybody, and everybody’s treated like family across the board. We have a particular license; we can be a 21 and up, and that being said, we will hold true to that and honor that, that you will have to be 21 to come in, period.”

Marty’s TV is hiring for front and back house staff. If you want to email Sarah Thurmond at sarah.a.thurmond@gmail.com or Joshua Braden at jabraden44@gmail.com