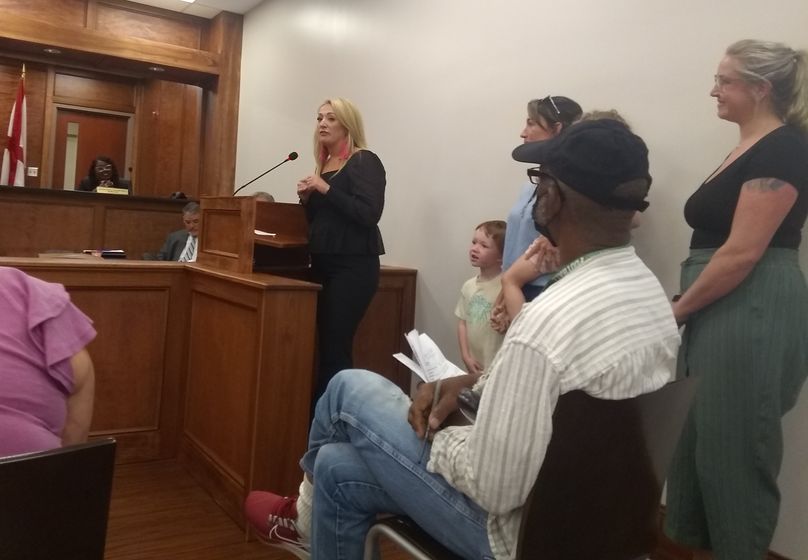 LEEDS – Much of the Leeds City Council meeting on Monday, June 6, concerned the city’s recent entrance into the Main Street Alabama program, as well as an audit report. During public comments, some residents voiced further concerns about the library. 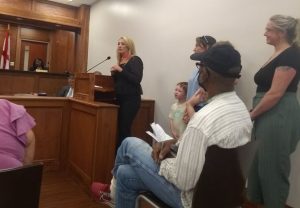 During reports from department heads before the regular meeting, Police Chief Paul Irwin said that there had been an increase in traffic accidents, particularly around the Buc-ee’s area, and advised the public to be careful.

Fire Chief Chuck Parsons announced that the Greenwave-decorated ladder truck has been finished and will be delivered to Leeds in the coming weeks.

Parsons spoke later in the meeting as the council considered a resolution to authorize an agreement with the Leeds Water Works for the use of a building that will serve as a training facility for the fire department.

The property is located at Thornton Avenue Northeast near the Water Works Board building. Some details and a rendering of the facility can be seen on the agenda packet.

In his comments, Mayor David Miller announced that funds would be allocated to be used for the start of the Main Street program that will not need a budget amendment.

“I’m happy to say, as far as my report, is that we have found some funds for the Main Street kickoff without having to do a budget amendment,” he said. “We have some funds and a related account that we can use for that purpose.”

The Main Street Committee will open a bank account in order to use the funds.

During public comments, some residents spoke in support of the Main Street Program, including Judd Moore, who addressed what he said was possible “miscommunication” on “what Main Street is.”

He said that there had been criticism from other cities that have been involved in the program, supposedly not succeeding in helping them.

“This is totally incorrect, totally not right,” he said. “Main Street has never been defeated on helping a city succeed.”

Another to speak was Leeds High School teacher and coach Jesse Turner, who is the son of Councilman Eric Turner. He said in support of the program, calling it a movement. Jacob Meyer later spoke and thanked the council for its presence at a past presentation for Main Street.

Kristie Biddle and Tiffany Ward, who have spoken at past meetings, introduced Amber Vine, who has been hired as the executive director to focus on the downtown area. They announced that the kickoff date is June 21.

The council heard from two representatives from Cork, Hill, and Company, which performed the audit that examined the city’s financial statements. Audit manager Joe Chapman stood and delivered an overview of the report.

A draft of the report can be seen on the agenda packet.

Afterward, the council authorized a hiring freeze for all city departments. Miller said that this is due to the inflation that has been affecting the nation. He said that one of the “hardest hit” aspects of the city is any petroleum service such as asphalt and fuel for cars.

“One of the few ways we have to control our expenses is personnel costs,” he said. “Right now, our departments are at strength or near it, and this [resolution] would allow us to keep the personnel costs at the present level.”

When public comments were opened, Miller said that the council would not speak on the matter of an employee of Leeds Jane Culbreth Library who was recently terminated due to a potential legal issue. He requested those speaking about funding to give their thoughts to the board, which would make any proposals for budget expenses next year for the council to consider.

Several spoke generally on the library, with the exception of Lindsay Bolcar, who said that she signed up to speak on state funding for the library. However, she was disallowed to speak, with Miller repeating that the council would not address this particular topic on the personnel or funding.

After the meeting, Bolcar shared with the Tribune that she had wanted to bring up information from the Alabama Public Library Service regarding state funding policies to libraries.

According to the information she cited, state funding depends on meeting qualifications to have a five-year aid plan, such as having a qualified director. Currently, the library has an employee acting as interim director following the resignation of Melanie Carden.

Among other qualifications is to maintain a minimum number of hours based on population size, though Bolcar said that the library has had to close earlier than usual due to what she said were staffing issues. Not meeting the qualifications could mean losing state aid.

Ernest Mitchell spoke and, among his comments, raised concerns about the Moton parking “not having anything for our children” and asked if the council to give specifically $3,000 to hire youths to clean up certain streets in the city in response to their allocation of money to Main Street.