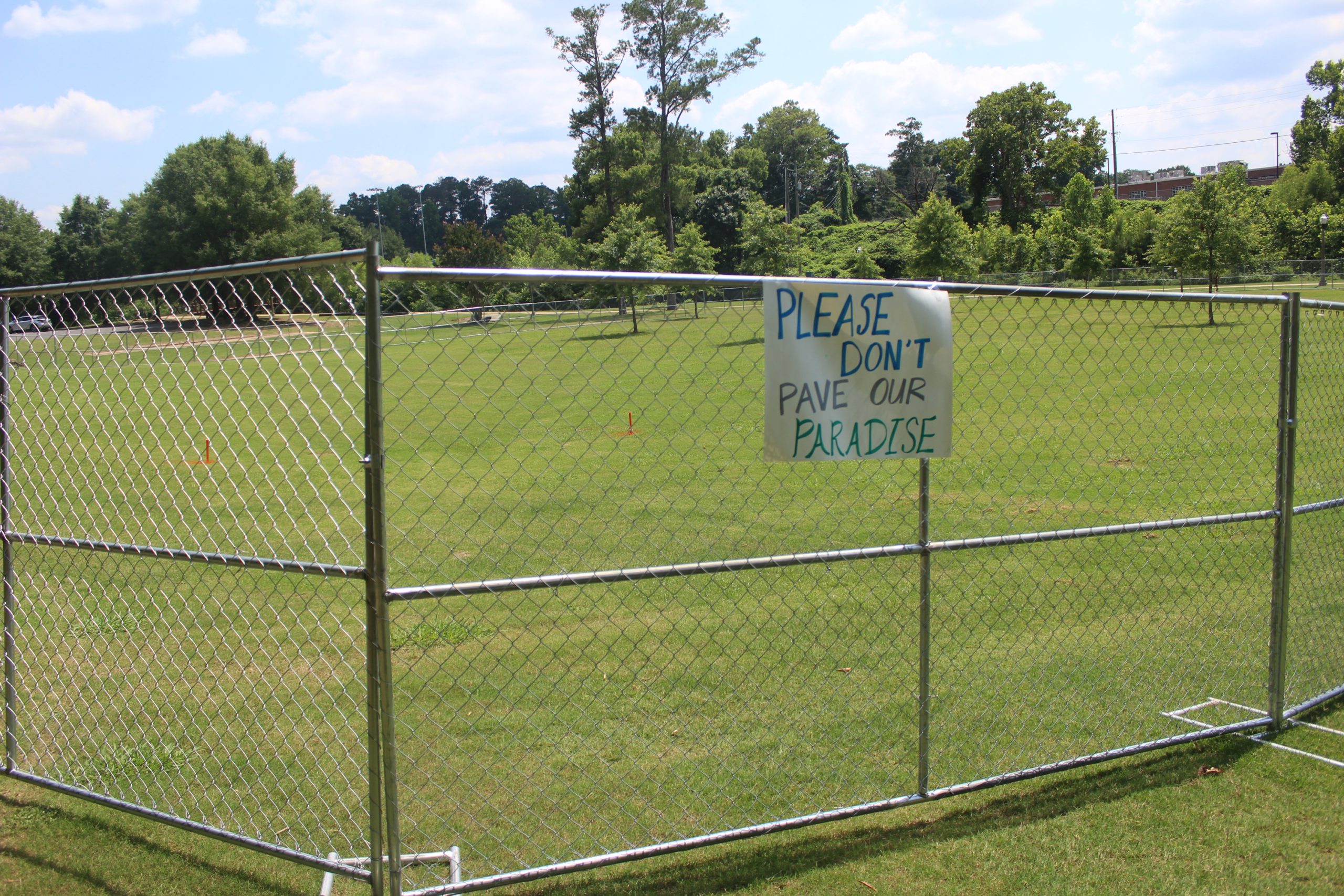 Citizens hung signs along the fence where the pickleball courts are to be built. (Photo by Hannah Curran)

TRUSSVILLE — Twelve new pickleball courts are in the process of being built next to the Trussville Senior Center. 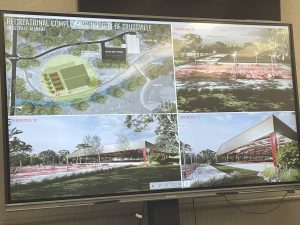 Mayor Buddy Choat explained the planning of the pickleball courts has been in the works for over a year. After seeing the courts ‘ success in Clay, Choat worked with Barrett Milam, Vice President of Milam And Company.

The area would have four courts outside and eight courts under a structure. The covered facility design would allow pickleball participants to play through rain or shine without setbacks. The covered structure will run sideways between the road and the walkway, and the uncovered courts will run alongside the structure on the Cherokee Drive side. Choat explained that the courts would be made out of asphalt.

“They’ll be like normal tennis courts,” Choat said. “They put that synthetic surface at the tennis center, but we’re not going to use that because it’s a lot more expensive. These folks are used to playing just on a regular surface like tennis court surfaces.”

However, the courts have received some backlash from residents in Trussville. The area where the courts are to be built has been known to flood, and some are concerned about the drainage issue when the courts are completed.

The current plans for the courts to ease the drainage problem would be to raise the elevation around four feet.

“It would be built up above what is in the floodplain right now,” Choat said. “So the water coming from the facility, of course, is not going to come from the courts because the roof’s pitch will cause the water that’s going to come off on the side closest to the senior building to go into the natural drain there.”

Choat said there would be some work to ensure that drainage flows properly.

“The water that runs off the roof is probably going to be less than what would be on the ground anyway, as far as if it fell where the courts will be,” Choat said. “The other drain is on the backside, since the cover is gonna end, and there’s going to be a grassy area there, the other courts will not have a drain problem because it’s following the natural flow that’s there.”

Choat said he doesn’t believe that there will be any new pipes that will need to be put in because the drainage will follow where the flow is right now.

Community members have asked want the environmental impact would be on the Cahaba, and Choat said that he believes the new courts would not have a significant impact on the environment.

“We didn’t really see that it was going to cause any effect on the Cahaba, other than what is there now because this is not going to be something where it just flows down, it’s gonna be subtle just like it is now,” Choat said.

There are around seven trees within the fenced-in area that will be removed. Choat said they had reached out to the Trussville Tree Commission to see if they would be able to move them, but due to the time of year, moving the trees would not be an option.

“It is highly unlikely that the oak trees there would survive if they were transplanted in the middle of Summer,” Trussville Tree Commission’s Jean Cox said. “It is possible to move established trees. But, it is something that would need to be done in the Fall or Winter to be successful. We have not seen any of the plans for this project, and the tree commission was not involved in the planning in any way, but we do hope that the plan includes thoughtful landscaping and replacement trees. ”

Some questions were raised about the courts’ impact on the Trussville Senior Citizens. Choat explained that most pickleball played on the Trussville courts is in the late afternoon or evening and on the weekends.

“The senior citizens leave the center around 4:30 p.m., so right now, the parking lot would be available for use, and we will continue to let [pickleball players] park along the drive like they have been doing for disc golf,” Choat said in a previous interview. “Also, the Senior Citizen Center is not open on the weekend, so parking would be available then.”

Choat also said that some of the Senior Citizen’s have mentioned they are excited about the new courts.

One of the disc golf holes will need to be moved to a new area, but Choat said the other holes will still be available for citizens to play on.

The pickleball courts are said to not only better the city but could potentially bring in more revenue.

Choat explained that the funding comes from a Park and Recreational grant from the state.

“Senator Shay Shelnutt was able to get some funding to the state that should pay for the entire project, we’re estimating it to cost somewhere around a million dollars,” Choat said in a previous interview. 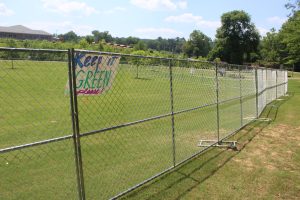 Citizens hung signs along the fence where the pickleball courts are to be built. (Photo by Hannah Curran)

Some members of the community voiced their concerns as to why they were not given the opportunity to speak on the matter. Choat explained it’s the mayor’s and council’s job to do what they think is best for Trussville.

“At the end of the day, our job is to do what is best for Trussville, what we think is the right decision. I’ve always felt like that as a council member and as a mayor, and be willing to stand by it and let it play out and see how it all falls out,” Choat said.

Choat said that pickleball courts should be completed in six months. The covered courts will be 156 x 158 and the uncovered courts would be 64 x 136.

Tune into Tribune Unscripted on Thursday, June 23, at 12 p.m. to hear Choat address the concerns about the pickleball courts.