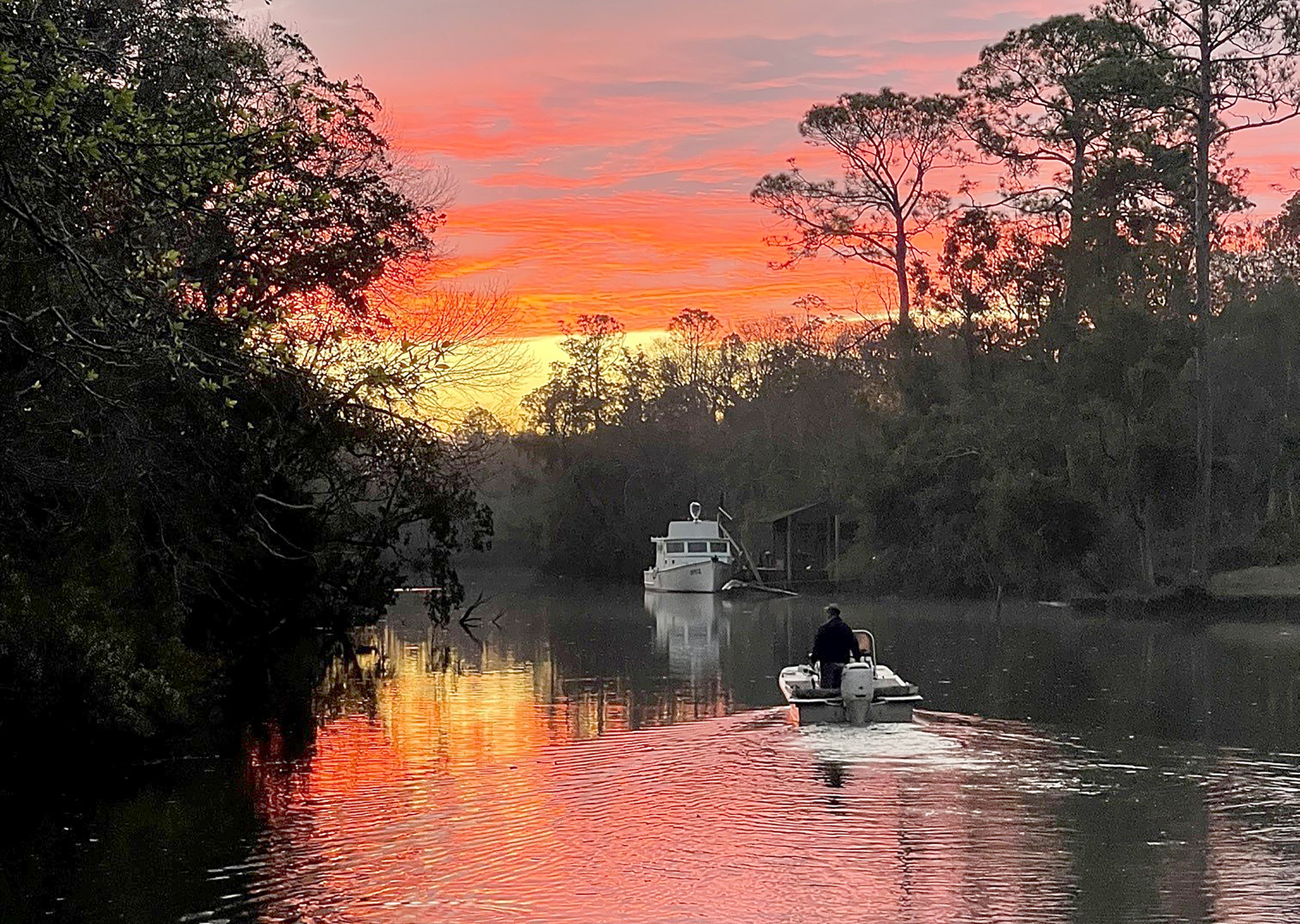 The Lloyd-Worcester Tract includes this beautiful vista on Waterhole Branch on the west side of Fish River. (Photo courtesy of Daniel Galbraith)

Protecting a nationally recognized estuary in a rapidly developing coastal area can be a bit like putting together a puzzle where the pieces are constantly being shuffled and changed. This is exactly the challenge faced by the Alabama Department of Conservation and Natural Resources (ADCNR) Weeks Bay National Estuarine Research Reserve. 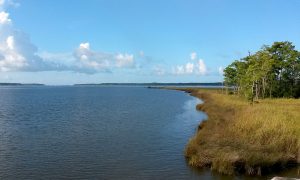 Managed by the ADCNR State Lands Division (SLD) and funded in part through the National Oceanic and Atmospheric Administration (NOAA), Weeks Bay Reserve is part of a network of thirty protected estuaries around the country. The Reserve System was established to provide research, education, and outreach related to understanding the function and management of estuaries, which provide important ecosystem services such as protection from storm surge, removal of nutrients and pollutants from coastal waters, and serving as a nursery ground for recreationally and commercially important fish and shellfish.

Will Underwood, Coastal Section Administrator with the ADCNR SLD, said that part of the long-term strategy for maintaining the health of the waters of Weeks Bay includes willing-seller land acquisition.

“Successful acquisition of land in a rapidly growing area such as Baldwin County requires a great deal of teamwork with partners,” said Underwood, who assists with land stewardship efforts at the Reserve. “We have been fortunate to have access to a variety of funding sources over the last decade – including competitive funding from NOAA, support from the Alabama Forever Wild Land Trust, and funding from the Deepwater Horizon Natural Resource Damage Assessment Alabama Trustee Implementation Group (ALTIG) – that have allowed for acquisitions in the Weeks Bay watershed.”

Flexibility is the name of the game, says Underwood, when it comes to leveraging available funding. For example, when a parcel initially slated for purchase with NOAA funding fell through, ADCNR quickly pivoted and identified other willing-seller tracts in the Meadows (County Rd 1) and Sunset Shores/Swift Tract areas surrounding the Weeks Bay project area. Working with matching funds from the Forever Wild Land Trust, these parcels were ultimately acquired for the benefit of future generations.

“We are always looking for ways to make our land management efforts at the Reserve more efficient and effective,” Underwood said. “Tying these parcels together allows us to conduct prescribed fire activities in a manner that better mimics natural burns and reduces the cost of installing and maintaining duplicative fire breaks.”

The three most recent acquisitions in the watershed include the Holmes Tract, 90 acres on Magnolia River at the intersection of Weeks Creek and Magnolia River; the East Gateway – Williams Tract, a 163-acre parcel at the mouth of Weeks Bay; and the Lloyd-Worcester Tract, a 60-acre parcel on Waterhole Branch and Green Branch on Fish River. These purchases were primarily funded through the ALTIG as part of Deepwater Horizon Natural Resource Damage Assessment funding. Additional funding was provided through a NOAA competitive grant opportunity. Underwood said the three parcels will protect over 3 miles of shoreline in the watershed, and with these parcels, the families made the decision that they wanted to be involved in conservation as part of their family legacy.

“We have some family history on the Holmes Tract,” said Underwood. “It’s a family connection of long-term ownership. Broox Holmes, who is in his mid-90s, is really proud of the heritage there. His father, Dr. W.C. Holmes, a local physician and Alabama State Senator, was instrumental in the state’s purchase of land in the 1920s for the establishment of Gulf State Park. Dr. Holmes and his wife, Philomene, once planned to build a family home on the parcel, so the family was very happy to see it preserved.” 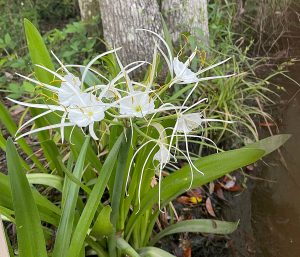 The spider lily is one of the many species of flora in the Weeks Bay watershed. (Photo courtesy of Daniel Galbraith)

“There’s a lot of history in that area as well,” he said. “There was actually a hotel across the river, the Woodbound Hotel, which was a resort at the turn of the 20th century.

“That tract has some really nice ground with old longleaf pine with intact understory, and then it grades down to the river. There’s some really nice habitat. The ecological benefit of that purchase is that it preserves longleaf pine habitat, but there’s also bay swamp and Atlantic white cedar, which is a boat-building wood, but there’s a butterfly (Hessel’s Hairstreak) that uses it almost exclusively. And there are gopher tortoises on that site as well. It’s a unique habitat in a compact area.”

Underwood said the Holmes Tract will be managed with prescribed fire to maximize the longleaf pine habitat.

“The prescribed fire will be done after very careful planning because it’s been a long time since there’s been a fire,” he said. “We’re going to do some careful entry burns to reduce the heavy duff layer so we can do regular growing season fires. We’ll start with some cold season burning to the reduce the duff and reduce possible mortality of the mature longleaf. I think the last fire on that tract was in the ’70s. We’ll have to work really hard to do fire the right way on that tract.”

The East Gateway – Williams Tract is a mix of tidal marsh with a tidal creek and an adjacent upland that has enough elevation that it could have attracted possible developers.

“This tract provides a space for marsh migration so that marsh can move up slowly as sea levels rise and can move into that adjacent upland,” Underwood said. “It basically provides a buffer at the mouth of Weeks Bay to maintain ecological function. That marsh is so important in filtering nutrients, providing a buffer from storm surge and provides nursery grounds for many of our commercially and recreationally important fish and shellfish species. And it preserves the entrance from Mobile Bay into Weeks Bay.”

The Lloyd-Worcester Tract is 60 acres at the confluence of Waterhole Branch and Green Branch on the west side of Fish River.

“It, too, is a peninsula, so it has intact forest edges with bay swamp and white cedar,” Underwood said. “There’s an old pasture on the property that we will convert back into longleaf pine. There will be a reintroduction of fire there as well. It also has gopher tortoises.”

“The area is growing so rapidly; it’s important to protect areas of shoreline with significant ecological and aesthetic benefits,” he said. “We can see the river as it looked almost 100 years ago.

“On all three parcels, SALT worked with the landowners through the negotiations process, secured purchase agreements with the landowners, and supported ADCNR with due diligence, surveying, and appraisals,” he said. “They also provided a cash contribution for the purchase of the Holmes Tract. SALT was a vital partner in bringing these acquisitions to closing.” 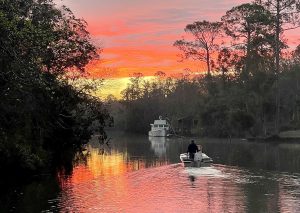 The Lloyd-Worcester Tract includes this beautiful vista on Waterhole Branch on the west side of Fish River. (Photo courtesy of Daniel Galbraith)

“Amy’s team did the lion’s share of the work behind the scenes to make these acquisitions happen,” Underwood said. “There was a lot of environmental review. It was a long process to get each parcel finished. We are grateful for their hard work and for the support of Commissioner (Chris) Blankenship in supporting these important additions to the Weeks Bay Reserve.”

ADCNR Commissioner Blankenship added, “With the rapid growth and development we are seeing in Baldwin County, when a parcel becomes available for conservation, it takes everybody coming together and pooling all our resources to make all these acquisitions a reality. We are also very appreciative of the landowners and their families who demonstrated a commitment to land conservation and stewardship by making these valuable coastal properties available to ADCNR.”