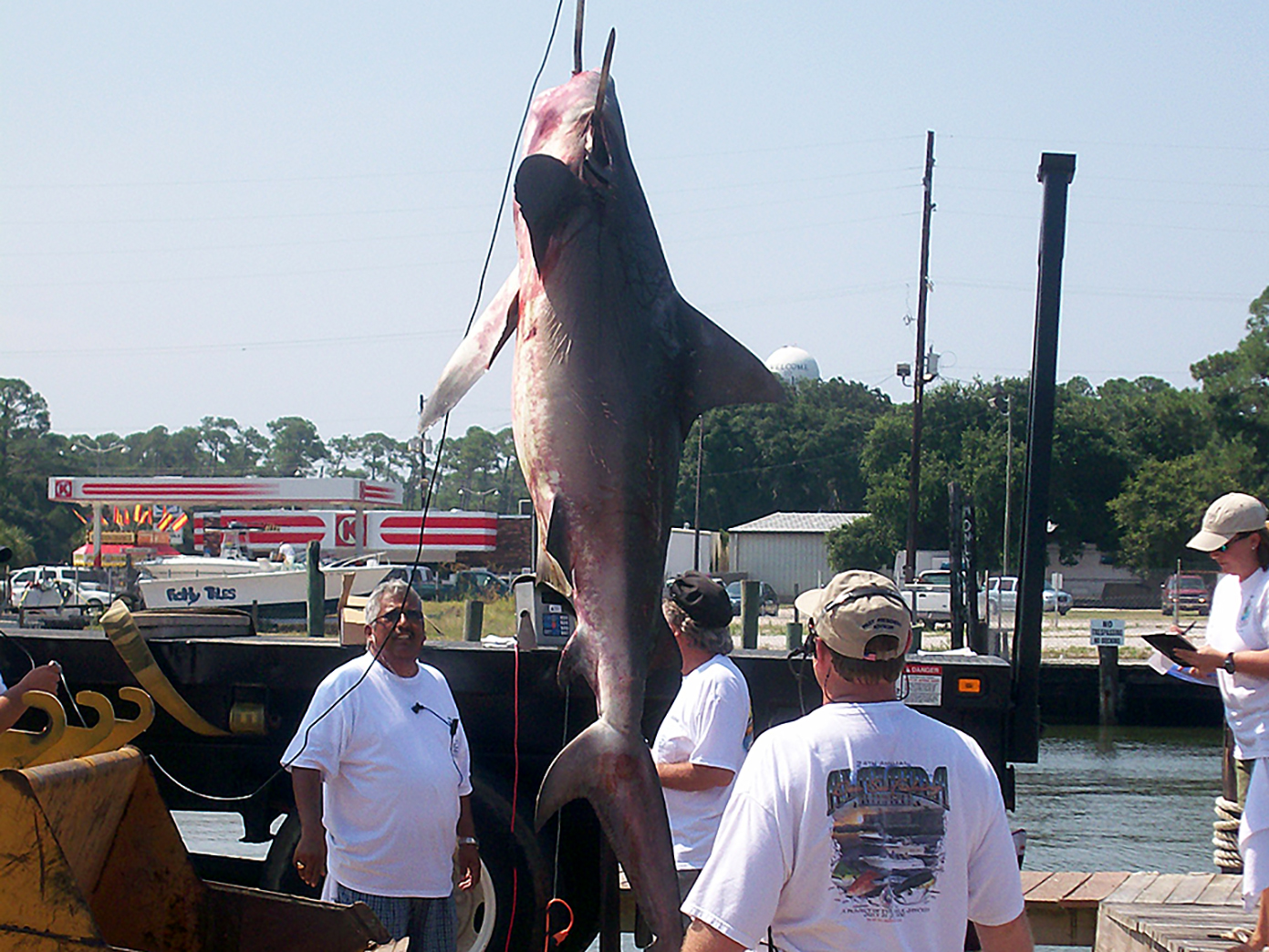 Although frustrating to anglers, Dr. Sean Powers says that plenty of sharks in the Gulf indicate a healthy ecosystem.(Photo courtesy of Marcus Drymon)

At the request of anglers and spectators, the Alabama Deep Sea Fishing Rodeo (ADSFR) will again have a shark category for the 89th annual event, scheduled July 14-17 at the rodeo site on Dauphin Island. 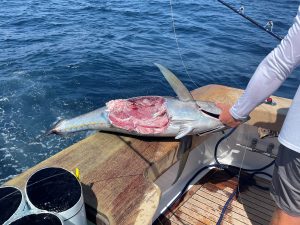 Anglers in the 89th annual Alabama Deep Sea Fishing Rodeo will again be able to compete in the shark category. (Photo courtesy of Jim Cox)

Of course, ADSFR officials checked with marine scientists to ensure bringing the category back was ecologically sound.

“It’s been about 7 years since we had a shark category,” said Mark Schambeau, this year’s rodeo president. “We had a lot of requests from anglers and spectators to bring sharks back. So, we started talking to Dr. Sean Powers with the University of South Alabama (USA), Dr. Marcus Drymon of Mississippi State and a few others. We wanted to know about the stock assessment for sharks and how their numbers look in the Gulf of Mexico. They told us they were back to good numbers. They gave us a go-ahead to consider bringing the shark category back.

“We talked to a lot of anglers about bringing it back. They were all excited and wanted to help fund bringing it back. We have shark as an open category, but we also have a shark jackpot, sponsored by Gulf Hauling and Construction, which is funded through a lot of the anglers. This year we are giving away a guaranteed $12,000 for first place.”

Anglers who participate in the rodeo’s shark categories are required to possess an Atlantic HMS (highly migratory species) permit with a shark endorsement (hmspermits.noaa.gov) from NOAA Fisheries.

“We only want the large sharks, the mature sharks,” Schambeau said. “We don’t want small sharks. We put large minimums on those sharks because we don’t want a free-for-all. We will be making regular posts on our social media to educate anglers on the legal sizes and species for our tournament.

“Another reason to have larger minimums is to make it easier to identify. That’s why we selected certain species, to help reduce any misidentification. We won’t allow any of the protected shark species to be brought to our docks.”

Anglers aren’t the only ones excited about the return of the category. Marine scientists will be able to obtain valuable information from the sharks brought to the rodeo.

Powers, professor and director of the new USA School of Marine and Environmental Sciences and head rodeo judge, said the top comment from anglers and spectators at the rodeo was about bringing the shark category back. He said the timing is right.

“The spectators enjoy seeing them,” said Powers. “The fishermen, not so much that they want to fish for them, but they have seen sharks in this area increase dramatically in abundance. Fishermen, especially snapper fishermen, are experiencing a lot more bite-offs because of sharks. We, as scientists, call it depredation. That’s when you hook something and another species that you don’t mean to hook comes and eats it.”

Powers said the likely culprits in the depredation are sandbar and bull sharks. The sandbar is one of the protected species except for limited scientific collection.

“The rodeo came to us and wanted to know if we agreed with their decision to bring the shark category back,” he said. “I told them, yes, because I trust the science that goes behind management. As long as you are harvesting within the regulations in terms of species and size limits, then, yes, you can harvest them. That’s what the best science tells us. My big thing is to make sure we educate the fishermen on the regulations.” 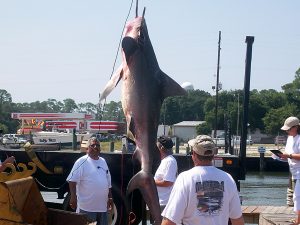 Although frustrating to anglers, Dr. Sean Powers says that plenty of sharks in the Gulf indicate a healthy ecosystem.(Photo courtesy of Marcus Drymon)

The benefit of harvesting the sharks during the rodeo is that the specimens will be used to advance the data collection of the species. Marine scientists will collect vertebrae, stomach contents and reproductive organs to conduct a battery of tests.

“These sharks will not be wasted,” Powers said. “They will be used for science.”

While anglers may complain about the number of shark encounters on a fishing trip, Powers assures everyone that an increase in shark numbers is a good thing.

“This is what a healthy Gulf looks like,” he said. “We’ve been fishing for the past 40 years with a shark population below where it should be. It’s frustrating to lose a snapper or tuna to a shark, but it’s a healthy ecosystem when we have lots of sharks in it.

“To eliminate killing a lot of sharks for no reason, the rodeo went with a higher size limit than the regulations. We just want people to bring in sharks that are really large and can compete for prizes.”

Powers said the species were chosen because they are easier to identify, and they grow to larger sizes.

“Anyone can catch a blacktip shark,” he said. “We’re really looking for the big tiger and bull sharks. Those are the ones that are really going to challenge the anglers, and we can harvest them sustainably.”

As far as identifying the species, Powers said some anglers may confuse blacktips with spinner sharks, but he said spinners don’t grow large enough to meet the minimum size.

He also said the way to differentiate between a sandbar shark and a bull shark is found on their backs.

“The thing is everybody calls everything, except a tiger or a hammerhead, a bull shark,” Powers said. “They need to make sure they know the difference between a bull shark and a sandbar shark. One thing is the bull shark is stocky and the dorsal fin is not as big. But the main difference is a sandbar shark has a ridge down its back from its dorsal fin to its caudal fin. A bull shark does not have a ridge. If it has ridges, it better have stripes (tiger shark) to keep it.

“We’re excited to have sharks back. We want to get those specimens.”

In previous years, sharks were displayed on a rack between two pilings on the south end of the rodeo site. This year, Killer Dock has constructed a large hanging rack on the north side of the property that will be a significant upgrade.

“The old shark rack has always been a traditional sight at the rodeo,” Schambeau said. “We are not bringing that down. With the Killer Dock hanger, we will be able to display the sharks in a better way and allow the spectators to get a better view. It has a shaded canopy, and hopefully it will keep the sun off them a little longer.”

The rodeo will also add a red snapper jackpot to this year’s event to go with the regular category and cash prizes division.

The red snapper harvest, as of June 20 this year, was estimated at only 175,619 pounds. Weather conditions and high fuel prices have reduced the fishing effort so far this summer, which means the snapper season could last into the fall if the quota of 1,122,662 pounds is not projected to be met.

Billfish has also been added to the open categories, bringing the total number of fish categories for the rodeo to 33.

Schambeau, who has been a part of the rodeo crew for 14 years, said rodeo participation continues to climb despite the COVID pandemic and other factors.

“We set the Guinness World Record for the number of anglers in 2011 or 2012 with just over 2,200 anglers,” he said. “Last year, we sold more than 4,200 tickets. The numbers have always gone up. The interesting thing during COVID for the 87th rodeo is we still had a high number fishing the tournament. When you’re out fishing, you’re not in large groups, so they still participated in the tournament. We didn’t have the music or big crowds, but the actual angler participation was very high.” 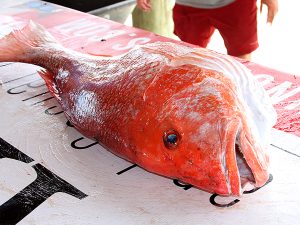 Plenty of beautiful red snapper will come to the weigh station during the rodeo. (Photo courtesy of David Rainer)

The rodeo kicks off at 6 p.m. on Thursday, July 14, with the Captain T-Bone’s Liars Contest, followed by music from Trotline. Friday’s music will be provided by the Velcro Pygmies, while Blackwater Brass will be on the stage at 5 p.m. Saturday.

As usual, the 64th annual Roy Martin Young Anglers Tournament will be held Saturday, July 9, at the rodeo site. The event is open to anglers 15 years old and younger. Tickets are $5 and can be purchased before the event or at the rodeo site on tournament day.

The Mobile-Area Children’s Charity Expo will also be held in the sponsors tent from 2 p.m. to 6 p.m. during the Roy Martin event.

“We have invited all the Mobile-area charities involved with children and young families to come down,” Schambeau said. “We will give them this space for free to show the good they are doing in our community, possibly raise funds and recruit people to their good causes.

“That’s one thing about our tournament. We’re community-minded and want to continue to help.”

Visit www.adsfr.com for details about the event, including tickets, rules and regulations.