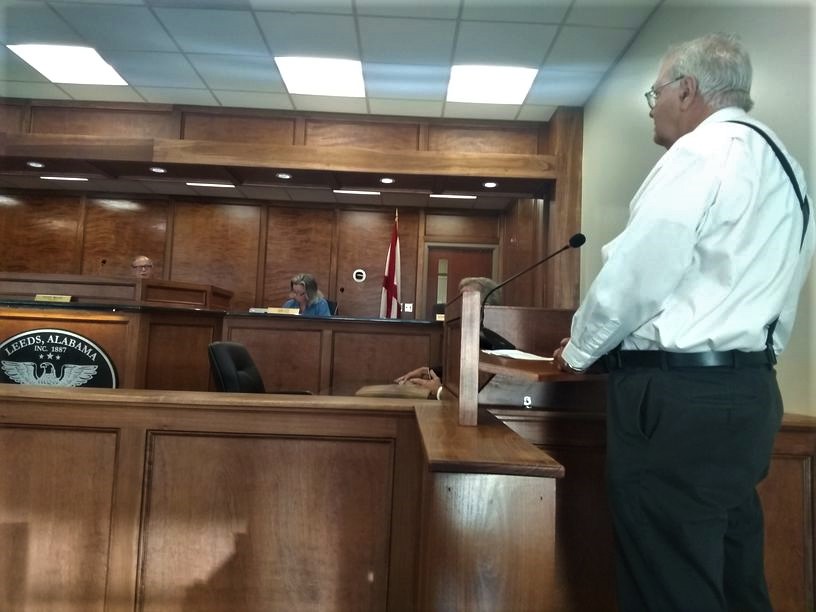 Kenneth Hurst (right) speaks to the council about the ongoing library controversy during a meeting of the Leeds City Council on Tuesday, July 5. (Photo by Nathan Prewett)

LEEDS – At a meeting on Tuesday, July 5, the Leeds City Council approved a 12-month extension of a moratorium on R-5 and R-6 zoning applications, among other actions. 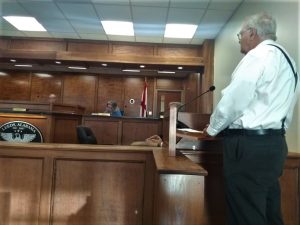 Kenneth Hurst (right) speaks to the council about the ongoing library controversy during a meeting of the Leeds City Council on Tuesday, July 5. (Photo by Nathan Prewett)

Later in the meeting, the council approved a request to go into executive session to discuss pending litigation. Around 40 minutes later, the council returned and added a new resolution to the agenda, which concerned a solid waste franchise agreement and contract enforcement in regard to complaints by citizens.

The city currently has a contract with Ecosouth for waste management. The resolution imposes a fee of $250 to the company if a customer complaint is not resolved within 72 hours.

He said that when he visited the library that day before the meeting, the saw that the library was doing better but that it was still “in the ICU.” He credited the library supporters and staff members, as well as the city government’s allocation of funds for the help.

“The library seems to be taking baby steps back towards normality,” Hurst said. “But what I would like to say to the council and ask to be considered is what is the normal (he paused here to silence his cell phone). What is the normal that we want once things have settled down?”

He added that the library should be able to operate during banking hours, as well as the evening and on Saturdays.

Hurst’s comments were the latest in an ongoing controversy surrounding the library and the city’s funding decisions. A number of residents supporting the library have spoken, levying criticisms at the council and Mayor David Miller.

Miller responded to Hurst’s comments, saying that the city has supported the library but that there was a supposed mismanagement of $97,000 (this deficit was forgiven in a past meeting). He pointed out the allocation of $100,000 made several months before.

He spoke on an issue in the past where plans were being made to build a new library with funds from an ad valorem increase, but that the increase was opposed by the library staff. He said that allegations were raised that the city intended to build a library that was smaller than the current one with the ad valorem funds.

He claimed that misinformation has spread about the city government’s attitude to the library, many of these being online on social media. He also added that city funding has been complicated by inflation but that they intend to support the library when the budget is finalized.

“We’re with you,” he said. “Were a hundred percent with you. We want the same library you want or even better. And we’re going to fund it, we’re going to get new people in there.”

Miller thanked Hurst for his thoughts, with Hurst thanking him for his time to speak before the meeting was adjourned.