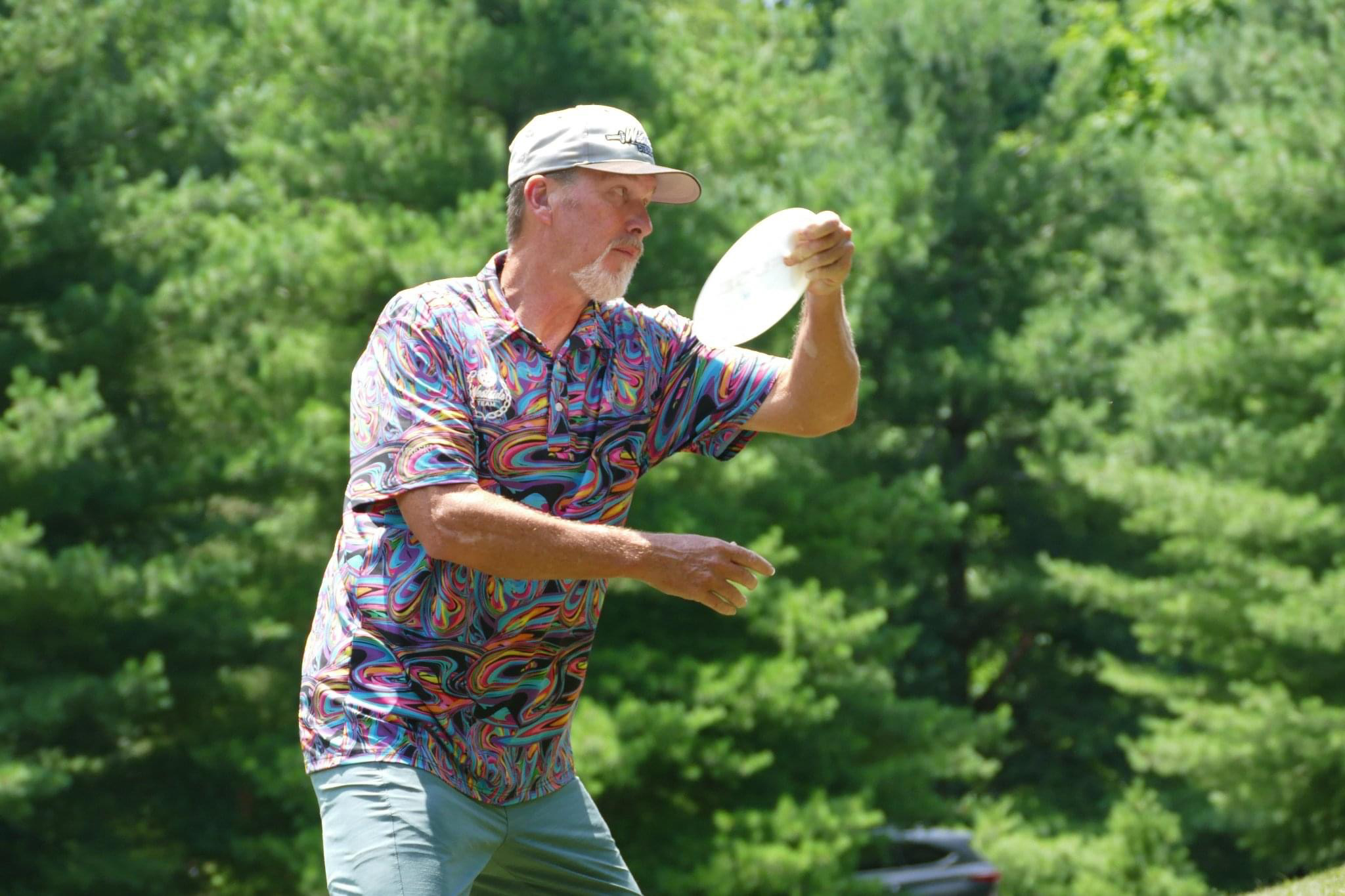 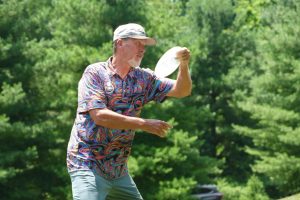 Since turning professional 23 years ago, Keith has developed into one of the more dominant players on the PDGA circuit, with 80 wins under his belt out of 248 events, and earning more than $60,000 in prize money during his career.

Now 61, the easy-going Keith is also one of the most respected people within the disc golf community. Not only a competitor, Keith has also designed or consulted on many disc golf courses throughout the region while tirelessly working to promote the sport to anyone who will listen.

Keith became interested in flying disc sports around the same time many people of his generation did — the 1970s. It was during this ultra-groovy decade that Ultimate Disc, Disc Golf, and freestyle flying disc competitions bubbled up into the mainstream from the post-1960s California subculture. For an accurate mental picture, think denim cut-off shorts, tank tops, and striped tube socks yanked up as high as they will go.

“I was one of those guys,” said Keith. “I had the tube socks all the way up to my knees, Converse tennis shoes, the super short shorts, and the headband.”

Keith’s entry point into disc sports began in 1975 with Ultimate Disc, a team sport resembling a mashup of football and soccer. Soon thereafter he started dabbling in disc golf for fun when many disc golf courses included little more than discs being thrown at trees and other targets.

For more than 20 years, Keith continued to play disc golf recreationally, while watching the sport become more organized and grow in popularity. However, it wasn’t until 1999 that Keith decided to enter his first tournament as an amateur. “I had always played,” said Keith, ‘but didn’t know how to gauge myself and didn’t know how good I was.”

As it turned out, he was quite good. Not only did Keith win his first tournament, he quickly realized his score would have placed him in second place in the professional division. It didn’t take Keith long to realize he had a real shot at being competitive on the professional level.

“I thought I’d rather play for money than play for prizes,” said Keith, “and I’ve been playing pro ever since.”

In late 1999, Keith made his professional debut at a PDGA event at George Ward Park, the first disc golf course in Birmingham, winning his division and earning a handful of dollars for his trouble. During his 20-plus years competing at the professional level, Keith has seen prize money grow from just enough to cover travel expenses to some real big-boy dough, not to mention corporate sponsorships that now rival major mainstream sports.

“Back then I think I made a couple of hundred bucks. Not much,” Keith explained. “There are guys that make a living doing this now. That’s all they do; travel and play Disc Golf.” For instance, Paul McBeth, widely considered the best professional disc golfer on the PDGA tour has a 10-year $1 million per year contract with disc golf maker Discraft, once a sponsor of Keith’s, although his deal wasn’t nearly that lucrative.

Currently, Keith is sponsored by the Sweden-based company Westside Discs, one of the dozens of companies that have popped up to supply recreational and competitive disc golfers worldwide, especially over the last two-and-a-half years.

“When COVID hit and people couldn’t go to the gyms, they explored different avenues to get some exercise, and disc golf exploded. I mean, the disc companies cannot keep up,” said Keith. “It’s crazy how much growth has happened in the past couple of years.”

Keith’s full-time gig is with the Trussville Parks & Recreation Department, a bit of a departure after leaving the commercial printing business in 2010. Today, Kieth is perhaps now equally well-known for his course designs as for his abilities on the course.

He designed both of the courses in Trussville, the Civitan (John LeMaster) Course running through the woods and neighborhoods along Cherokee Road, and the Greg Carter Memorial Disc Golf Course on Riverbend Road. He also designed a course in Rainbow City, Alabama, and consulted on courses in Clay and Inverness.

Kieth said the Trussville courses stack up with many of the courses he has played throughout his career and are well-liked among the disc golf community.

“Terrain makes a huge difference because you want some good variation,” said Keith. You don’t want a course with just a big open field and no objects to throw around. You want a combination.

“People love them,” he added. “A lot of people tell me now they’re their favorite courses to play.”