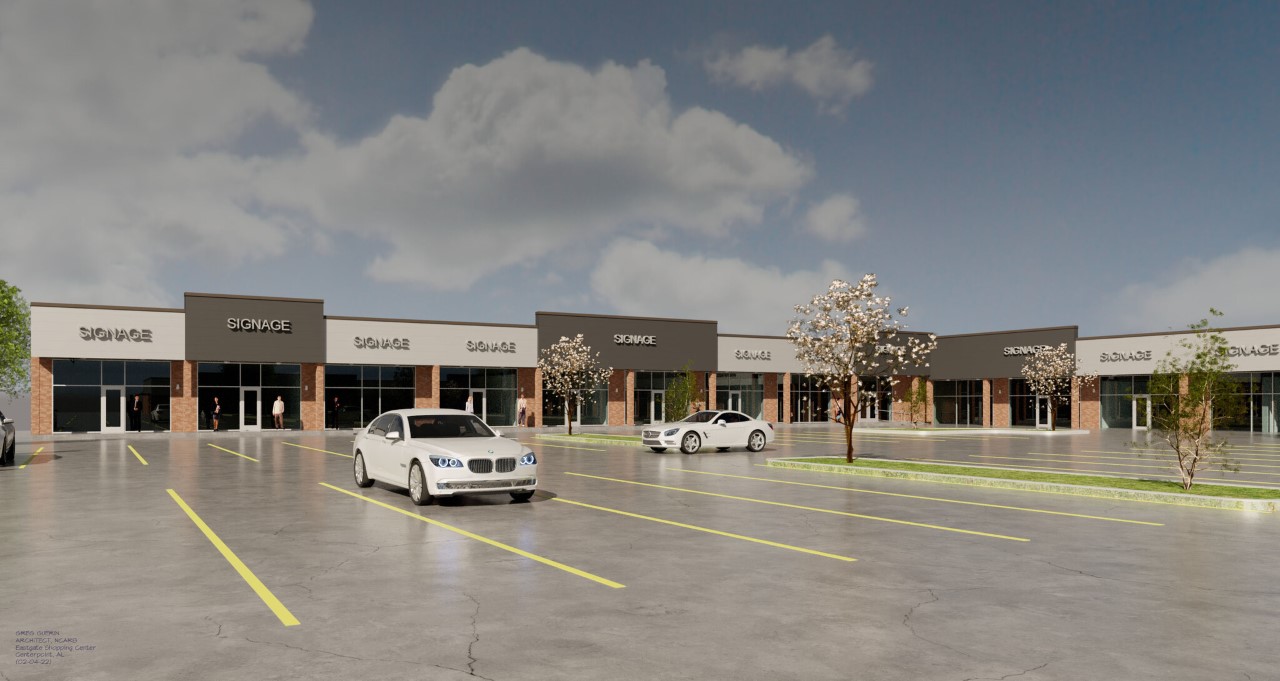 Eastgate Shopping Center redevelopment and a rendering of the newly renovated center courtesy of the developer, Merchant Investment Group.

Loyd McIntosh, For The Tribune

CENTER POINT — After years of neglect, the Eastgate Shopping Center, a historically significant retail outlet in the heart of Center Point, is undergoing a comprehensive redevelopment.

Eastgate Shopping Center redevelopment and a rendering of the newly renovated center courtesy of the developer, Merchant Investment Group.

Now under the ownership of Steve Merchant of Merchant Investment Group, the plans for the newly redeveloped shopping center include 19 spaces for rent, with at least one space anchored by a national chain. Currently, Merchant said two spaces have already been leased, while the remaining spaces will be leased once the project nears completion. At the time of this writing, Merchant anticipates the build-out to last four-to-six months.

Merchant also said he is working to recruit a diverse group of businesses and is making an effort to recruit businesses that do not compete with others within the shopping center.

“Right now, we have a nail salon and hair salon, and we are trying to get some national tenants and some restaurants and a mixture of everything. We are not going to overlap and have two or three barber shops, for instance,” Merchant said. “We are going to protect our tenants and not compete within our shopping center.”

The Eastgate Shopping Center was last renovated in 1983 and had fallen into disrepair by its previous owners, who, when pressed by the City Council to provide a plan to improve the shopping center, opted to unload the property instead.

“The bottom line on that property was the previous owners were out of Chicago and had been absentee and not putting anything into that property in a long time,” explains Buddy Aydelette, Economic Development Specialist for the City of Center Point. “Basically, the city just got a hold of them and asked them to give them a plan of what they planned to do with the property. I think that spurred them to say, ‘I think we’re just going to sell it,’ and so they decided to auction the property.”

City Council President and head of the Economic Development Committee said the redevelopment of the Eastgate Shopping Center is the shot in the arm the city has needed to spur a new era of development in the city.

“This is the start. I think that this is the foundational breakthrough that Center Point needed as far as economic development,” Collins said. “Seeing that a company has decided to start here is the opening of more to come in regards to development here.

“Being at beginning of the Parkway, something as big as that shopping center being fully occupied and full of businesses will just be phenomenal for our community. This is exactly what we need right now in Center Point.”

For Collins, the redevelopment of Eastgate is personal as well as professional. Having grown up in the area, Collins said her parents used to frequent the restaurants in and around the Eastgate Shopping Center, creating traditions that were an important part of her childhood. She said she believes the redevelopment of the Eastgate Shopping Center will return that sense of community and tradition for the residents of Center Point.

“We would go to CiCi’s Pizza, Seafood and Chicken Box, or Applebee’s every Friday growing up. Those are things that stick with a family, so to see that we could possibly have new businesses there where families can start those traditions with their family is just wonderful,” Collins said. “I’m excited to see that and to start something like that with my son.”

The first project in Center Point for Merchant Investment Group, Merchant said he intends to consider additional projects in the area if the Eastgate project proves to be successful.

“This is going to be my first project,” Merchant said. “If the city and the community allow me, hopefully, I will do more projects in Center Point.”

The Eastgate Shopping Center was opened in 1970 and encompassed just under 3.5 acres and is located on the northeast corner of Center Point Road and 16th Avenue.