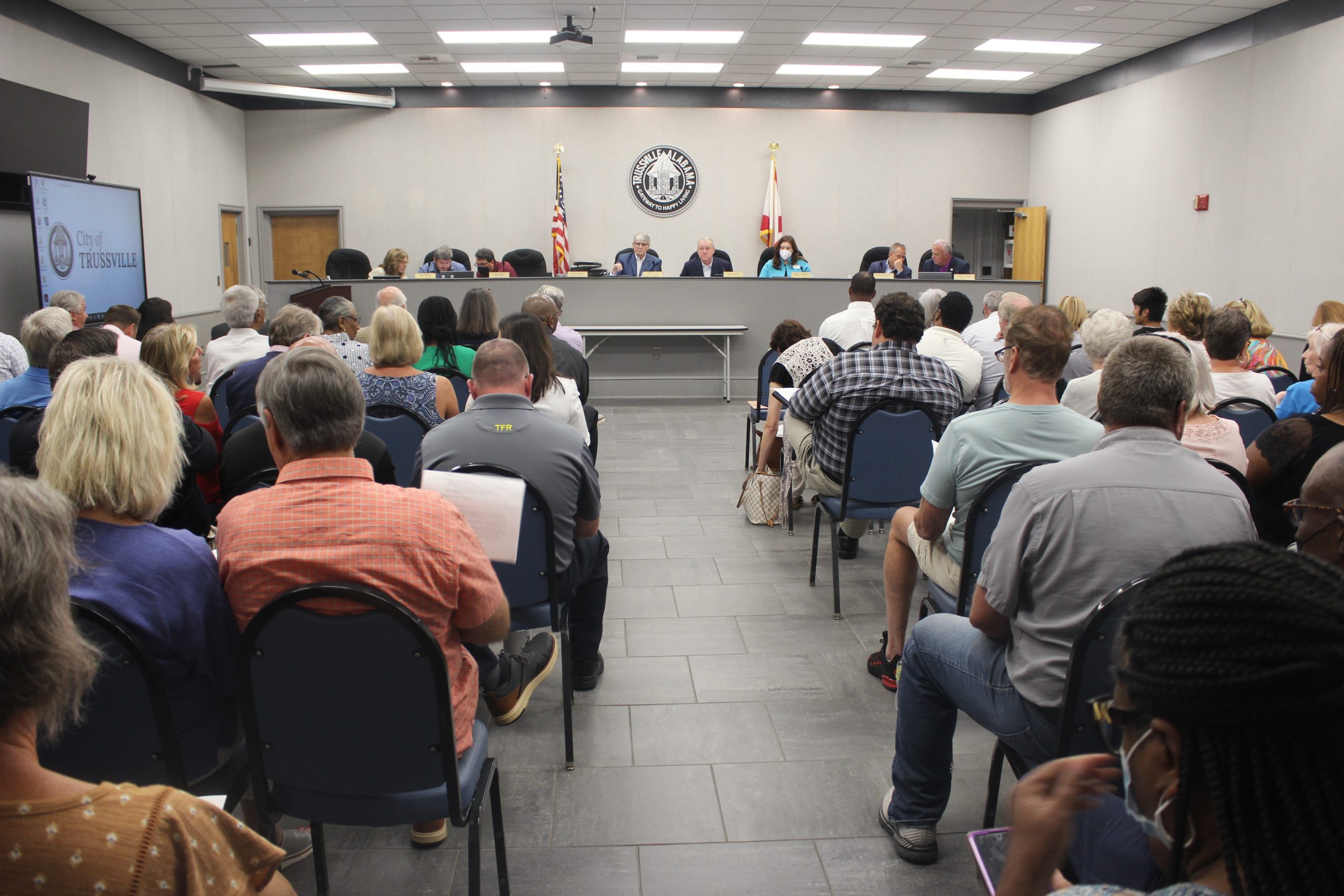 Trussville City Hall was packed with residents voicing their thoughts, encouraging the council to vote no to the Glendale Farms Preserve, and waiting for the highly anticipated vote. (Photo by Hannah Curran) 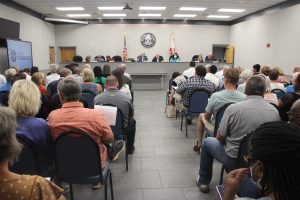 Trussville City Hall was packed with residents voicing their thoughts, encouraging the council to vote no to the Glendale Farms Preserve, and waiting for the highly anticipated vote. (Photo by Hannah Curran)

Redmont Consulting Group Managing Director Doug Neil, before the vote, said that the PUD design met the revisions and stipulations expressed by the council and community members.

The plan would have had 43 townhomes, 111 cottage units, and 24 brownstones, with the attached units representing the brownstones and townhomes, and all remaining units are individually detached units.

Once completed, the entire project, including single-family homes which would have primarily been built in the later stages, had a total density of 1.7 units per acre.

During public comments, Trussville resident Allison Gault said that the members of the community will remember the outcome of the council’s vote and will vote for those who vote for the community.

“I think what’s best for this city is to have continuity in our leadership so that we can have long-term plans that we can see through to the end,” Gault said. “That’s what I hope for the city… We’re skeptical. We just continue development with this mentality of ‘build it, and the infrastructure will come.'”

Another Trussville resident and President of Carrington Lakes Homeowners Association (HOA), Ron Hill, said that they admit this project has created a vast array of emotions on both sides of the proposal.

“To further exacerbate the flames, we have now included what is considered by the Board of Education to be quote, ‘The only option on the table,’ they have at present to alleviate overcrowding schools,” Hill said. “The developer has made some acceptable changes to the original plan. Some of those changes incorporate some of the recommendations we have put forward. However, the developer and builder are resisting our call to remove the higher density housing in the form of townhomes, brownstones, and cottages.”

Trussville City Hall was packed with residents voicing their thoughts, encouraging the council to vote no to the Glendale Farms Preserve, and waiting for the highly anticipated vote.

Councilmember Taylor said the property is going to be sold to someone, and the council’s responsibility is to decide the best use for that property.

“At the end of the day, it comes down to what is the best use for that,” Taylor said. “A lot of terms have been thrown out, like ‘high density.’ I think that’s misused in this because this is not high density compared to others. I think it’s fair if you want to say I don’t like townhomes. That’s fair to say but to say, I don’t want high density, almost every subdivision we have in Trussville is high density.”

Taylor added that based on where Trussville is, there are not a lot of places for the city to grow.

“I think a national trend is townhomes, and I think they’re being built all over the country,” Taylor said.

Councilmember Short said that there are a lot of good things about this project, but there are also genuine concerns.

“We all are up here because we care about our community, and we want to do what’s right for our community,” Short said. “That’s going to guide whatever decisions I make, I won’t speak for everybody else. That’s what guides me, ultimately, I appreciate everyone in this room for being here.”

In other news, the council approved:

The next Trussville City Council meeting will be on Tuesday, August 23, beginning at 6 p.m.