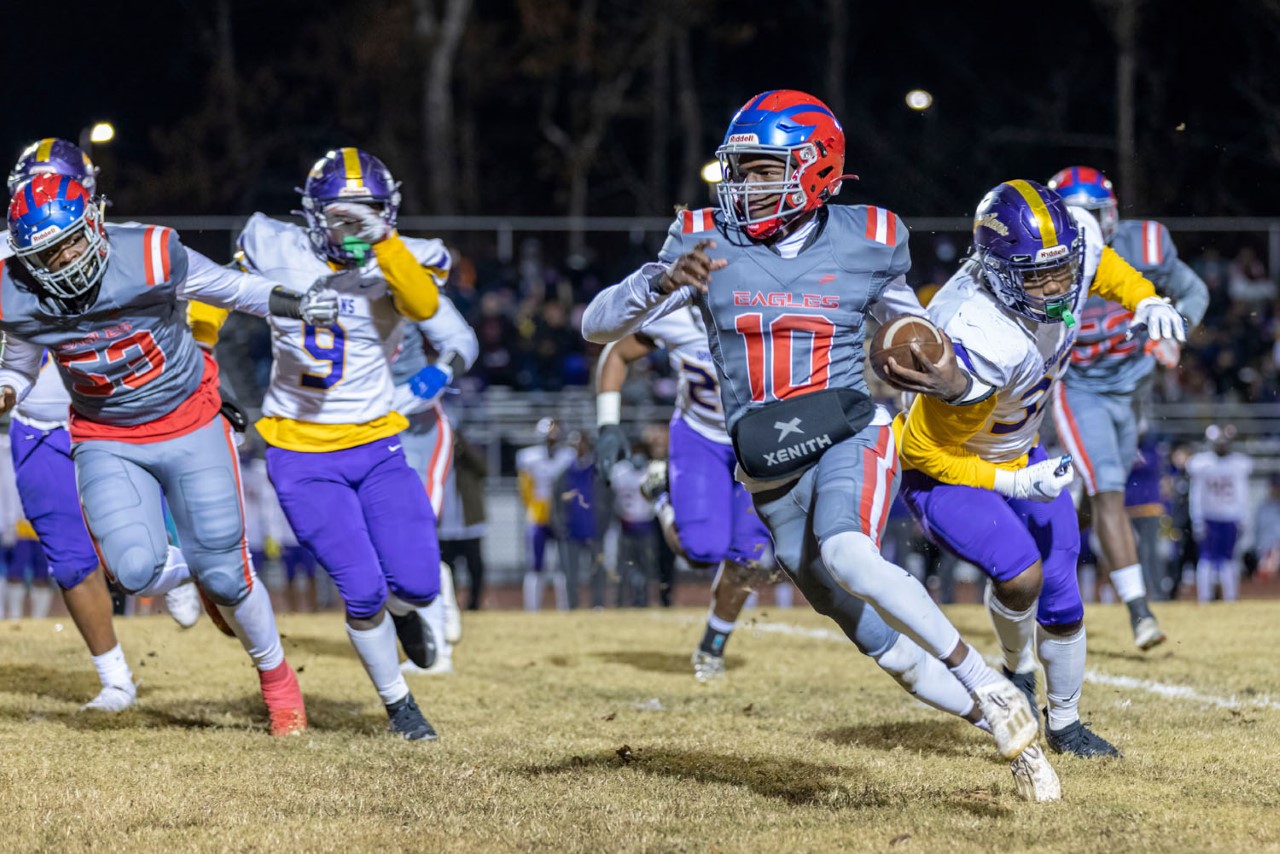 CENTER POINT — Jabari Collier kept the Center Point Eagles within striking distance of Pleasant Grove during the quarterfinals of the 2021 5A playoffs. 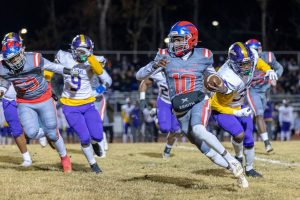 With Pleasant Grove keyed on Troy Bruce and limiting the standout running back to only 54 yards, Collier scored two running touchdowns and threw another as the Eagles kept the Spartans on their toes deep into the third quarter of Friday night’s quarterfinal 5A playoff game.

Collier got the scoring started with 8:40 left in the first quarter, when he ran the ball in from one yard out. The Eagles re-took the lead when he ran 24 yards to pay dirt on their next possession. Overall, Collier ran for 195 yards and passed for 59 more on 7-for-14 attempts.

He hit Therman Moore for a 15-yard score to bring the Eagles within a touchdown on the first drive of the second half, but Center Point could get no further.

This is the second time this season Collier has been named The Tribune’s Player of the Week.

After the loss to Pleasant Grove, Collier was stoic on the sidelines. The end of the season hurt, as the Eagles felt they had more they could have accomplished. But this was a team that went 9-4 and made it into the quarterfinals of the 5A playoffs, proving that Center Point has made major strides as a program.

Collier was in his first full season as quarterback, and according to his coaches, he made tremendous progress at the position. He enters his senior season in brand-new territory, as the Eagles fly into the 6A classification, and into Region 6, where the last five 6A state champions have been crowned.

Of course, the Eagles also have the joker in the deck: Bruce at running back is a game-changer who provides another dose of real speed — and an added element of shiftiness in the backfield.

How good is Bruce? In the 2021 playoffs, Bruce ran wild in the first round, a road game against East Limestone. He posted 368 rushing yards and six rushing touchdowns in a 66-36 win.

Center Point opened the scoring with a 36-yard touchdown pass from Collier to Harold Holloman with 9:42 to play in the first quarter.

East Limestone tied the game at 7-7 on a 40-yard pass from Gage Hill to Barrett Brown with 6:09 remaining in the first and then Bruce took over.

Bruce scored five of Center Point’s six rushing touchdowns in the first half, scoring from 60, 18, 24, 1 and 66 yards. Collier added a 24-yard touchdown run in the second quarter as Center Point built a 45-7 halftime lead.

Bruce’s sixth rushing touchdown, a 42-yarder, came with 8:27 left to play in the third.

All told, Bruce ran 19 times for 368 yards and six scores. When the Eagles’ offense is working, Center Point can pile up the yards and the points against East Limestone, Center Point finished with 580 yards of total offense.

The Eagles proved themselves in 5A in 2021. Now the 2022 campaign in a new, tougher class and region, begins.