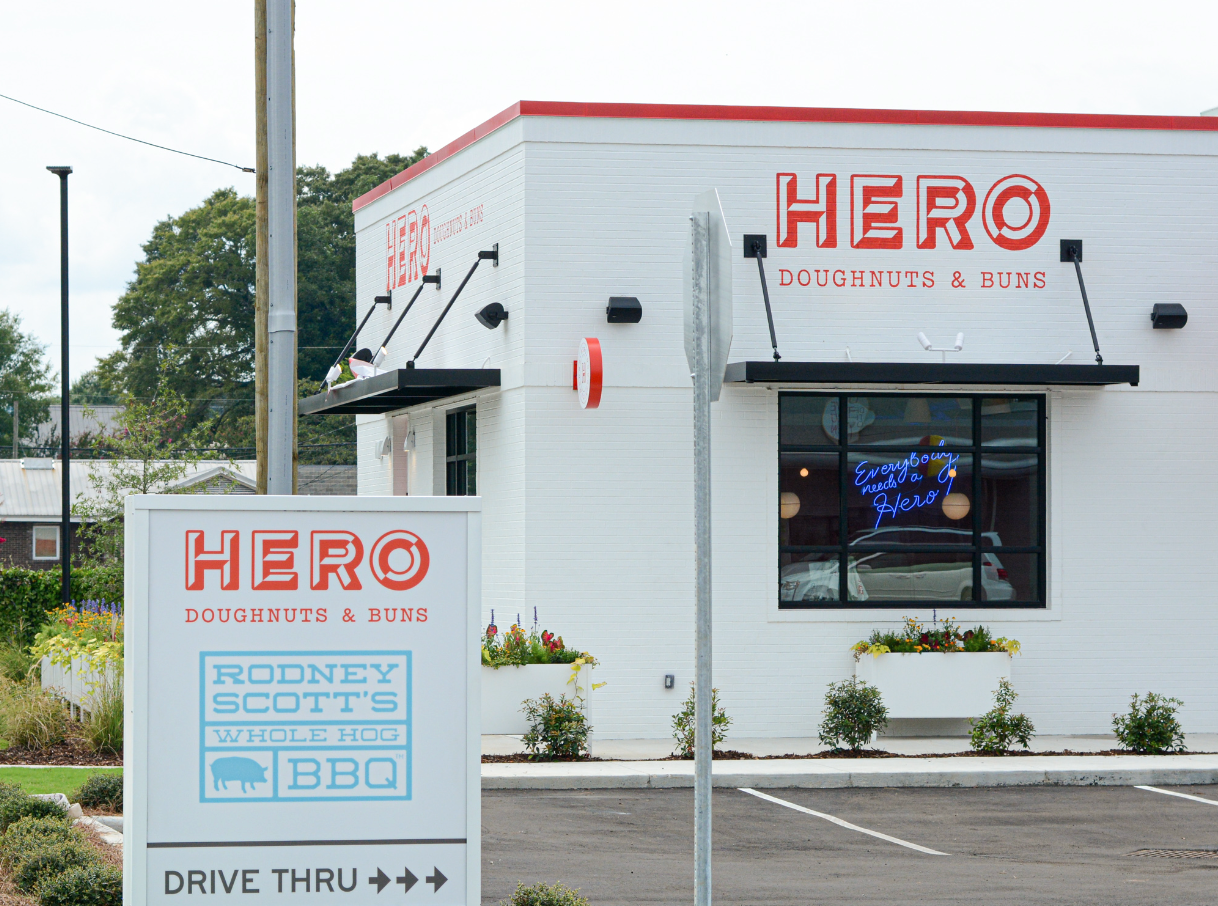 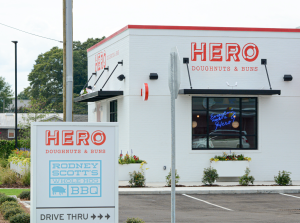 It all started with great dough—brioche style—in a two-day process. Doughnuts and buns handmade with that dough paved the way for award-winning burgers, full breakfast plates and sandwiches, fresh salads, and “brunchy-cocktails.” A happy place for everyone.

“Heroes wake up daily to lead by example,” Local Sales Manager, Maggie Wiginton, said. “The simplicity of great food made with good ingredients in a bright atmosphere provides a jumping-off point for heroic efforts inside and outside the restaurant. Customers look through our windows to see doughnuts and buns being mixed, rolled out, and cut by hand.”

The kitchen is a fast-paced, short-order style workshop where quality ingredients are prepped, cooked, and assembled to the standards established by Chef and Founder Wil Drake and their culinary team. Heroes’ dining rooms and pick-up windows are cheerful outlets where the community gathers, kids play, friends and colleagues meet, and Heroes can emerge every day.

The first location of Hero Doughnuts and Buns opened in 2017 on a beloved corner of Homewood. The restaurant quickly became a local favorite and the menu expanded to include locally roasted coffee, breakfast buns filled with eggs, meats, and cheese, and “lunch buns” stuffed with the now-famous Super Crunch Chicken and griddled burgers.

Drake is the creative mind behind Hero Doughnuts and Buns—a Birmingham boy with a desire to do good work and make life joyful. Drake’s culinary journey includes a degree in nutrition, working as a baker, hustling in a busy BBQ restaurant, flipping burgers, studying whole-animal butchery, and preparing nutritious meals for those suffering from eating disorders.

Drake returned to baking with an earnest effort of not compromising quality and a commitment to hard work that has elevated Hero Doughnuts and Buns to its cherished place in the Birmingham community and beyond.

A robust team of partners that includes founder Drake, Nick Pihakis and Pihakis Restaurant Management Group, Capstone Development CEO Mike Mouron, and Chief Operating Officer Jeremy Chambers at the helm is key to the success of the brand.

What started with a successful small operation in its Homewood store has evolved into a family of Heroes. Standards of operation, culture, hospitality, and the quality and execution of Hero’s incredible menu are managed in each store, with each member of the team playing a vital role. The result is a series of restaurants that offer a well-rounded, casual menu with choices that appeal to a wide audience and a chance to gather with friends, family, and the community whether the guest is a visitor to the area or one of Heroes many frequent, return customers.