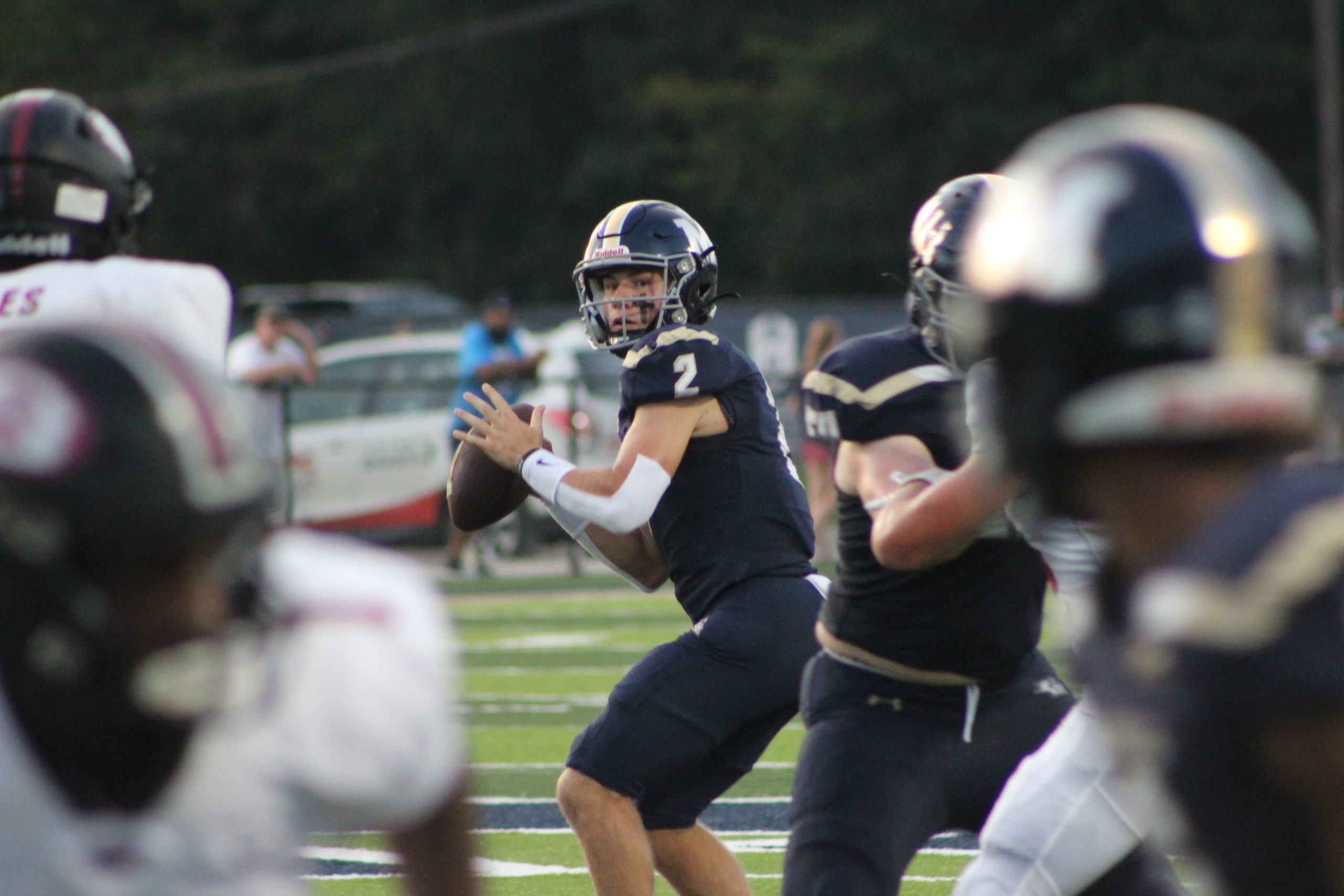 Moody's Cole McCarty threw four touchdowns and ran for one more as Moody swept past Sylacauga. (Photo by Hannah Caver-Curran)

MOODY — The Jake Ganus era continued its winning ways Friday night as the Moody Blue Devils sent the Sylacauga Aggies back down U.S. 280 with a 58-24 loss. 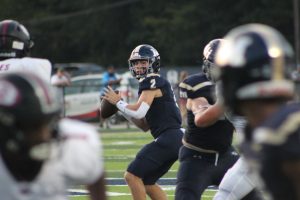 Moody’s Cole McCarty threw four touchdowns and ran for one more as Moody swept past Sylacauga. (Photo by Hannah Caver-Curran)

But the night was about much more than that. It was Ganus’ first home game at Moody as well as the first game with the new turf field, and the community was out in full force.

“The stadium was full at 6:15,” Ganus said. “It’s unbelievable. I couldn’t be prouder to be part of this community and to be the coach here. Our people are amazing. We’ll need them again next Friday.”

On to the football game.The fireworks started with less than 2 minutes off of the clock as Blaine Burke wrote his name in the Moody history books with the first touchdown, a 4-yard scamper, on the new turf at the 10:19 mark.

“I thought about that before the game.I was like, ‘I wonder who’s going to score the first touchdown.’ I’m just thankful it was me,” said Burke, who ended the night with 13 carries for 147 yards, two touchdowns and two 2-point conversions.“My coaches are responsible for how well I did tonight and my o-line blocked their tails off.My quarterback put me in great positions.Without them, I wouldn’t be anything.”

After the first touchdown for Moody, Sylacauga struck back and tied the game on a Connor Twymon run from 2 yards out. Moody’s next drive stalled out and they gave the ball back to the Aggies. Despite untimely penalties, Moody was able to get the ball back to open the second quarter.

Burke score his second touchdown of the night on a 55-yard burst at the 11:16 mark of the second quarter. The defense held and got the ball back into the hands of the Blue Devil offense, but Cole McCarty would throw a pick-six to Sylacauga’s Quandavius Swain to tie the game at 14.

Now that McCarty had that out of his system, he would hit Davion Dozier for a 53-yard strike that saw the wide receiver make a spectacular catch for the score.Sylacauga took more than 5 minutes off of the clock before adding a field goal to make it 21-17 with just 18 seconds left in the half.Moody returned the kickoff deep inside Aggie territory, but a penalty would back them up to their own 30.

Instead of taking a knee, McCarty found Dozier again for a 70-yard touchdown to end the half. McCarty went 9-for-16 for 229 yards, with four passing TDs and one score on the ground.

“To me, that changed the game,” Ganus said of the play. “It was just a regular day.  We just took what they were giving us,” said Arkansas commit Dozier of his performance (four catches for 177 yards and three touchdowns).

The train would keep rolling, as McCarty would get a touchdown on the ground from 1 yard out and then find Dozier again for a 9-yard touchdown pass, followed by a 23-yard touchdown pass to Kolby Seymour.Before Sylacauga knew it, Moody was up 51-17 and clicking on all cylinders.

“We just made some adjustments (at halftime),” Ganus said. “Give credit to Coach Jones and the defensive staff.  The kids just have to settle down early on.”

Sylacauga would score another touchdown with 9:04 to go in the game, but Moody would get the backups involved as Abram Jackson broke numerous tackles en route to a 67-yard touchdown to seal the deal at 58-24.

“We grew up tonight,” Ganus said. “We got over the mistakes that would have made us hang our heads.”