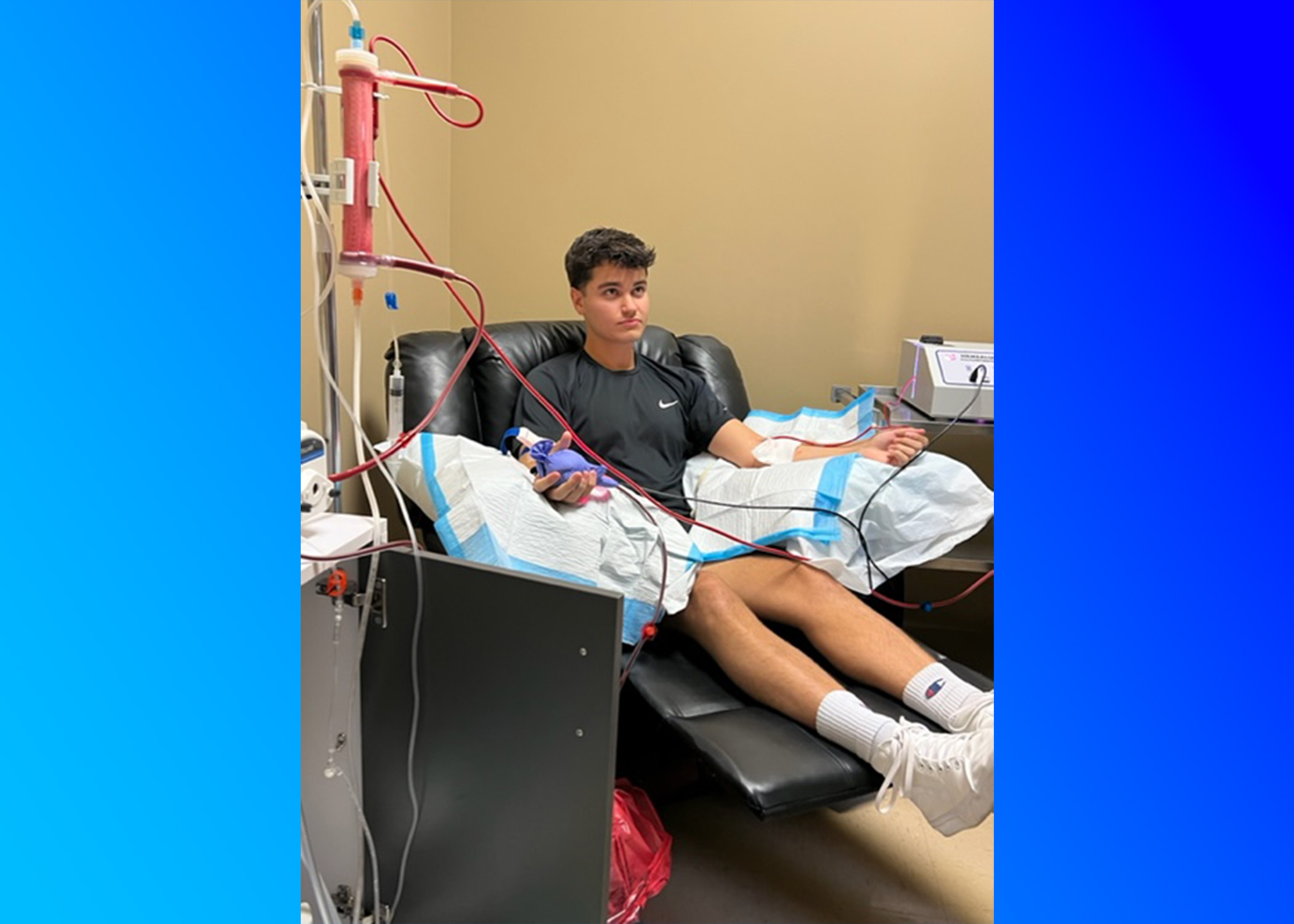 Landen getting EBO2 at Sparrow Health and Performance. (Photo courtesy of Jill Williams)

TRUSSVILLE — A high schooler’s senior year is supposed to be filled with excitement and anticipation for the ending of one chapter and the beginning of another. However, for 19-year-old Landen Williams, the last 15 months have been anything but exciting. 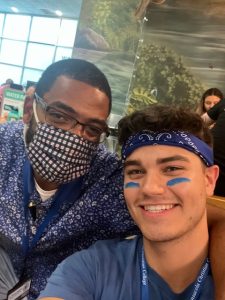 Landen was diagnosed with COVID in April 2021, and his mom Jill explained that it appeared to be a mild case.

“It was very mild, and we didn’t think anything about it,” Jill said. “He was over it in a few days and was going on with his life. He was actually a health coach at the YMCA.”

Two months later, just like every year, Landen attended a youth camp at Pensacola Christian College, but this year would be unlike any other.

“After the night service, I was in my dorm,” Landen said. “We were just having fellowship talking and everything, and then all of a sudden, my resting heart rate went up to 160, and my blood pressure was 160 over 120.”

Landen was immediately taken to the emergency room, but doctors couldn’t find a diagnosis. So when his parents arrived a couple of hours later, they took him home to Alabama, and he was taken to a physician in Birmingham, but those doctors were also stumped.

“He was having stabbing chest pains, shortness of breath,” Jill said. “It was just very odd because he was very healthy and had no underlying conditions. Landen was my healthy child. He never was sick. He maybe had the flu once, and that was it. No colds, no sinus infections, nothing.”

Jill explained that she took her son to every hospital, doctor, and specialist she could think of.

“We brought him back home and started scheduling a series of doctor’s appointments, where they poked, prodded, and ran tests, you name it, we had it done,” Jill said. “We’re trying to figure out what was going on; we thought it was his heart; we just didn’t know.” 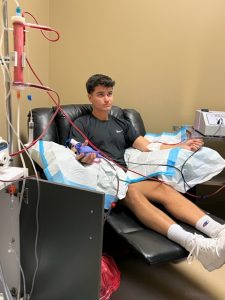 Landen getting EBO2 at Sparrow Health and Performance. (Photo courtesy of Jill Williams)

As an extremely active teenager, Landen knew something was wrong, but nobody could give him an answer.

“Over the last year, we’ve been to so many doctors,” Landen said. “Paramedics would come to the house because I wake up in the middle of the night with my blood pressure extremely high, like 160 over 120, with a 135 heart rate in the middle of my sleep. So I just knew something wasn’t right.”

Then Jill takes Landen to Dr. Payson Daugherty in Chelsea, and after a deep dive into research, Dr. Daugherty diagnosed Landen with Long-COVID. This type of COVID is when a person has not fully recovered from COVID-19 weeks or even months after first experiencing symptoms.

Jill said that there are over 200 symptoms that can be associated with Long-COVID.

“A lot of long haulers, in three months, six months, eight months, their body resets, and they get better,” Jill said. “We hoped that would happen with Landen, but it didn’t.”

During Landen’s senior year, a doctor from Hungry flew to Atlanta, Georgia, to run some tests on him. Landen was given a device, “a special oximeter that measures a whole host of things in his heart,” and he was put on some medication.

“We’ve been using the device since April to send measurements to Dr. Kulin, and while it was working, the medication wasn’t,” Jill said. “In fact, we got a call from Hungary, two international calls from Dr. Shandor Kulin in Hungary, and he said Landen’s numbers are not improving.”

In May 2022, Landen graduated from Mountain View Baptist School as valedictorian, but his dreams of attending college have been put on hold. Instead, he now juggles a host of symptoms and struggles to breathe while completing simple daily tasks, such as walking to the mailbox. 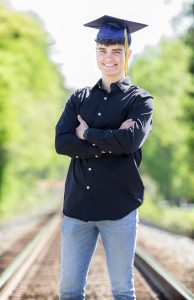 “He was valedictorian,” Jill said. “He was going to attend Pensacola Christian College; he had a scholarship there.”

Jill became a “momma on a mission” she began researching everything she could on Long-COVID. Her persistence began to pay off when she discovered an article written about Dr. Beate Jaeger, a medical doctor who pioneered the use of apheresis in treating individuals with Long-COVID.

The article explains that microscopic blood clots were discovered in patients with Long-COVID, and Jill realized this could be the cause of her son’s problems.

However, Jill said no tests in the United States could accurately diagnose Landen with microscopic blood clots. So finally, having found a sliver of hope, Landen was put on a waiting list for treatment in Europe.

“We got on the list, and they said, ‘It’s gonna be six months to a year,'” Jill said. “I kept thinking, ‘Well, surely, in a year, he will be better.’ I just had no idea that he would still be sick and getting worse.”

They received an email that Landen had been assigned to Larnaca, Cyprus. Jill explained that Larnaca, Cyprus is one of the largest islands in the Mediterranean Sea and is the “only totally dedicated COVID clinic in the world.” Landen is supposed to leave on September 30, but his insurance doesn’t cover out-of-country medical treatment.

Fearful that she would not be able to give her son the medical attention that he needed, Jill began searching to find somewhere in the United States that could help. Finally, Jill found the Sparrow Health and Performance on Highway 280, and they did an Extracorporeal Blood Oxygenation and Ozonation (EBO2) on Landen.

“They took his blood and filtered and oxygenated his blood, trying to relieve it,” Jill said. “The problem is that Landen’s lungs are taking in the oxygen; the microscopic blood clots are starving his cells of oxygen. The oxygen cannot get through to the organs. So that’s why he’s having all these pain stabbing chest pains, back, stomach, his liver, his kidneys, they’re fighting for the oxygen, and he’s in oxygen deprivation.” 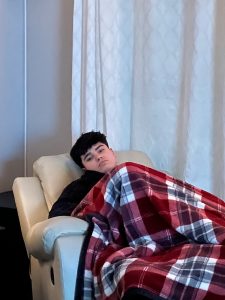 During the treatment, the doctors were shocked to see a macro blood clot filter through the system, and that is when Landen was introduced to “long-haul specialist” Dr. Jordan Vaughn in the Birmingham area.

Landen was then diagnosed with macro and micro blood clots throughout his body by Dr. Vaughn. Landen was put on a triple anticoagulant, but the medication has put a toll on Landen; it’s hard for him to walk across the room.

“The doctor said the first three to four weeks are going to be the worst,” Jill said. “He wants us on them for one to three months. We go back every two weeks to see where Landen’s at.”

After many hours spent praying, Jill said she received the verification from God that going to Larnaca, Cyprus, for the 6-week treatment is the best course of action to help Landen heal.

A GiveSendGo campaign called “Moving Mountains for Landen’s Medical Journey” was set up to help pay for the medical expenses. The campaign has already raised $8,335 of the $35,000 goal.

Throughout Landen’s journey, he hasn’t lost hope, and he continues to spread hope to everyone experiencing the same problems as him.