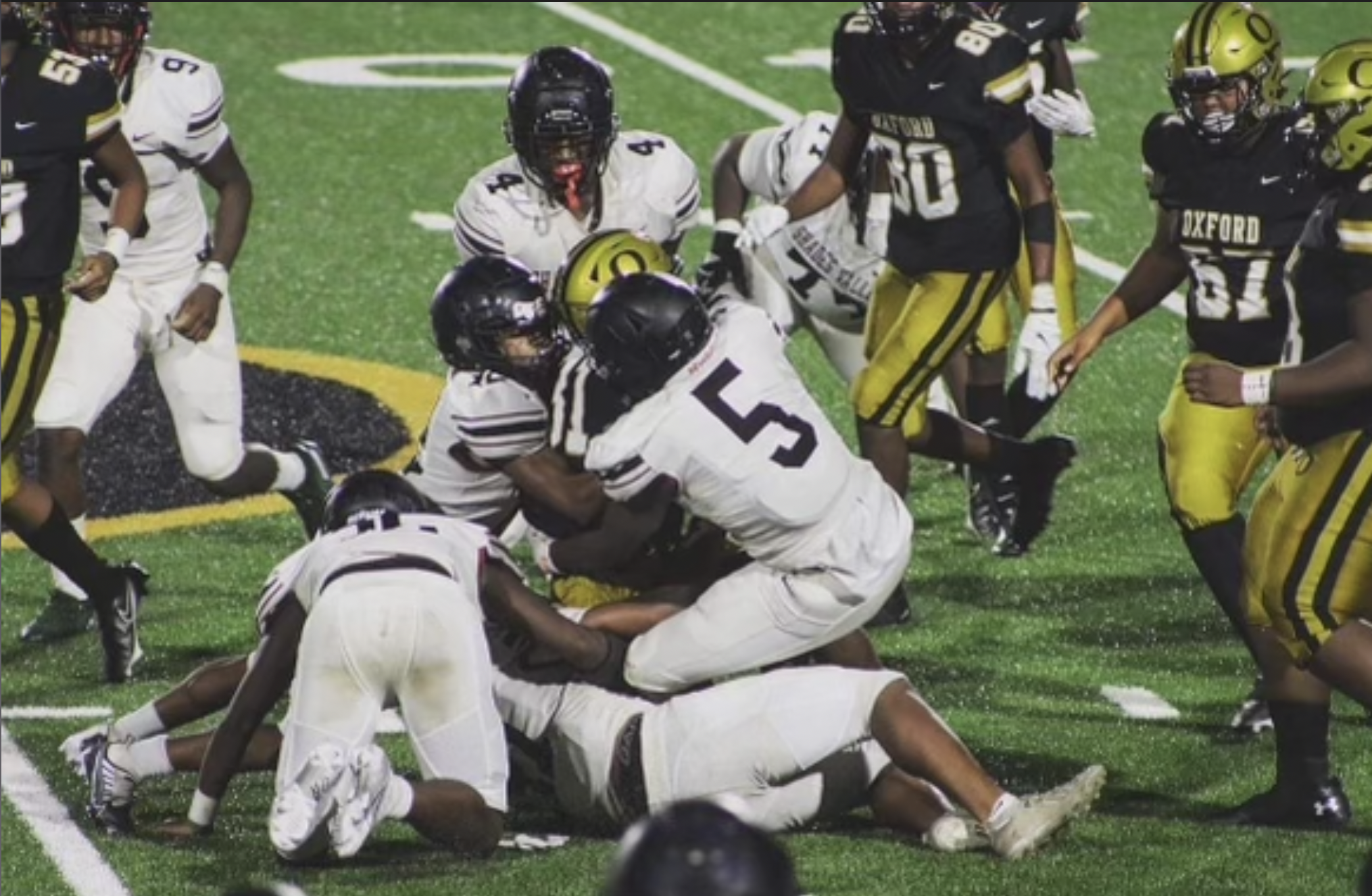 Shades Valley had an early lead on Region 6 rival Oxford, but couldn't stop the Yellow Jackets in the second half. (Photo by Kawanna Brickler)

OXFORD — The Shades Valley Mounties lost to the Oxford Yellow Jackets on the road 45-13 in Region 6 play. 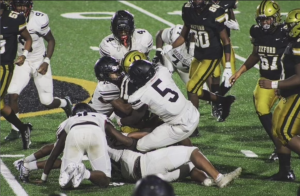 Shades Valley had an early lead on Region 6 rival Oxford, but couldn’t stop the Yellow Jackets in the second half. (Photo by Kawanna Brickler)

The Mounties came away with no points on three drives inside the Oxford Red Zone as mistakes plagued Valley all night. Oxford returned a Mountie fumble for a touchdown, the special teams fumbled a punt return, the offense threw an interception and committed a costly intentional grounding penalty while in scoring position, and the defense gave up big plays due to missed assignments.

The visiting Mounties got off to a strong start offensively despite starting two freshman linemen in place of two injured starters. Valley was able to open a 13-0 lead on two Steve Brown passes to Christian Thomas for scores of 37 and 32 yards in the first quarter.

The Yellow Jackets answered with a 33-yard touchdown from Mason Mims to Judd Syer with 3:47 remaining in the first quarter to cut the lead to 13-7.

After Erin Callens returned the kickoff 50 yards, the Mounties drove to the Oxford 14-yard line, but a penalty and sack ended the drive.

Oxford quickly moved the ball inside the Mountie ten-yard line, but the Valley defense stiffened and forced Oxford to settle for a field goal. Shades Valley led 13-10 with 9:33 remaining in the half.

The Mounties were forced to punt on their next possession. After a short punt, Oxford started on their 42-yard line. On first down, the Yellow Jackets scored on a 58-yard touchdown run up the middle. The Mounties trailed 17-13 with 7:03 remaining in the half.

Disaster then struck for the Mounties on their next possession. After moving the ball to midfield, Oxford freshman defensive end Keenan Britt stripped quarterback Steve Brown of the ball and returned it 32 yards for an Oxford touchdown. The Yellow Jackets held a 24-13 lead with 4:31 remaining in the half.

The Mountie offense was able to regroup quickly. Due to a penalty, a 50-yard Christian Thomas touchdown was taken off the board. The drive ultimately reached the Oxford 19-yard line, but an intentional grounding call moved the ball back to the 34-yard line, and the drive stalled. The Mounties headed to the locker room trailing 24-13.

The Yellow Jackets opened the second half with a bang. Quarterback Mason Mims hit Judd Syer with a 60-yard strike to take a 31-13 lead with 10:06 in the third quarter.

The Mounties then moved the ball to the Oxford 35-yard line, but the drive stalled again, and the Yellow Jackets took over with 8:33 remaining in the 3rd quarter.

The Jacket offense then went on an impressive six-play 65-yard drive and took a 38-13 lead after a 21-yard Mason Mims toss to Damious Wilson with 5:45 remaining in the 3rd quarter.

On the next Shades Valley possession, Brown threw an interception, and Oxford took over with 3:45 remaining in the period.

The Mountie defense forced a punt and drove the ball to the Oxford 12-yard line but again failed to come up with any points.

Oxford then marched 88 yards and sophomore Jamari Winn scored on a one-yard run to extend the Yellow Jacket lead to 45-13.

The two teams exchanged punts on their next two series with the Mounties fumbling the punt return at their 28-yard line with 5:42 remaining. The Yellow Jackets moved to the Valley 8-yard line but handed the ball back to Valley on downs with 2:50 remaining.

Shades Valley was forced to punt and Oxford ran out the final 55 seconds of the contest.

Senior Christian Thomas had nine receptions for 154 yards and two touchdowns in the losing effort.

“We are learning how to finish games,” said head coach Rueben Nelson. “Football is an emotional game, and you have to play a complete game when you go up two scores, not five just minutes.”

Shades Valley has a bye week and will host Huffman at home on September 16 in another Region 6 game.

“We are disappointed, but we will regroup and correct mistakes and get ready for the next one,” Nelson said.