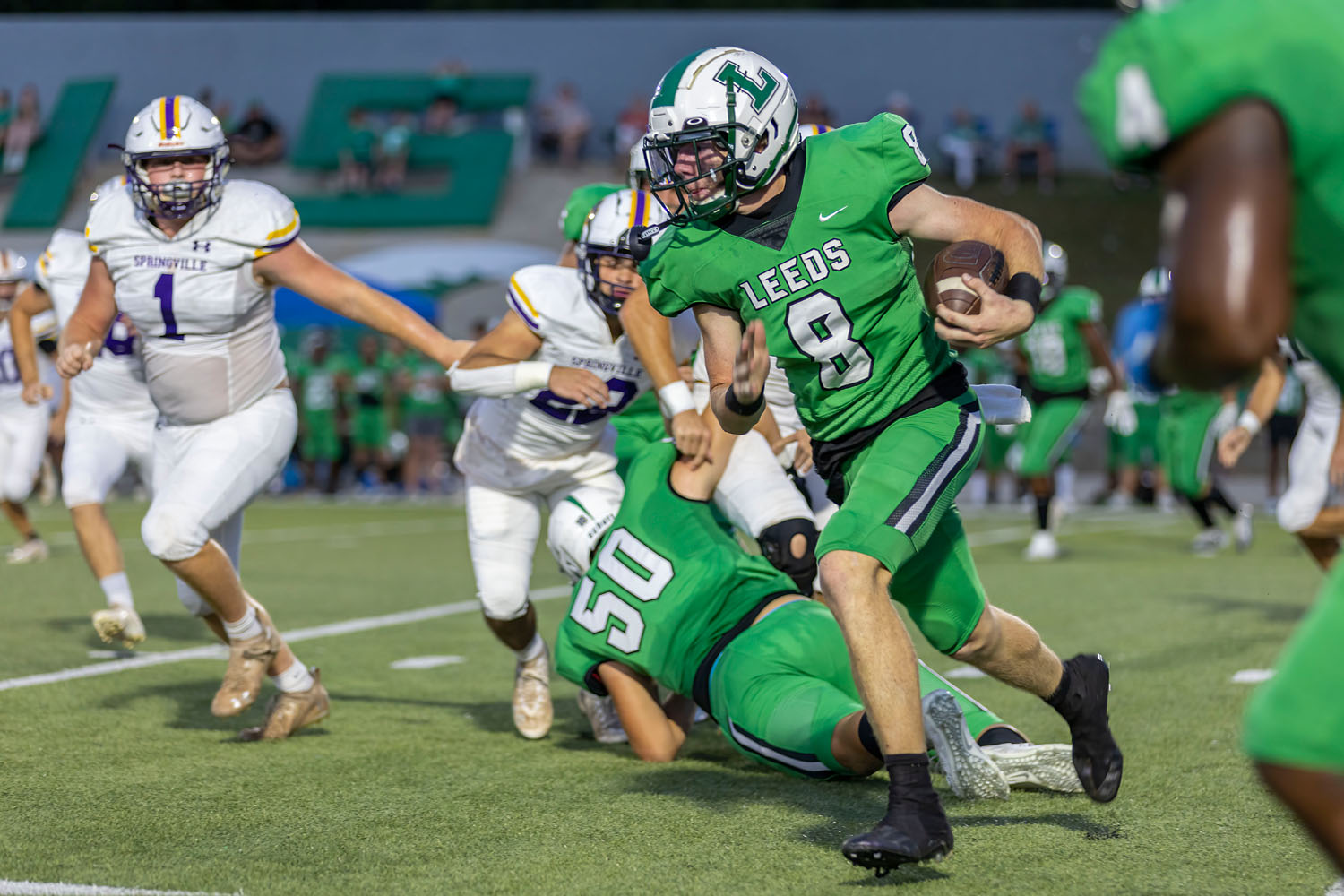 ODENVILLE – Third-ranked Leeds scored a touchdown in every phase of the game Thursday night in a 52-13 victory over 5A Region 6 foe St. Clair County. 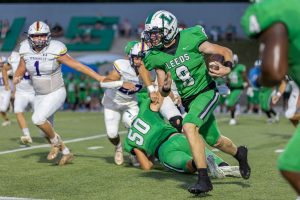 Leeds will travel to Sylacauga in two weeks.(Photo by Ron Burkett)

The Green Wave (4-0, 2-0) got 3 touchdowns on the ground from senior Jeremiah Hunter as part of a 187-yard rushing night. They added a touchdown from the defense and two scores from the special teams units.

All that was in the first half. At intermission, Leeds led 45-0.

“Really, what you’re playing against is your own standard,” Leeds head coach Jerry Hood said. “What is your standard? Can you exceed that this week? That’s really all that matters.”

It was a dominant performance from the opening whistle. St. Clair County (0-3, 0-1) did not earn a first down until nearly halftime and finished with 107 total yards of offense.

Leeds scored on their first play from scrimmage, a 47-yard run by Hunter for his first touchdown.

“Coach always teaches us, just run hard every time we get the ball,” Hunter said. “Look for our keys and our gaps, and we just hit it.”

To open the second quarter, Leeds punt returner CJ Douglas hauled in a Saints punt at his own 17, then knifed through the coverage for an 83-yard score.

“The most impressive thing about CJ, he ran the touchdown back, a long punt return, then he goes down and makes the tackle on the next kickoff,” Hood said.

Hunter added touchdowns of 45 and 20 yards, sandwiched around a 7-yard score by Grayson Ford and a 37-yard field goal from Jackson Arthur.

“We knew [Leeds] is a good football team,” St. Clair County head coach PJ Wright said. “We knew it going in. Early we had a couple breaks go against you, and it was tough on us. But we actually bounced back pretty well, played hard.”

Wright’s Saints got a touchdown pass from backup quarterback Timothy Jones, who tossed a 19-yard score to Jaylen Cody on the final play of the first half. The Saints also got a fourth-quarter touchdown from CJ Martin in the fourth quarter on a 50-yard run.

The Green Wave now heads into a bye week a day early since the game was rescheduled to Thursday to avoid the threat of severe weather.

“I think they have played together as a team, about as well as any team I’ve had,” Hood said. “They’re hungry. They understand that, even though we’ve had success the last few years, we’re still on a big climb in our region. The meat of our schedule, the hardest part of our schedule’s coming up.”

Leeds will travel to Sylacauga in two weeks. St. Clair County will travel next week to face Southside in Gadsden.