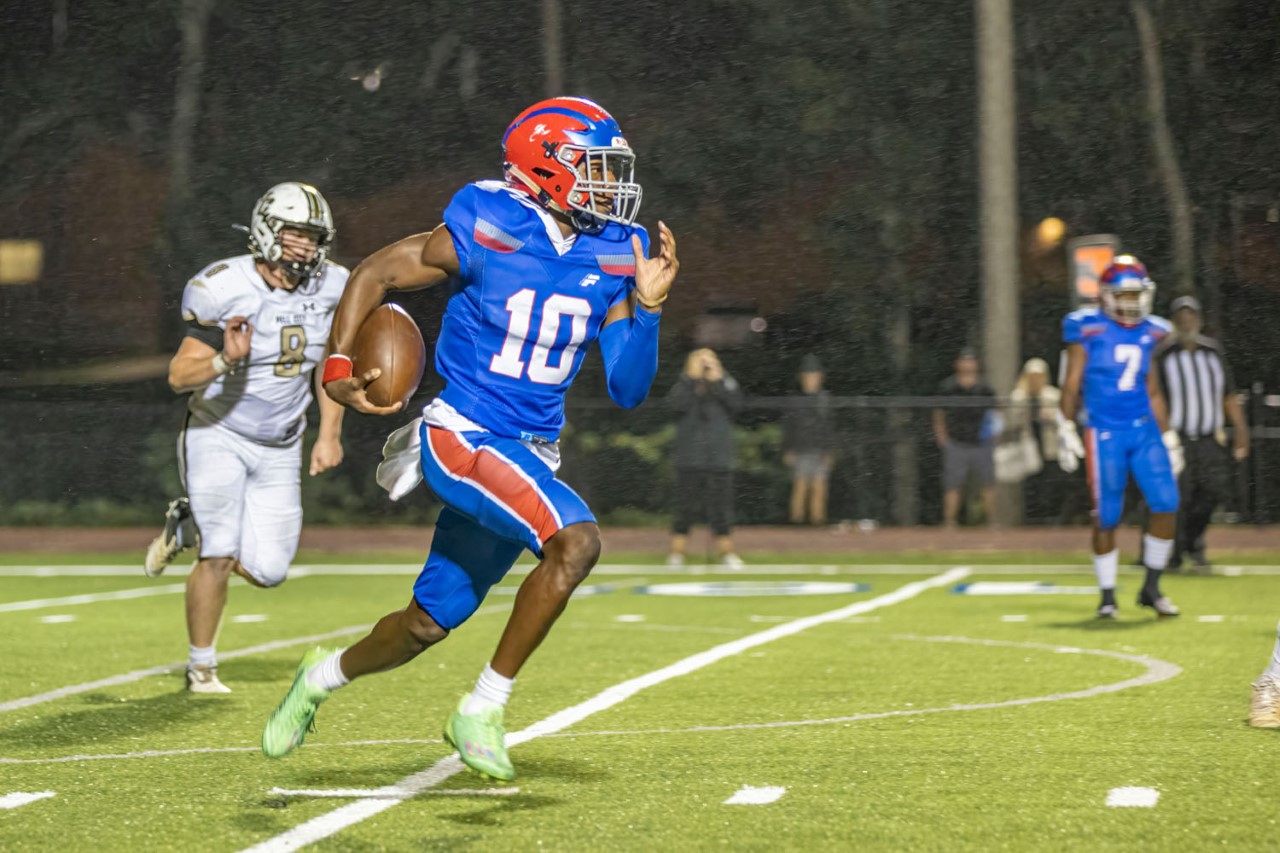 Jabari Collier was impressive with his arm and his feet, on the new turf field. (Photo by Ron Burkett)

By Loyd McIntosh, For the Tribune

CENTER POINT — The Center Point Eagles christened their new turf en route with a smack down over the Pell City Panthers, 56-10, Friday night, improving their record to 4-0, 2-0 in Region 6 action. 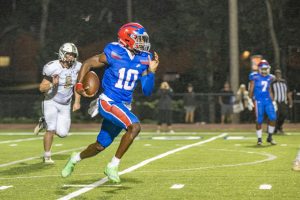 Jabari Collier was impressive with his arm and his feet, on the new turf field. (Photo by Ron Burkett)

Fresh off a 32-6 victory over Huffman on Thursday, September 1, the Eagles played their first true home game at the Eagles Nest, getting their first chance to play on the new artificial turf completed just in time for the Pell City game. Once the backs and receivers found their footing on the new surface, Center Point scored on big plays by the offense, defense, and special teams throughout the contest.

Following an impressive stand by the Center Point defense, quarterback Jabari Collier found running back Troy Bruce open on a screen pass, breaking several tackles on his way to a 70-yard touchdown on the first play of the second quarter, putting Center Point up 14-3.

Collier was impressive with his arm and his feet. Midway through the second quarter, Collier found Harold Holloman open on a third-down and long, that went for 34 yards before Holloman was dragged down at the one-yard-line by Pell City. Collier punched it on the next play extending the lead to 21-3. He scored once more with just 1:10 left in the second quarter as Center Point went into halftime with a commanding 28-3 lead.

The second half saw Bruce take charge. Bruce scored on an 11-yard run on the Eagles’ first possession of the third quarter and gathered a four-yard pass as Collier rolled to his right for another touchdown with 6:08 left in the third quarter.

Center Point scored its third touchdown of the third quarter less than a minute later as the defense got into the act on a pick-six by Deon Moore with 5:17 left in the third quarter, putting the Eagles up 49-3.

Pell City managed to put together a drive, punching in a five-yard touchdown early in the third quarter. On the ensuing kickoff, however, Center Point’s offensive star of the game, Troy Bruce, collected the directional kickoff at the 30-yard line near the far sideline. Bruce, breaking multiple tackles, found a seam, crossed the field, and scampered 65-yards down the near sideline before being dragged down at the five-yard line. Julius Finnerson crossed the goal line on a one-yard run moments later to put Center Point up 56-10.

Just five more yards on the return would have given Bruce at least one touchdown rushing, receiving, and on special teams for the 5 foot, eight-inch senior. On the night, Bruce gained 123 yards on nine rushes, caught four passes for 110 yards, and gained over 100 all-purpose yards, most of them coming on the 65-yard kickoff return.

“I just trusted my team. I followed the blocks, and I executed the game plan,” Bruce said. “I was seeing lanes, and I was taking them. If the O-line made the lanes, I ran through them. They make me look good, and I make them look good.”

“He’s special. I tell everybody he’s the best pound-for-pound back in the state,” said Center Point Head Coach George Bates. “The only thing is I’m ticked off at him because he’s got to finish off that kickoff return.”

Center Pont finished the game with 230 yards passing and 174 yards rushing for a total of 404 yards. With the win, Center Point remains undefeated, heading into an important Region 6 matchup on Friday, September 16, at Clay-Chalkville, the defending 6A state champion. While the season is still young, Center Point has a chance to raise a few eyebrows next week against one of the most dominant programs over the last 20 years.

“When we moved up to 6A, some people discounted us because we’re the new kids on the block, but we moved up at the perfect time,” Bates said. “We have a great senior class, and we have a nice junior class and our sophomore class is big. We’re going to play ball. That’s what it boils down to.”

“We’re not going to bow down to nobody,” Bruce said. “People thought we wouldn’t be able to last in this region but we’re good. We’re just going to keep playing fundamental football and execute the game plan that the coaches put in.”

Lastly, the new turf, with its brilliant green and colorful graphics, is a major step in the right direction for the program that was one of the last, if not the last, high school in the area still playing on natural grass. Bates said the new surface will push the Center Point football program to a new level, especially on rainy, damp nights like tonight.

“On the old surface, it would have been sloppy out here,” Bates said. “We can practice in the elements now and play with no issues. I’d like to give a shout-out to the county and the Jeffcoed for getting this done for us. It’s something the community needed.”