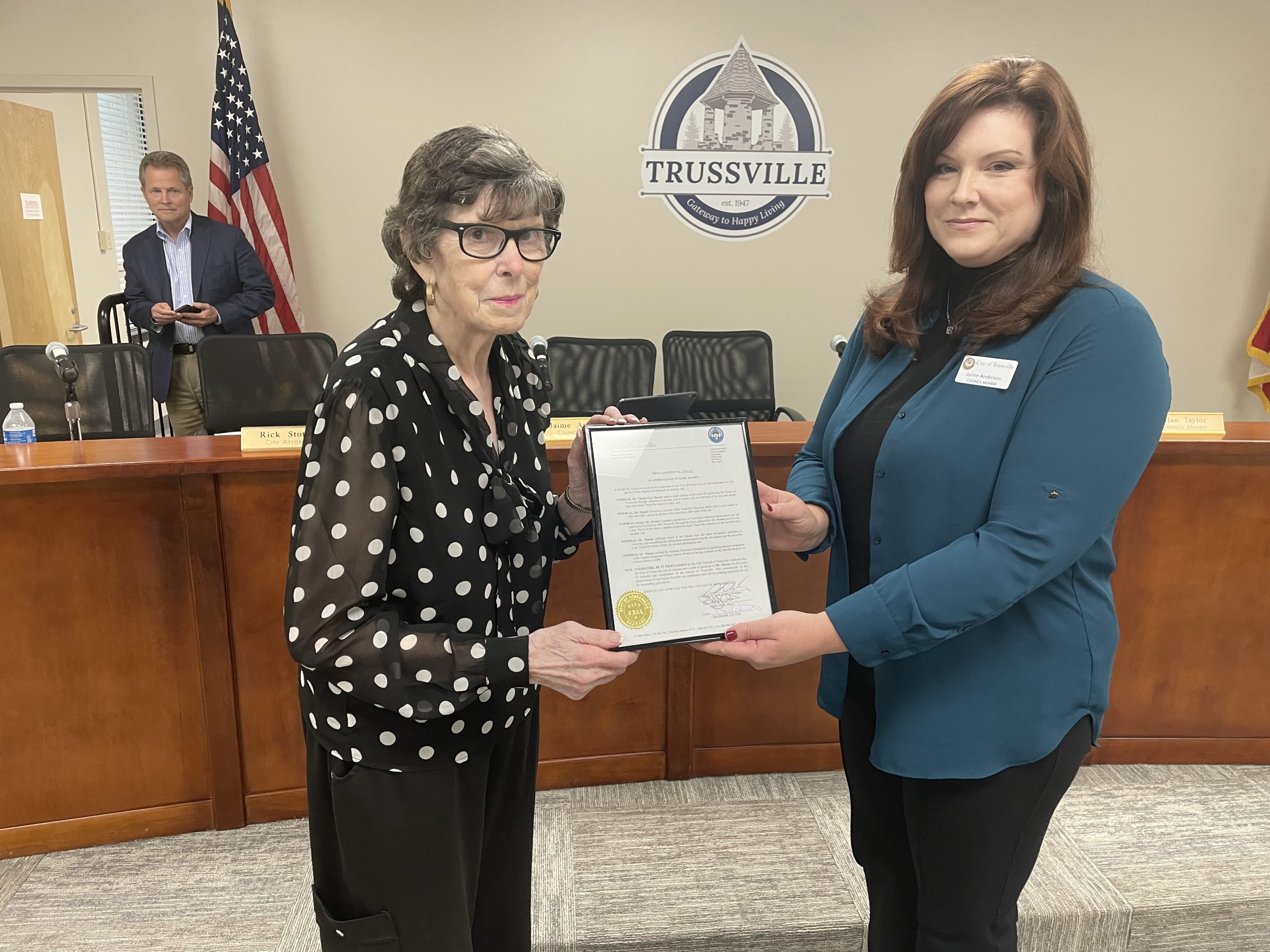 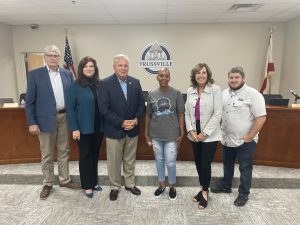 Trussville Mayor Buddy Choat and the City Council of Trussville proclaimed September 2022 as Alopecia Areata Awareness Month in the City of Trussville to create awareness and support the initiatives of medical and scientific research to find better treatments and, possibly, one day, a cure.

Alopecia Areata is an autoimmune skin disease resulting in the loss of hair on the scalp and elsewhere on the body.

Alopecia Areata affects approximately two percent of the population overall, including more than 6.8 million people in the United States alone, and occurs in males and females of all ages and races, with onset most often beginning in childhood.

According to the resolution, the City of Trussville has the authority or responsibility to control, manage, supervise, regulate, repair, maintain, or improve streets within its boundaries under Alabama Code Section 11-49-80. Trussville awarded its Edwards Lake Parkway lane widening bid to Dunn Construction Company, Inc. on May 19, 2022.

Dunn Construction has informed the City of Trussville, via project manager Civil Consultants Inc., that it plans to start construction work on September 19

Edwards Lake Parkway, between Morrow Road and Gadsden Highway, will close temporarily, beginning September 19, 2022, for sixty (60) days or until construction is deemed complete.

The council passed a resolution authorizing Choat to Commit $250,000 to a Railroad Crossing Elimination Grant available through the Federal Railroad Administration (FRA).

Rail transportation plays an essential role in the economic vitality of the City through the movement of freight and people, and the elimination of at-grade highway-rail and/or passenger-rail crossings will enhance safety and relieve traffic congestion by improving freight, commuter, and first-responder mobility.

Trussville has partnered with Norfolk-Southern and the City of Birmingham to submit a Railroad Crossing Elimination (RCE) planning and engineering grant application in the amount of $10,000,000 to the Federal Railroad Administration (FRA) to develop highway-rail and passenger-rail grade crossing improvement projects that focus on improving the safety and mobility of people, goods and services.

Foundations for Hope is raising money to provide clean drinking water to underserved communities in Kenya and provide protection from preventable disease, and the faith-based non-profit wishes to host a 5K run that begins and ends in the City Entertainment District on Saturday, October 29.

Council also approved a proclamation that the Trussville Witches Ride Parade is a citywide event. A number of good-hearted witches are raising money to provide financial relief to honor resident Caleb Wilson, who is fighting Neurofibromatosis Type 1 cancer, and this large coven wishes to ride their brooms or other modes of transportation from Cahaba Elementary School, along North Mall then North & South Chalkville Road, to Beech Street, ending at the Ferus Pavillion. 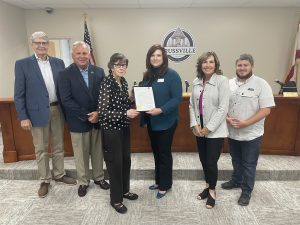 A proclamation honoring Claude Earl Massey was approved by the council. The proclamation states that “Historical preservation is important to all of us, allowing us to see and understand our past and how it has shaped and impacted our present.”

Massey spent a major portion of his adult life preserving the history of Trussville through the collection of pictures and of written and oral histories of the area and the people who have made Trussville what it is today. Massey served as a member of the Trussville Historical Board since it was created in 1983 until 2007 and as an adviser to the board from 2007 until 2020.

“Mr. Massey’s greatest contribution to Trussville’s historical preservation was the publication of a book in 1987, Trussville Through the Years, authored by Mr. Massey and his wife, Carol,” the proclamation states. “This book has been a valuable resource for many Trussville citizens over the last three-plus decades.”

Massey collected copies of the Cahaba Hub and other newspapers published in Trussville, microfilmed the information, and presented both the newspapers and the microfilm to the Trussville Public Library for use and safekeeping, and he assisted the Alabama Historical Commission in acquiring national recognition of the Cahaba Homestead Village Historic District by having it placed on the National Register of Historic Places in 2006

“The City of Trussville and its citizens owe a debt of gratitude to Mr. Massey for his years of research and compilation of the history of Trussville,” the proclamation states. “This commitment to the preservation of our history benefits our community and will be a lasting memorial for use by succeeding generations.”

The council also approved a Proclamation declaring September 17-23 as Constitution Week and urge all citizens to study the Constitution and reflect on the privilege of being an American with all the rights and responsibilities which that privilege involves.

The proclamation states, “It is the privilege and duty of the American people to commemorate the two hundred and thirty-second anniversary of the drafting of the Constitution of the United States of America with appropriate ceremonies and activities.”

Public Law 915 guarantees the issuing of a proclamation each year by the President of the United States of America designating September 17-23 as Constitution Week.

Choat also updated the council on the I-59 construction.

“I want to talk about Interstate 59,” Choat said. “I had a call last week with Mr. Leonard from ALDOT. That project has been pushed back. He’s coming out next Monday to meet with us and talk about it. The project was scheduled to start in February of next year. Looks like it’s gonna be pushed back to late spring and early summer before they start on that. So he’s gonna give some updates next week when he comes out here.”

In other matters, the council approved:

The next meeting of the Trussville City Council will be Tuesday, Sept. 27, 2022, beginning at 6 p.m.