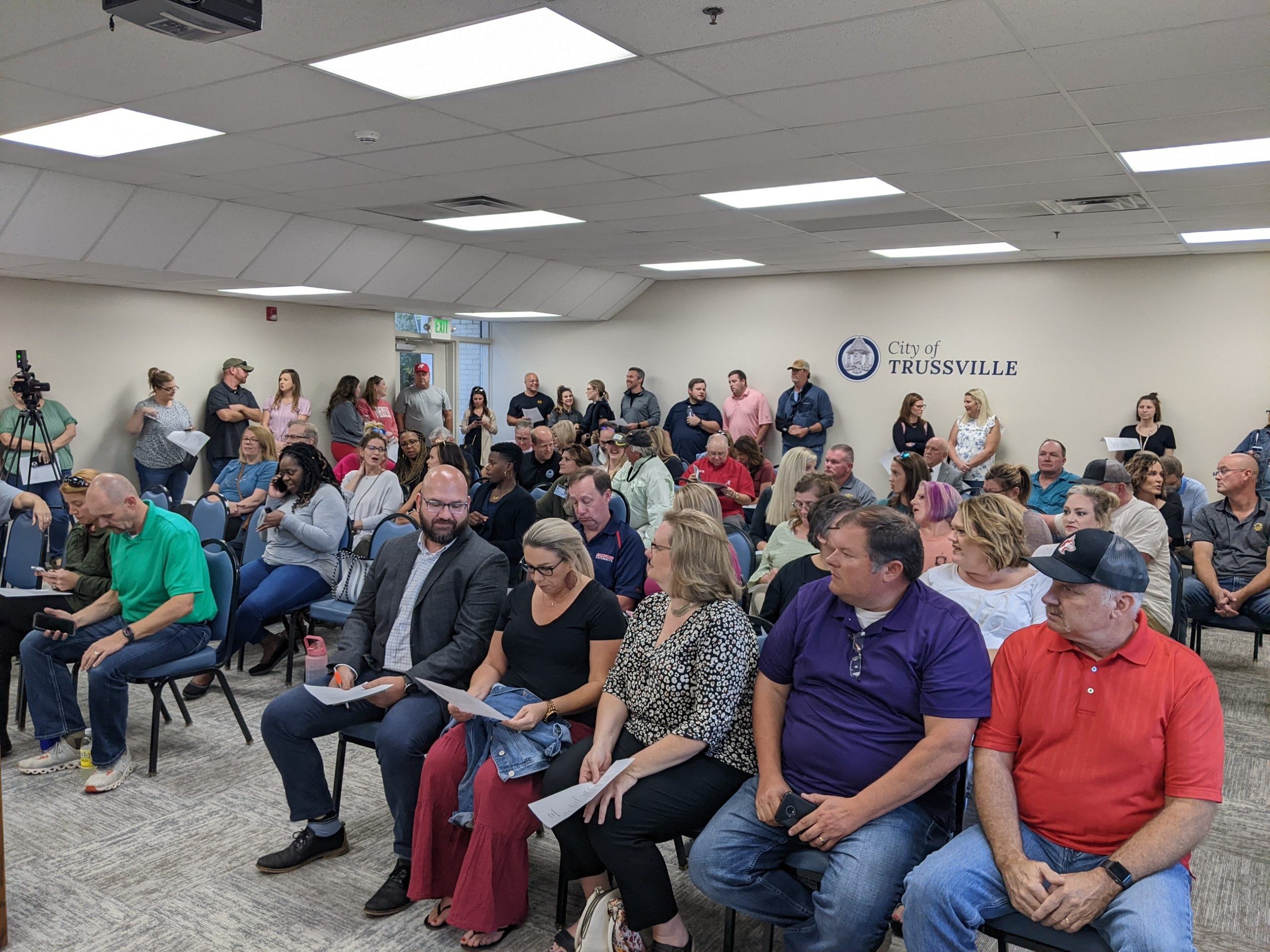 The Trussville City Council was packed with parents voicing their concerns about recent threats at the HTHS. (Photo by Scott Buttram)

TRUSSVILLE — The Trussville City Council heard from many concerned parents on Tuesday, Sept. 27, regarding the recent threats at Hewitt-Trussville High School (HTHS). 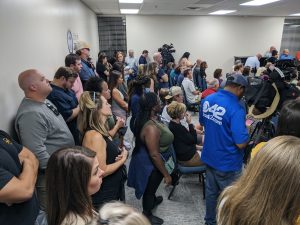 Thirty-five parents and citizens took to the podium to address the council, demanding that action take place at Trussville City Schools (TCS); many requested that change occurs within TCS.

“We’re all deeply disturbed by the events and details that have been exposed as information has been released,” Pruet said.

Council member and liaison for TCS, Lisa Bright, responded and said Trussville has a committee that was started two years ago.

Mayor Buddy Choat said TCS is under “specific direction on how to operate the school board.”

“We’re not allowed to interfere with that, and we have several conversations; I have conversations quite often with the school board members,” Choat said.

Pruet explained that he had a list of requests, “which will quickly turn to demands if they don’t see any action on this.”

“The Memorandum of Understanding (MOU) between the schools and the Trussville Police Department must be rewritten, and the language strengthened,” he said. “The MOU must contain clear steps to follow, unambiguous wording, detailed timelines, and repercussions if there’s a failure in the process.

“Secondly, the Student Code of Conduct Threat Assessment protocol must be rewritten to the same standard as the MOU. Additionally, the threat assessment protocol must include law enforcement involvement. It’s currently left to the discernment of the administration on the viability of the threat. Administrators are woefully underqualified to make such a judgment independent of law enforcement.

“Third, the Board of Education Policy Manual requires rewriting to include the MOU and the updated Threat Assessment protocol. You might also want to tell your board to update their policy as posted out there and remove attorneys’ comments that are still on it.

“Fourth, I reviewed multiple documents over the past few days, and there’s one glaring part missing from them all, and that is accountability. The current events force the issue of accountability to be added in a clear and correct term to all these documents. 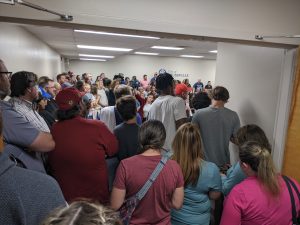 “All the revisions need to be conducted by an independent third party and reviewed by the council. We expect action from the leadership of the city, primarily you, the council and the mayor.”

Pruet asked the council if they would require the board to meet on this item prior to the next scheduled meeting or the subjects returned to school. Choat responded, “Absolutely.”

Another concerned parent, Laura Maddox, addressed the council and said that she had heard a collective response over the last 24 hours regarding who has control over the BOE.

Maddox said her request is simple.

Maddox received an overwhelming response of approval from those in attendance at the meeting who shared similar viewpoints as her.

Also speaking to the council was Karen Johns, who expressed her love for living in the city of Trussville, but in light of recent events, has felt the fear that many of the community members are feeling. 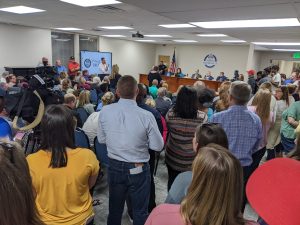 “This didn’t just wake up last Thursday, and you guys are dunked on,” Johns said. “It is about being a servant leader, and this community has that in their bones. Our children are learning some bad lessons right now. We don’t want that. We don’t want that as a community.”

Johns said Trussville residents love their city, and they believe in this community.

Jennifer Heinzman addressed the council about the false rumors that circulated throughout the high school earlier this week.

“Why in the world is my 14-year-old texting me in the middle of the school day, for the first time ever, to hear about some notebook hitlist, to hear there were false rumors that this child was out of alternative school yesterday, coming to shoot up the school,” Heinzman said. “That’s fine that it was false, that the rumor was false yesterday, but the fear was real.”

Heinzman broke down before the council, expressing her fear when she dropped her child off at school today.

“I can’t tell you that I didn’t cry in the driveway when I got home,” Heinzman said. “I can’t imagine being one of the parents of the 37. I know how I feel. I would be livid.”

Also addressing the board was Melissa Keck, who asked the council how Neill was hired and how she can be removed.

“The board that is appointed by the city does the hiring, contract renewals, and the evaluation,” Choat said. “Dr. Neill was hired many boards ago. So none of those board members are actually there now. All this falls on the board, so the board is responsible for hiring and/or terminating the superintendent.”

Many other parents addressed concerns about the lack of communication between the school system and the parents. Most commented on how they received the daily “Husky Update” but not an update on the current situation. 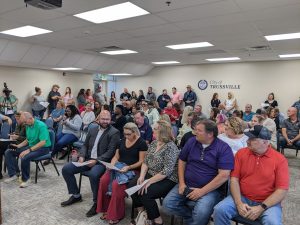 The Trussville City Council was packed with parents voicing their concerns about recent threats at the HTHS. (Photo by Scott Buttram)

“That’s all I want to say is that there’s a lack of communication and transparency,” Maddox said. “I think every single person here knows it.”

Choat addressed the crowd and said there were many things the council had heard tonight, which will be brought up tomorrow in a meeting. Those in attendance at the meeting tomorrow will be Choat, two councilors, Neill, two school board members, and the city attorney.

“I appreciate everyone that we had here tonight,” Choat said in an interview after the meeting. “Their message is loud and clear, which we understand, and that’s why we had already, before the meeting tonight, scheduled this very important meeting tomorrow to talk about things that are concerning to not only me and the council, but to the parents. I think this is what we needed to hear.”

The entire council meeting can be viewed below.

In other news, the council approved: