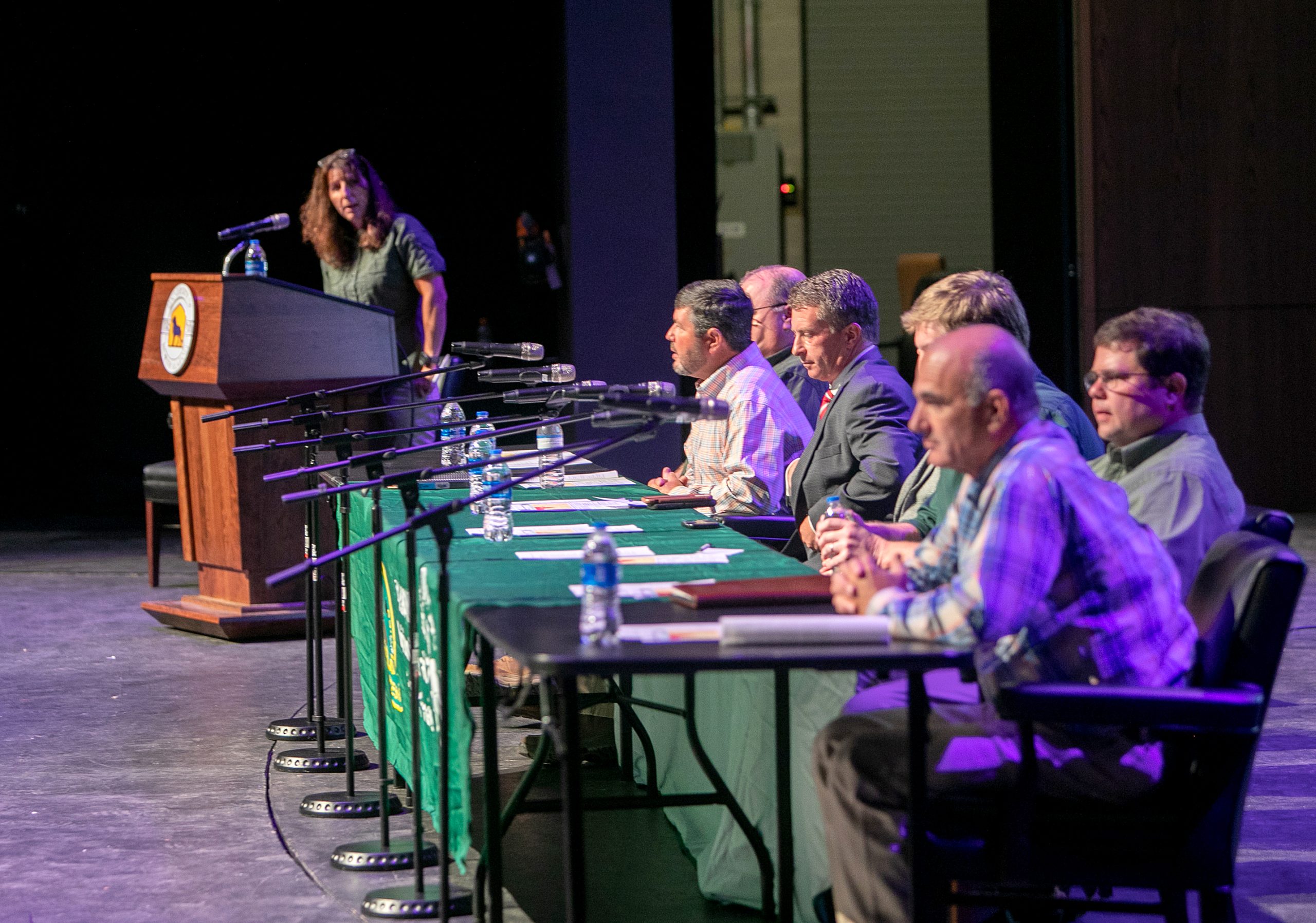 One of the messages the Alabama Department of Conservation and Natural Resources’ (ADCNR) Wildlife and Freshwater Fisheries (WFF) Division wanted to convey last week at the CWD (chronic wasting disease) public meeting in Florence was to thank Alabama hunters for their response during the 2021-2022 white-tailed deer season. 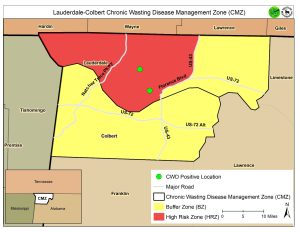 WFF Outreach Coordinator Marianne Gauldin was among those greeting attendees at the meeting.

“It was great to see so many members of the community interested in the health and future of our wildlife resources,” Gauldin said. “Our staff also appreciates the opportunity to interact with them and openly discuss these topics and further understanding of this disease and related regulations.”

Amy Silvano, Assistant Chief of the WFF’s Wildlife Section, said last week’s meeting was a follow-up from the January 2022 public meeting held when the first case of CWD was confirmed in Lauderdale County in northwest Alabama.

When the first case was confirmed on January 6, an emergency regulation was signed the next day to establish the CWD Management Zone (CMZ) in Lauderdale and Colbert counties, encompassing the high-risk zone (HRZ) of Lauderdale County west of U.S. Highway 43 and the buffer zone (BZ), the remaining area east of Highway 43 in Lauderdale County and all of Colbert County. The emergency regulation also extended the either-sex deer season on all open permit, private, and WMA lands, removed the seasonal and daily bag limits for antlered and unantlered deer, and removed the antler restriction for deer harvest in the CMZ. It became mandatory for any deer harvested within the HRZ to be made available for sampling. Hunters were strongly encouraged that deer harvested in the BZ be sampled. Carcass restrictions were also put in place that prohibited the transport of deer carcasses and deer parts in the CMZ. Deer harvested in the HRZ must remain in the HRZ, and deer harvested in the BZ must remain in the CMZ.

“The reason for relaxing harvest regulations in Lauderdale and Colbert counties for the remainder of the season was to remove barriers for us to get samples,” Silvano said. “We were relying on our hunters to get those samples. We had 30 days left in the 2021-2022 season, so we wanted to engage our hunters, who have always been our best cooperators in managing the deer herd. When we had our first positive, we didn’t know what the extent or distribution of the disease could be in that area.”

Prior to last season’s emergency regulation, WFF had received 65 samples from the CMZ as part of their normal CWD surveillance sampling procedures. After the emergency regulation went into effect, a total of 968 samples were collected from hunter-harvested deer in the CMZ, with 499 coming from Lauderdale County and 469 coming from Colbert County. This increased number of samples meant that WFF had access to more information about the distribution of the disease.

“We really do need to thank the hunters for providing us with that information,” Silvano said. “From those 968 samples, it wasn’t the best-case scenario – that we didn’t detect anything else – but we only detected one additional positive from a hunter-harvested deer, which was only a couple miles southeast of the original positive. That did not change any of our lines. It was detected in the HRZ and still 10 miles or more from Colbert County.” 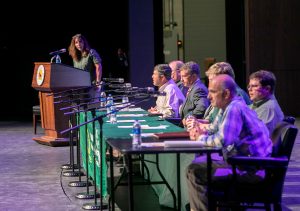 Because the emergency regulation was only in effect for 120 days, it was replaced with a new CWD regulation that went into effect on July 15. The zones and carcass transport restrictions remained the same. Under the new regulation, the baiting or supplemental feeding of deer is banned within the CMZ.

“We put in the ban because, unfortunately, we detected a second case,” Silvano said. “This regulation is put into place to help minimize the risk of disease spread. Baiting and supplemental feeding congregate animals at a certain point. CWD is a highly contagious disease. The carcass transport and movement regulation also helps to minimize the risk of spread.”

All deer harvested by hunters on public land in the CMZ are required to be sampled. Those public lands include the Freedom Hills WMA, Lauderdale WMA, Seven-Mile Island WMA and Riverton Community Hunting Area.

“Those mandatory weekends correspond to the weekends when we have peaks of harvest, opening weekend and during the rut,” Silvano said. “Outside of those weekends, we highly encourage people to voluntarily drop off hunter-harvested deer at the self-service freezer locations (www.outdooralabama.com/cwd/cwd-sampling). Those will be available 24/7. Check the interactive freezer location map. We are adding freezer locations as we get a new cooperator location. We have freezers in several counties throughout the state. You should be able to find one near you.”

Silvano said after the deer harvest regulations in the CMZ were relaxed during the last 30 days of the 2021-2022 season some hunters were concerned that too many deer would be harvested in the CMZ, impacting the population in the area. Silvano said that is not what happened at all. Game Check indicated harvest increased only about 15 percent during the last 30 days of the 2021-2022 season compared to same period during the 2020-2021 season. 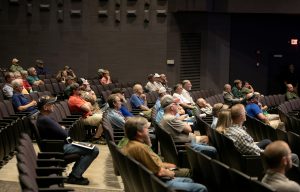 “That was fantastic and is what we needed for us to get CWD samples,’ she said. “But Game Check numbers indicated we had an overall decrease for the entire season in the CMZ. In Lauderdale County alone, we had an estimated 20% decrease in total harvest from the 2020-2021 season. Overall, we took less deer out of that area compared to the previous year. We were not decimating the deer population.”

WFF Director Chuck Sykes said as hunters prepare for the 2022-2023 deer season, which starts in October with archery season, he hopes the prevalence of CWD in Alabama will remain very low.

“I can’t say we’re not going to find another positive; I just hope it’s slow to spread and slow to come in from a different area,” Sykes said. “Last year, when we announced the positive, there was a lot of speculation and misinformation that was stirred up. After the social media warriors slowed down and took a breath, it settled down. The hunters responded extremely well. They provided the samples needed. I think it went as well as it possibly could have. I’m hopeful this year will be the same. We just want people to be calm. I’m going to have my deer tested. If I take a deer off the farm in Choctaw County, I’m possibly going to cook it that evening. Unless something makes me consider otherwise, I’m not concerned. I will submit some heads off our property for testing to help with our statewide surveillance.

“We want people to continue hunting and enjoying the outdoors. Be smart about CWD. Be aware of the risks and challenges and act accordingly.”

For more information about CWD in Alabama, visit www.outdooralabama.com/cwd-info.