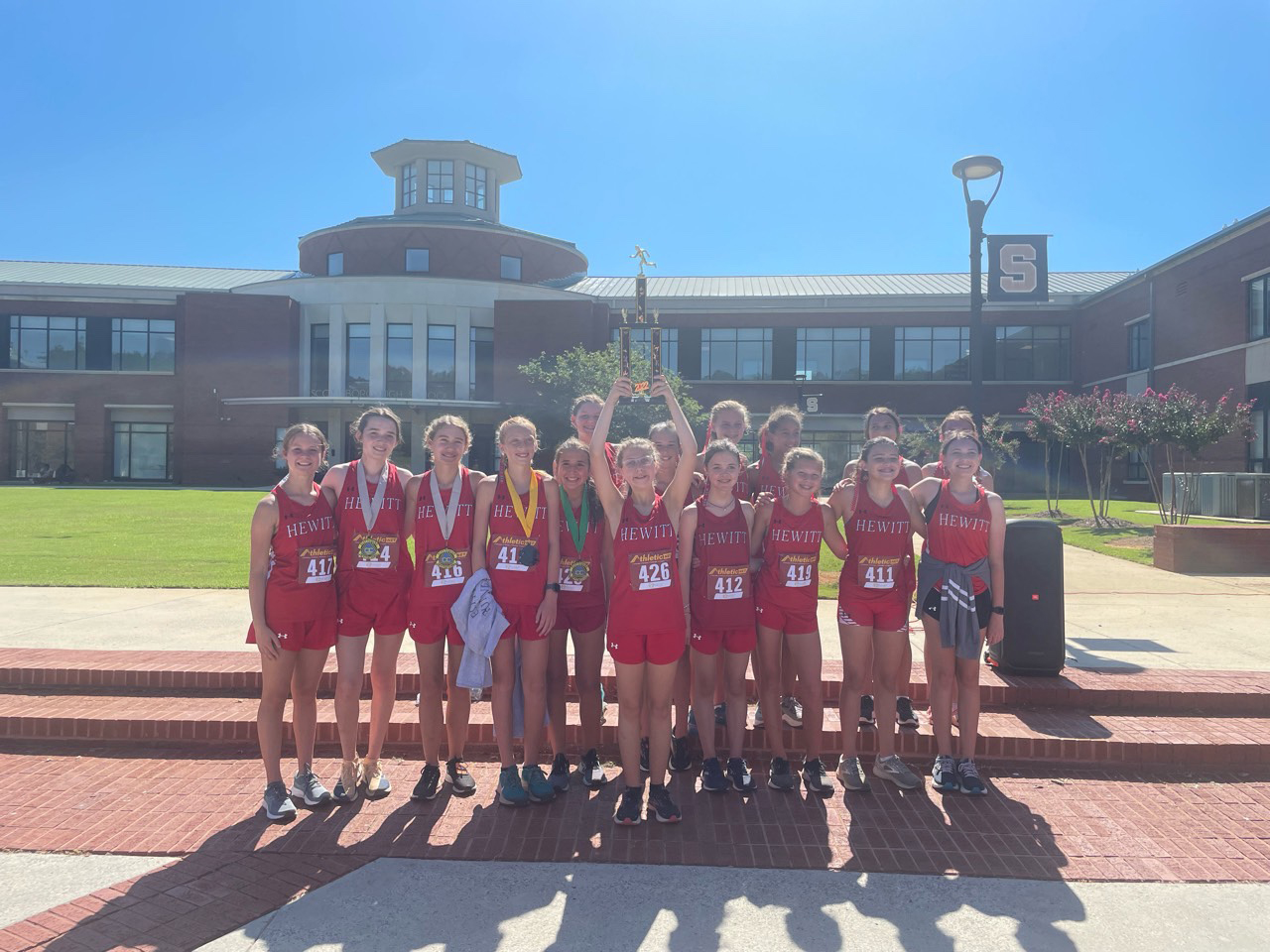 Sarah Thomas, middle with trophy, and her teammates from the Hewitt-Trussville Middle School Cross-Country team. Photo courtesy of James and Chanel Thomas

A true trailblazer: The inspirational story of Sarah Thomas

By John Goolsby, Special To The Tribune

TRUSSVILLE — Like most new middle school runners, Sarah Thomas was nervous when she took the starting line for the Trussville 2-mile cross-country race last month. It was an opportunity to try something new, and compete against herself and other runners for the first time. 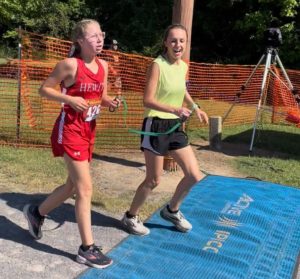 Sarah Thomas competes in a cross-country event with the help of her guide Sabrina Hudgins. Photo courtesy of James and Chanel Thomas.

But, for Sarah, it was much more than a race. Born blind, this was an opportunity for Sarah to be a part of something bigger than herself: part of a team.

Sarah’s parents, James and Chanel, try their best to raise her like they would a sighted 13-year-old. Sure, some accommodations have to be made for her, but they strive to give her the same opportunities and expectations that their daughters Ellen and Charlotte are given.

Early on, Sarah expressed a desire to play basketball, but that was just not possible due to her vision. With Ellen running for the high school cross country team, Sarah’s father, an avid runner himself, began to think that Cross Country might be an excellent team sport for her to try.

“The main reason we were excited about Sarah doing Cross Country was the fact that as a blind child, there are very few sports if any, that she can participate in as a member of a team,” he said. “Cross Country affords her that opportunity.”

The Thomases already knew Hewitt-Trussville High School cross county head coach, Matthew Michakle, and reached out to him first with their idea. After some initial discussions about doing Track or Cross Country, the two parties agreed to proceed with Cross Country.

“I didn’t want her to have to start with the shorter distances,” Thomas said. “I didn’t want to limit her and let her ever think she couldn’t do something that all her friends were doing.”

The next step in Sarah’s journey to the starting line was to take the request to Lance Walker, Hewitt-Trussville’s Athletic Director. Walker was open to the idea and contacted Marvin Chou of the Alabama High School Athletic Association (AHSAA) to gain more information about rules for blind runners. Unfortunately, the AHSAA did not have any rules or guidelines on the books.

Chou then contacted the National Federation of State High School Associations in early July to gather more information. On the first day of August, Walker finally received the long-awaited information from the AHSAA. With guidelines finally in hand, Sarah, who had been diligently training with her sister and father, was cleared to officially compete as a member of the Hewitt-Trussville Middle School Cross Country team.

Fortunately for Sarah, Trussville City Schools had recently hired a former University of North Alabama Cross Country runner, Sabrina Hudgins. Hudgins was approached with the idea of being Thomas’ guide runner and eagerly agreed to help her train and race.

“I didn’t want to limit her and let her ever think she couldn’t do something that all her friends were doing.”

The two work together daily at practice, with Hudgins guiding Sarah with a bungee rope tethering the two together. With the help of Thomas’ father, the two have developed a unique language they use while running, allowing Sarah to feel safe and aware of her surroundings at all times.

Sarah has steadily improved her practice and race pace over the last few weeks. She dropped her average mile pace by almost one minute and thirty seconds in only her second race held at Heardmont Park where she was guided by her sister Ellen.

“That was one of the coolest things that we have been able to experience as parents through this whole process,” said Thomas.

Sarah’s improvement has come, in part, because of an epiphany her father had a few weeks ago.

“It occurred to me that she really didn’t know what it looks like for people to run,” he said. “When we told her to go faster, she didn’t understand to lengthen her stride. She was taking faster short steps instead.”

It began to click with Thomas, and her stride improved after a few sessions on the family treadmill with her father. Thomas is also receiving gait training to improve her stride and prevent injuries by teaching her a proper running form.

James and Chanel Thomas will readily tell you that it takes a team effort to make their endeavor work.

“Matthew Michakle, along with middle school head coach Logan Cornutt and assistant coach Kelly Dunn are some of the best people on the planet,” Thomas’ father said. “They have been so supportive of this process. From a parental standpoint, you couldn’t ask for anything more.”

Cornutt has high praise for Thomas, “Sarah has done an excellent job for us this season and the team has been very supportive and encourages her any chance they get,” he said. “We are so excited and proud to have her on the team and her perseverance is such a motivator for all of her teammates.”

“We teach Sarah that her struggles in life are no different than what others have,” Thomas said. “We all have disabilities in some way; some are just more visible than others.”

The Thomas family ultimately wants the sport to provide their daughter with the experience of being part of a team and to impact others with disabilities positively.

“Her life is a testimony, and we tell her that she’ll never know how many people she will impact with what she does.”