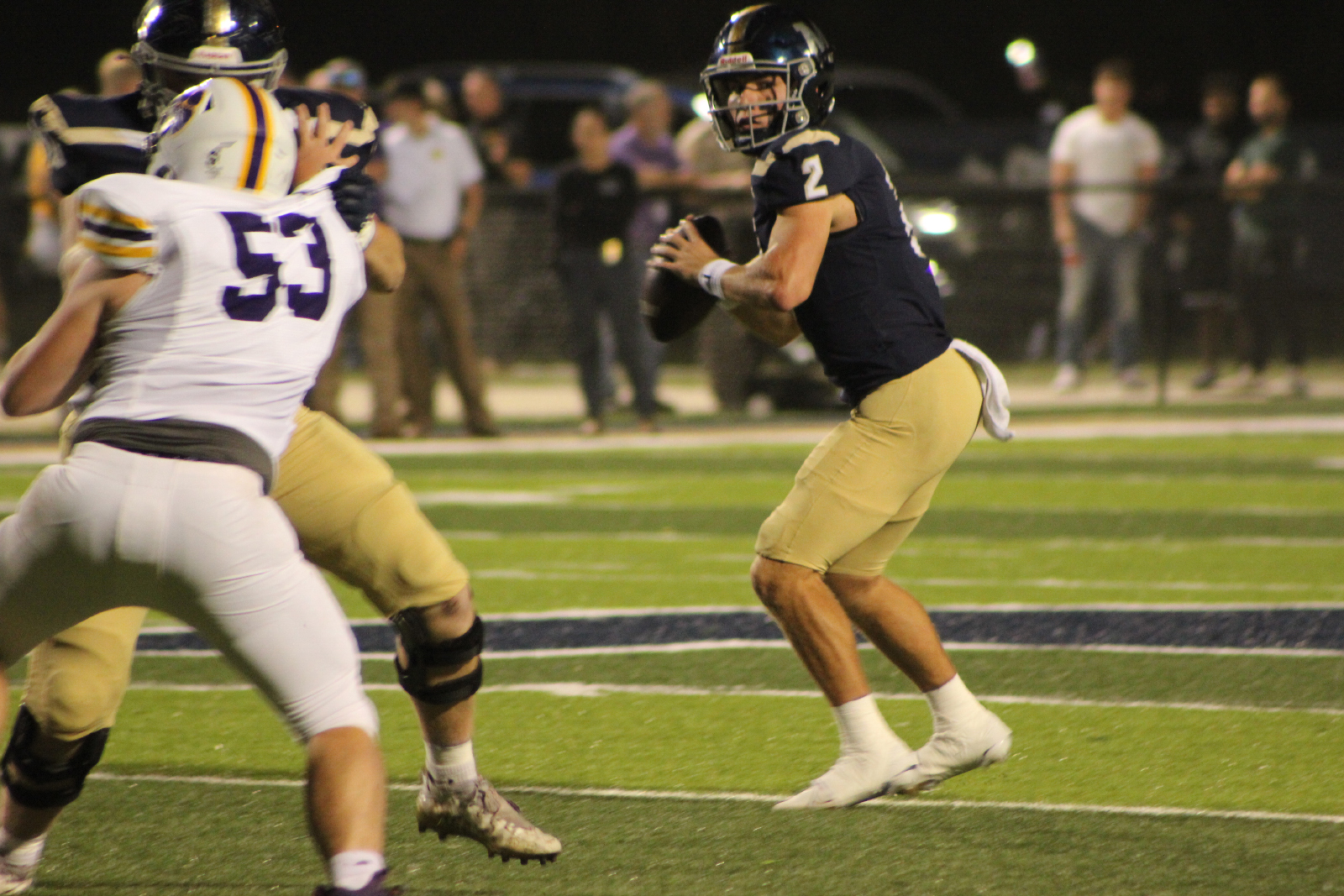 MOODY —The Moody Blue Devils continued their winning ways on Friday night as they defeated the Springville Tigers, 53-14, at The Bill for homecoming.

“Yeah, we scored.  I think it was still pretty sloppy overall.  We did not finish the way we wanted to,” said Moody Head Coach Jake Ganus. “We wanted to come out at half, have a good drive with the ‘ones’.  From there, we got stopped on fourth down. Then they scored twice on our D.  It’s frustrating but I’m proud of our guys.”

Moody started the scoring with 7:55 to go in the first quarter. After being stopped on their first drive and then holding the Tigers to a three-and-out, Moody then turned to junior running back Blaine Burke, who took the first play of the drive 77 yards for the game’s opening score. 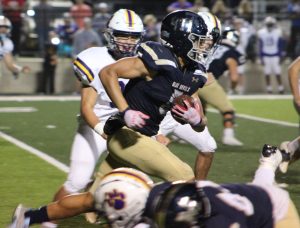 Moody running back Blaine Burke carries the ball in a win over Springville. Photo by Hannah Curran

On Springville’s next passion, Moody’s defense and got the ball back for the Blue Devils  On the next drive, Zane Smith would line up at quarterback for the first time this year and score from 4 yards out.  Another punt from Springville led to another Moody score.  Lineman Mason Myers would line up in the backfield once Moody drove the ball down to the Springville one-yard line. Myers would get the call, putting Moody up 19-0.

Moody would continue to put points on the board in the second quarter as quarterback Cole McCarty, who finished the night 20 of 25 for 311 yards, 4 touchdowns and 1 interception, found Davion Dozier – five receptions, 126 yards, and three touchdowns on the night – for touchdowns of 49 and 20 yards. As the defense continued to dominate, Moody would score again with 13 seconds in the as McCarty would find Kolby Seymour to put the Blue Devils up 40-0 heading into the locker room.

The second half started with Springville being held to a punt on their first drive.  Moody would then turn the ball over on downs, and Springville would turn to their backup quarterback, Boaz Thornton.  His first pass would be intercepted by Zane Smith who would return it 70 yards for a touchdown.

Down 47-0, it would have been easy for Springville to give up, but they would do just the opposite.  Continuing to fight, Jamari Cash would burst up the middle for a 44-yard touchdown and his partner, fellow running back Mahlon Alverson, would tack on a 13-yard touchdown in the fourth quarter, making the score 47-14. The final touchdown of the game would come on an eight-yard McCarty to Dozier connection, making it 53-14 Moody.

After winning his performance in his final homecoming game, Davion Dozier said, “Honestly it was just another game.  It didn’t matter who it was.  We made a lot of mistakes and we will have to get back this week and fix them.  I give all credit to our line.  If Cole doesn’t have time to throw the ball, we are nothing.”

“They are special.  I got the job on a Friday and met with just them (the seniors) Saturday morning and discussed where we wanted this thing to go,” said Gauns regarding the Moody seniors’ final homecoming game.  “They mean everything to me.  It’s my first senior class.”

Moody (7-0) will travel to Saint Clair County next and Springville (0-7) will host Lincoln.