TRUSSVILLE – Thrill seekers in The Tribune coverage area don’t have to look far to find one of the area’s best local haunts: the Insanitarium. 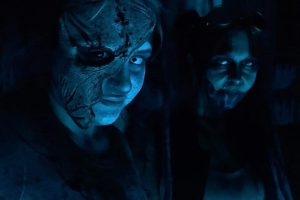 The haunted attraction, which originated in Pinson at the Palmerdale Homesteads Community Center (PHCC), is now conveniently nestled between the cities of Trussville and Argo, at 8433 Gadsden Highway, Trussville, AL, 35173.

This will be the Insanitarium’s first full walk-through event at its new location, and general admission will cost $20 per person, or guests can purchase “RIP” tickets to skip the line for $45.

In 2011, the Insanitarium opened as a fundraiser for the Pinson Valley High School arts department, as well as an effort to help restore the historic PHCC. Owner and director Justin McElroy worked at PVHS at the time, where he learned of the struggling arts department and wanted to make a difference.

“That’s always been my nature, to just help,” McElroy said. “When I came across Chris Screws of the art department … he was talking about how he didn’t have any funding. So I said, ‘Let’s open up a haunted house!’”

The Insanitarium had nine successful fundraising seasons before the 2020 pandemic shut it down, along with many other public events worldwide. In January 2021, McElroy and his “haunt family” were getting ready to plan their reopening when they were informed that they would no longer be able to operate out of the community center they had called home for the last decade.

“We didn’t just get up and move because we wanted to,” McElroy said. “It was because we had to; we had no other choice. But this is more than just a haunt – it’s a haunt family – and this family comes together like we always do. We adapt and overcome.”

In April 2021, McElroy bought nearly four acres of unincorporated land off Gadsden Highway, between Trussville and Argo. That October, the Insanitarium crew held a “Creature’s Carnival” to raise funds for a new building, which they broke ground on at the end of July 2022.

“It is a miracle that we are back,” McElroy said. “(This location) came at the right place, right time.”

For McElroy and the Insanitarium staff, this is more than just a haunted house; it’s a home and a family for those who have nowhere else to go. 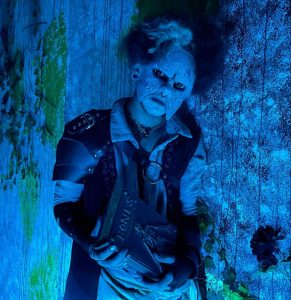 “When you’ve got kids that have broken homes and come from a broken place, they want a home,” he said. “I say kids, but I mean kids and adults. There are kids and adults that work here, and we try to make sure they have food in their mouths, whatever their situation.

“If you want testimonies, I have them all … of how many times this place has saved these peoples’ lives. I’ve had a girl who tried to (overdose) before coming up here; then she found this place and now she’s acting up here. I’ve had rape victims that have literally gotten stronger through this place because we don’t do victims in our haunt. That’s what makes (the Insanitarium) unique.”

When McElroy says there are no victims, he means it. Guests will find no prisoners, torture victims or ear-piercing screams in this walk-through haunt. Instead, they will find various creepy creatures waiting for them around the disorienting twists and turns of the trail.

“Insanitarium is a psychologically terrorizing haunted attraction,” McElroy said. “Submerging customers each year into an ominous environment, we explore deeper into a world full of creatures and the undead. … I guess the best way to say it is we are where the wild things are, kind of like the old storybook.”

Those who have visited the Insanitarium in the past will revisit familiar personalities such as Victorious (the machinists engineer), Splyce (the angry, macabre sculptor) and Dr. Ausenemen (the methodical doctor obsessed with mutating the undead). They will also find Dudley (the crude and insulting doll created from the mind of Serick the toy maker) and Pantaleon (the once-traveling gypsy and flatmate of Victorious).

“Everything is always themed-out to continue the storyline of Victorious (and) Dr. Ausenemen, and we still have our iconic creatures,” McElroy said. “We’re building into more characters and building off storylines … kind of taking it back to the streets of London, where we left off in 2019. But we have thrown some things in there that people should catch onto … little Easter eggs.”

Not only does McElroy plan to continue developing the ongoing storyline of the Insanitarium, but he and his team also have plans to add more buildings on their property in the future, utilizing the entire nearly-four-acre lot for an experience unlike anything else found in this area.

“We’re not settling,” he said. “We’re taking our time to actually focus and plan like we need to. It’s never going to be the same path, ever.”

For more information about the Insanitarium, visit www.insanitariumhaunt.com