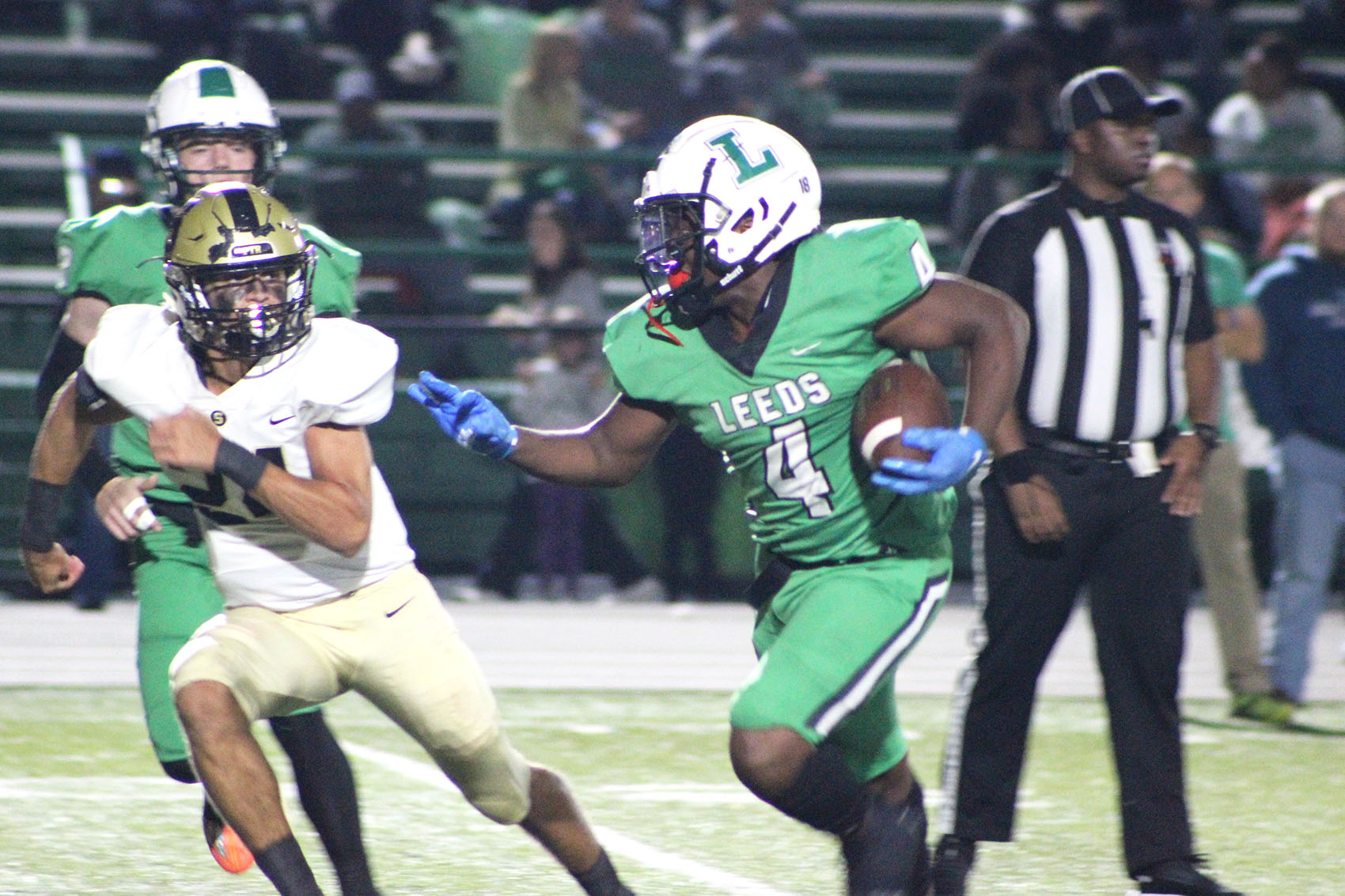 Leeds running back rushes the ball during the Green Wave's 35-10 win over Scottsboro, Friday, November 11. (Photo by Hannah Curran)

LEEDS — For the first time since 2015, the Leeds Green Wave is headed to the 3rd round of the AHSAA playoffs. Second-ranked Leeds (11-0) punched its ticket Friday night at Homer Smiles Field in a dominating 35-10 victory over Scottsboro. 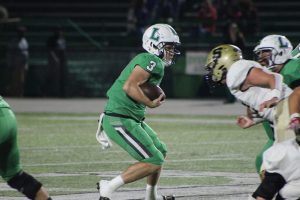 “We’ve been 2 years at this,” Leeds senior CJ Douglas said. “It feels good to finally finish the job in the 2nd round.”

Their reward: A 3rd round trip to Legion Field, to face 4th-ranked Ramsay.

“We’re excited to be there,” Leeds head coach Jerry Hood said. “Last 2 years, we’ve come up short in the 2nd round. Now we’re moving on to play probably one of the better teams in the state of Alabama.”

The Green Wave advanced Friday by following the same script that has worked for them throughout 2022, scoring on 3 of their first 4 possessions to lead 21-3 at halftime.

“We obviously played a really good game against a team that holds the ball for a really long time,” senior quarterback Jarod Latta said. “And we made the most of our possessions.”

Latta overcame an interception on the first play of the game to finish with 130 yards passing. He also rushed for a touchdown. The offense was particularly potent on 3rd down, converting all 4 of them in the first half. They finished 5-of-6 on 3rd down – the one they missed was converted on 4th down.

The Green Wave also got help from big plays in both halves. Latta found sophomore Conner Nelson for a 31-yard gain to set up the first touchdown of the game, a 7-yard Nelson run. Nelson finished with 2 touchdowns, and 86 yards rushing and receiving.

One possession later, a 25-yard run by Jeremiah Hunter set up Latta for a 3-yard TD run to give the home team a 14-0 lead.
After a Wildcat field goal made it 14-3, Leeds faced another 3rd down, this time from its own 22. Latta handed off to Douglas, who burst around the right end and past all the Scottsboro defenders, even slowing down at the very end before dancing into the end zone for a 21-3 lead.

“They’re probably going to get on me on film for not finishing the play, but we’ll take it,” Douglas said.
Scottsboro (7-5) got 94 yards from quarterback Jake Jones. Jones scored from 22 yards out in the 3rd quarter to cut the Leeds margin.

“We may be another season away from really being able to compete with a team of that caliber,” Scottsboro head coach Cris Bell said. “Proud of our guys. Proud of the way we came out here and competed in the second half, and moved the ball a little bit better in the second half.”

The Wildcats couldn’t hold the Green Wave on big 3rd-down plays. On the ensuing possession, facing 3rd and 9 from his own 29-yard line, Latta found Jaelyn Felder for 51 yards. Hunter took it the rest of the way one snap later, and Leeds led 28-3.

Leeds can now turn its attention to the Rams, who mauled Guntersville 45-9 Thursday night. Some players from Ramsay were reportedly at Homer Smiles Field Friday.

“Tomorrow’s probably a good time to look at it,” Latta said. “I’m really excited. I think it’ll be a really good game next week.”
Hood said he expects the atmosphere to be a special one.