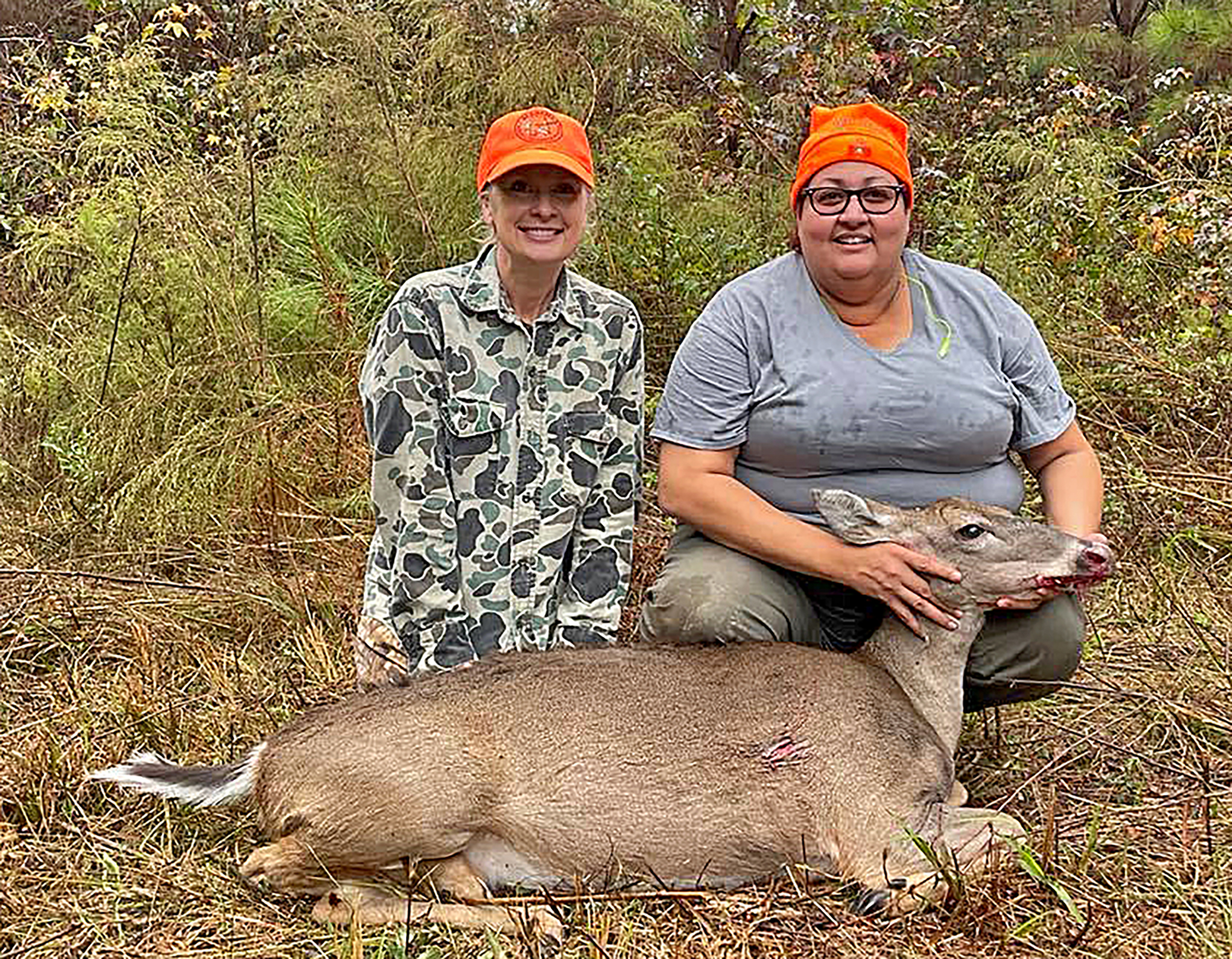 The Alabama Department of Conservation and Natural Resources’ (ADCNR) Wildlife and Freshwater Fisheries (WFF) Division is teaming with Buckmasters on an outreach program to promote hunting across social media platforms. 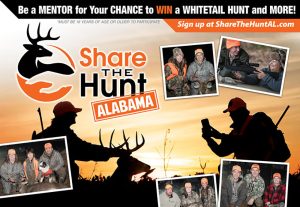 Alabama deer hunters 19 and older can Share the Hunt and possibly win a hunt with Jackie Bushman. (Photo courtesy of ADCNR)

The Share the Hunt initiative (https://buckmasters.com/Share-the-Hunt), which kicks off November 19, encourages deer hunters to introduce new people to the hunting opportunities available in Alabama’s great outdoors and record the hunt to share on social media. Each participating hunting mentor will receive a Buckmasters subscription and discount codes for some great hunting gear.

Don’t fret if you’re not a Buckmasters member. The Share the Hunt promotion is open to everyone!

All participants must be 19 years old or older, including the new hunters. A new hunter, or mentee, is defined as any adult who has not purchased a hunting license in the past three years. Mentors are required to submit photos of their hunt along with a brief description of the experience to be eligible for the rewards and be considered for Mentor of the Year. Bonus points will be given to mentors who share their experience on social media.

“I think everybody should know by now that hunters and license sales have been dwindling for the past several decades,” said Chuck Sykes, WFF Director. “We (WFF) created the Adult Mentored Hunting Program, Go Fish, Alabama!, and Shooting 101 to reach a new audience.”

Sykes said the Adult Mentored Hunting Program was started after he realized that even some WFF employees weren’t hunters. They wanted to learn to hunt but were hesitant to ask someone to take them. He hopes the partnership with Buckmasters will expand that outreach exponentially.

“With Share the Hunt, we’re working with Buckmasters, trying to reach their membership to stress to them how important it is to share their experience and teach someone new how to hunt,” he said. “Honestly, hunters I’ve seen over the years kind of live in an echo chamber. The people we associate with most are fairly like-minded, and most of us hunt. When you ask most hunters how many people buy a hunting license in Alabama, they think it’s 40 to 50% because that’s the group of people they hang around with. In reality, it’s 4% or less who buy a license.

“There are people we work with, go to church with, go to kids’ events with who would really like to learn to hunt and be more self-sufficient. They’re just a little hesitant to ask for that assistance. We need to step out of our comfort zone and ask people if they want to go and teach them what we know.” 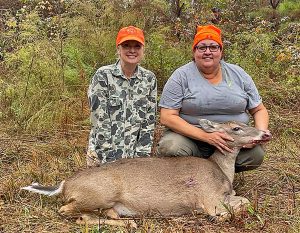 Sykes cautioned new hunters’ expectations can be completely different from those of us who grew up hunting.

“Something we have discovered through the years is that the motivations for hunting for these late-onset hunters, people who didn’t grow up hunting, are not what our motivations are,” he said. “They have no hunting tradition. They didn’t learn it from their grandfather or their father. You can’t talk to them about the tradition of hunting, and, most of the time, you can’t talk to them about the thrill, the sportsmanship, the ability to hunt an animal in its own backyard and get a sense of accomplishment from that. That does not resonate with them.

“They’re all about the food. Food joins a bunch of people. That’s something we enjoy. So, we have to make that the center, not that challenge of killing a big deer, not the thrill of the hunt, not the tradition. It’s about providing quality protein for the family and being self-sufficient. That’s what motivates most of the late-onset hunters. Now they may eventually get to the tradition part if they like it and hand it down to their kids. Once they do it long enough, they may get to the excitement and thrill of the hunt. Right now, those messages are lost.”

Sykes said the partnership with Buckmasters on Share the Hunt is a pilot program that will capitalize on the deer-hunting organization’s expansive membership.

“We don’t have the manpower to scale up the effort,” he said. “We felt partnering with Buckmasters was a natural fit. They have the membership and can reach potentially hundreds of thousands of seasoned hunters who could easily take one person a year and make a difference. Where we (WFF) can take maybe 100 people per year, they can take maybe 100,000 a year. We’re just trying to scale up what we know works.”

Jackie Bushman, founder, and CEO of Buckmasters agreed his organization and WFF have the same goals with Share the Hunt.

“Chris Blankenship (Conservation Commissioner) and Chuck are personal friends, and I think we’re all looking at the same thing – increase the numbers in our sport,” Bushman said. “I’ve always made this comment, if the 11 to 12 million deer hunters in the U.S. took one person with them, we’d have 24 million hunters.”

Bushman said he understands the access issue with hunting land and the aging of current hunters, but those hurdles must be overcome.

“If we love the outdoors and what we look forward to each fall, are we willing to share a hunting lease or private land?” he asked. “We’re not talking about family members. We’re talking about somebody that might be at the ballpark with you, or somebody at church, or somebody in business who has never experienced a hunt or maybe never even thought about it. 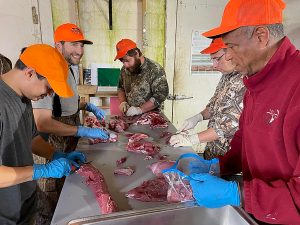 WFF R3 Coordinator Justin Grider, second from left, demonstrates how to process a deer after a successful mentored hunt. (Photo courtesy of ADCNR)

“Are we willing to take someone 19 or over out and teach them how to shoot, teach them about the shooting sports, buy them a license, and then take them hunting to see if they can get their first deer? There’s a lot of landowners who have management programs to shoot does. It doesn’t have to be a buck, although it can be. A lot of folks are looking for people to come in and help shoot the does.”

Bushman agrees with Sykes that the best method of outreach to newcomers is through social media.

“We want you to take someone hunting and take plenty of pictures,” Bushman said. “We want you to share the experience online and give back to the sport you’ve been taking from. That’s what it’s about. We’ve got sponsors who are going to provide digital coupons to the mentor and mentee. And somebody is going to win a hunt with me just to say thank you. The question is, how can we help our sport? How can we leave a legacy?”

Bushman, who started Buckmasters in 1986, has hunted deer all over North America and has bagged some giant bucks. He said people have asked him the same question for the past 30 years – what is his favorite buck?

“People are probably thinking that’s the Alberta (Canada) buck or the Montana buck,” he said. “No, it goes right back to Myrtlewood, Alabama, when I was 15 years old. We were doing a dog hunt, and that 6-inch spike came across the top of that ridge. I shot him with a 12-gauge and 00 buckshot. In my mind, it’s like it happened yesterday. That’s what got me hooked on deer hunting.