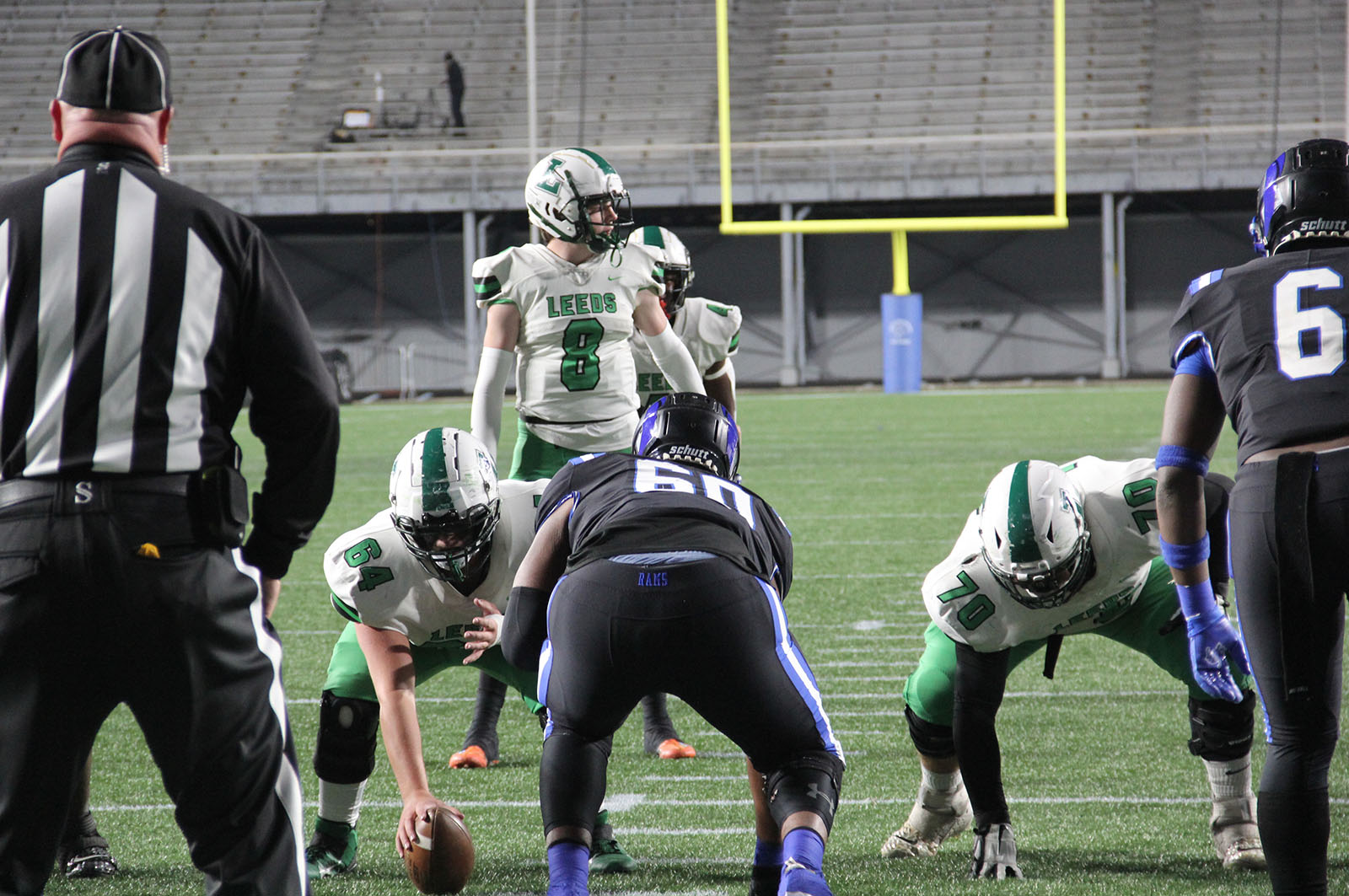 Leeds' Conner Nelson gets the play set up from deep in Ramsay territory, Friday, November 18. (Photo by Loyd McIntosh)

BIRMINGHAM — For 36 minutes, everything was going according to the standard script for Leeds football. 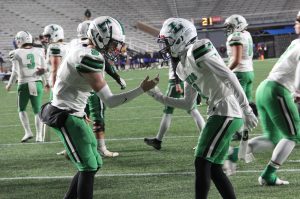 Conner Nelson (left) celebrates with Jaelyn Felder following the Green Wave’s first touchdown to tie the game with Ramsay 7-7. Leeds would eventually fall to the Rams, 27-19. (Photo by Loyd McIntosh)

The 2nd-ranked Green Wave controlled three quarters of its quarterfinal matchup against 4th-ranked Ramsay, and led 19-7 to begin the final period.

And then the narrative flipped.

Ramsay turned a 73-yard Jalen Jones punt return into a short field for an Ashton Ashford touchdown. They would turn two more Leeds turnovers into 13 more points, and left historic Legion Field with a 27-19 win.

“We’ve been tested,” Ramsay head coach Ronnie Jackson said afterward. “We’ve played Auburn. We’ve played Hueytown. I think all those games we played earlier, we knew that we can play with the big guys. They finally got a chance to show it.”

Ashford was the leader for the Rams (11-2), finishing with 146 yards rushing, almost all of it in the second half. His 4-yard touchdown with eight minutes left gave Ramsay the lead for good.

“We had to establish the run,” Jackson said. “We couldn’t do that the first half and we definitely did that the second half.”

That touchdown drive was the result of self-inflicted wounds from the visitors. Leeds quarterback Jarod Latta hooked up with Miles Jones on a screen pass that appeared to give the Green Wave a first down, but Jones fumbled during the run. The ensuing scramble that included two Ramsay defenders running with the ball and an unsportsmanlike conduct penalty against Leeds gave Ramsay possession at the Leeds 18 yard line to set up the touchdown.

“They’re (Ramsay) a good defensive team,” Leeds head coach Jerry Hood said. “When we did get something going, we had the screen call that’s going to give us a big first down and felt momentum shift when we fumbled that screen.”

Two possessions later, Ramsay’s Jermaine Foy picked off Latta, then returned the ball 40 yards for the final touchdown. The 27 points scored by Ramsay were 14 points better than any other team managed against the Green Wave all season.

Leeds (11-1) spent most of the first three quarters dominating the Ramsay side of the field. The Rams opened the scoring on a 56-yard catch and run by Jones on the first play from scrimmage. But the Green Wave did not yield another first down in the first half.

“That’s a team that averages 42 points a game,” Hood said. “Our defense is elite. They’ve been elite all year.”

Conner Nelson tied the game on a 4th-down quarterback sneak. One possession later, Leeds’ Kavion Henderson forced a fumble, which fellow pass rusher Chris Burge recovered at the Ramsay five. Jeremiah Hunter scored on third down to give the visitors a 13-7 lead.

A pair of Jackson Arthur field goals were the only points Leeds could manage the rest of the way.

Latta finished as the offensive leader for Leeds, with 146 yards passing on 14 completions. Following the interception that put Ramsay up 27-19, he led the Green Wave offense on a last-gasp drive that moved the ball all the way to the Ramsay five with 36 seconds left.

“Man, what a championship’s heart, to go down there and drive it, give yourself a chance to score, maybe get 2,” Hood said.

Three straight passes fell incomplete, however, and on fourth down Latta was pressured and could not get off a throw.

“We have been leaning on our defense all year long,” Jackson said. “They keep finding a way to win.”

The loss is the end of a run for Leeds that included the first region title under Hood and the first trip to the quarterfinals since 2015.