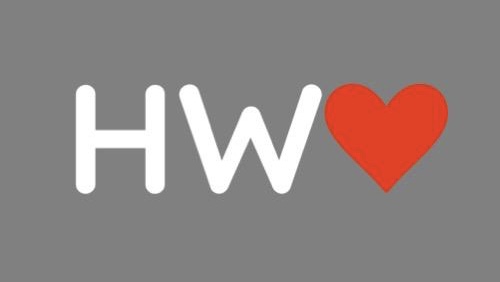 TRUSSVILLE – Hewitt-Trussville High School has had its share of ups and downs, especially in the last year, but one HTHS sophomore was already one step ahead with plans to implement positive changes within the student body, as well as the community as a whole. 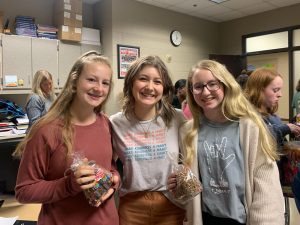 Stella Shipman entered the high school as a freshman in the fall of 2021, fresh out of the Covid pandemic and nationwide shutdown. Immediately, Stella saw a need to re-establish unity amongst the student body.

“I have been trying to start (a kindness) club since last year, my freshman year,” she said. “I finally got it founded this year, and the point of the club is to decrease the negativity and the bullying in our school (and) to increase inclusion and acceptance while spreading kindness through the school and community and encouraging students to come together for the common good. I wanted this club to be more than just acts of kindness. It would be a chance for students to relate to each other, to work together to make a difference, and come together and create a sense of unity between the kids.”

Stella began to research what types of clubs or activities could be done to bring students from different social groups together for the betterment of the school and student relations. In the process, she discovered that the school formerly had a Heritage Panel, but it was no longer active.

After spending a year researching and learning about kindness clubs at other schools, both local and nationwide, Stella approached Associate Principal Coach Jared Meads on Sept. 14, 2022, to propose founding an HTHS Kindness Club.

“I was doing a lot of research on my own – just looking up different schools close to Trussville and in Alabama and seeing what kind of clubs they had going,” she said. “I noticed a lot of schools had clubs that were anti-bullying clubs and other kindness clubs. I even went on Instagram and looked up clubs across the U.S. from different high schools and it looked like kids were finally coming together and doing activities together, and I felt like that was something that our school needed.”

Meads, enthusiastic about the idea, took the proposal to Acting Principal Joy Young and the club was approved. 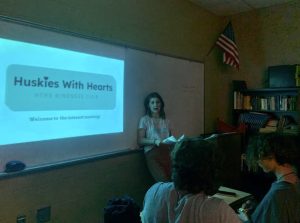 The HTHS Kindness Club, also known as Huskies with Hearts, held its first meeting on Oct. 12, and now meets the first and third Tuesday of each month.

Nearly 30 students attended the first meeting and Stella said that 25 students, so far, have officially signed up to be members of the club.

“For a new club, that was huge,” Stella’s mom, Stacey Shipman, said. “It’s growing, and it’s going to take some time … but it’s so needed.”

HTHS teachers Misti Patterson and Ashley Nix are teacher-sponsors for the Kindness Club, which meets during Husky Hour in one of their classrooms. Stella said the club plans to do at least one project or activity every month.

Their first event was in recognition of World Kindness Week, which was Nov. 13-19. On Monday, Nov. 14, club members gathered at the car line before school to welcome students and teachers as they arrived.

“We had the club out there with a bunch of signs with positive messages on them and stood in the car line and said ‘hey’ to students and teachers and kind of just pumped everybody up that morning, which was super fun,” Stella said, adding that she has a whole list of ideas including teacher appreciation activities, social media challenges, and trash pick-up days around the school and community.

“Hopefully, if it gets big enough, we could do school-wide assemblies and invite guest speakers to talk about different topics,” she said. “We could go into classes and speak about those topics.”

In addition to acts of kindness within the high school, Stella said the club has also discussed going out into the community and participating in food drives and coat drives for the poor.

For their December activity, the club plans to partner with an organization called “Be A Blessing Birmingham” to bring food and clothing to the homeless in downtown Birmingham. The event will take place at George Ward Park, located at 1901 Green Springs S, Birmingham, on Dec. 17, from 8 a.m. through 10 a.m.

“We’re going to go down there and just help out the homeless,” Stella said. “We’re going to hand out some food, some clothing, any items that they need. We’re opening it up so that any students from school can come, all the club members can come; we can invite family (and) friends. I’m super excited about it.”

Stella said that she needs a head count for anyone wanting to participate in this event as part of the HTHS Kindness Club/Huskies with Hearts by Dec. 6. Students and other interested parties can let her know they plan on attending via the club’s Instagram: @huskieswithhearts.

The Kindness Club held its first fundraiser Monday night, Nov. 21, at Taco Mama in Trussville. Between the hours of 5-9 p.m., 10% of all Taco Mama’s proceeds were donated to the club. 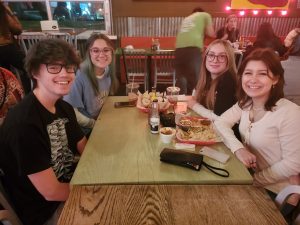 “We had a really, really good turnout,” Stella said. “A bunch of my friends from school came, a lot of the club members were there, and we just had a really big crowd, in general.”

Huskies with Hearts raised $285 from the Taco Mama fundraiser, which will help to fund supplies and future events.

Stacey added that, once the holidays are over, Stella plans for the Kindness Club activities to get back to focusing on the school and student body.

“They want to do community service and things like that, but she really wants this club to be about the students at the school,” Stacey said. “So, we even talked about using that (fundraiser) money to pay a speaker to come speak to the students about mental health, or bullying, or some hot topic that has been an issue at the school.”

In addition to being the founder of the HTHS Kindness Club, Stella is also an active member of HTHS Theater and Chamber Choir, and is taking advanced classes.

“She balances a ton, so of all kids, she’s probably the last kid that needed to add something else to her plate,” Stacey said. “But, by nature, she’s just a kind soul. She, I think, wants to change the world.”

Stella said she’s taking every opportunity she gets to reach out to every group of students within the high school, and encouraging as many students as possible to join. In addition to Instagram, she is having the Kindness Club promoted on overhead school announcements, and also has signs posted around the school with a QR code that takes students directly to the membership application, as well as information about the club. 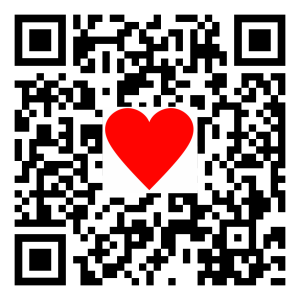 “I am using this opportunity to reach out to all groups, all students,” Stella said. “Anyone in any grade can join. I really want to get students to realize it’s OK if we’re different; it’s OK if we don’t believe in the same things; but we can still all respect each other and show love to each other and be kind despite our differences.

“I’m really hoping that this can make a culture change in not only our school, but our community,” she added. “I told our club members, this is representing our school; this is representing our student body. We are making ourselves known to other schools and to our community and to other students, and we want that to be an influence and to show people to think beyond themselves – to show compassion to people around them and to bring a change in a positive and productive way. I hope that, in the future, the club will have all types of people involved. I’m hoping that we can do big activities in the community and in the school, and I hope it really encourages kids to just be kind to everyone. I think our school and our environment in our school really needs it, and I feel like it’ll teach kids to just allow everybody to be heard and respected no matter who they are.”