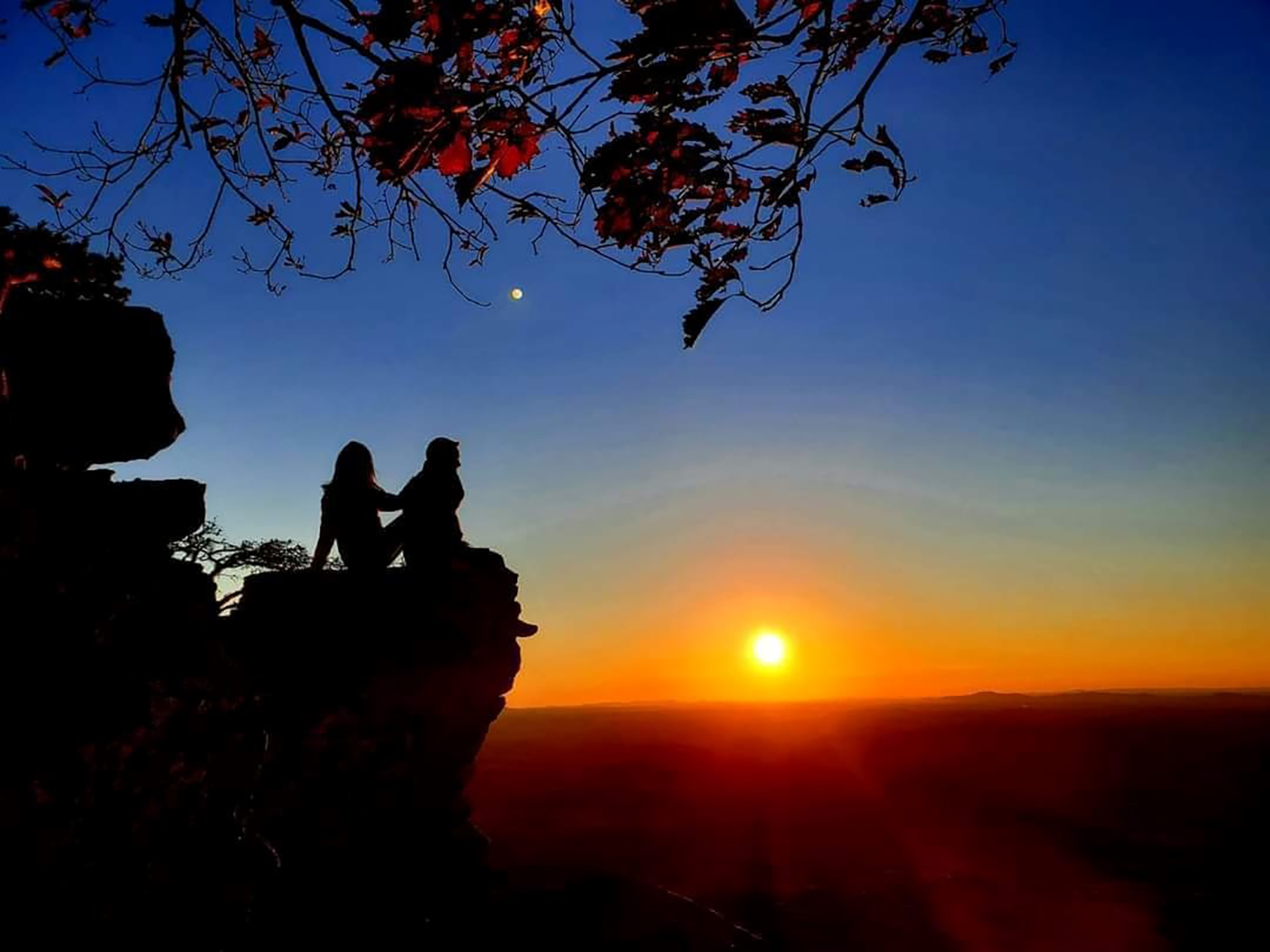 Alabama’s great outdoors offers so many benefits, from abundant recreational opportunities to stunning vistas, that it’s sometimes difficult to fathom. And some, like Randy and Jennifer Householder, even discovered another benefit – love. 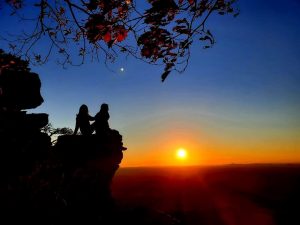 Alabama State Parks played a significant role in their relationship and eventual marriage earlier this year after Jennifer joined Randy’s Facebook group, Alabama Outdoor Adventurer, which has more than 19,000 members and focuses a great deal of attention on Alabama State Parks.

“I have enjoyed the outdoors for most of my adult life as far as hiking and stuff like that,” Randy said. “The way I kind of got going with State Parks is, for one, just loving Cheaha and the surrounding State Parks.”

In 2020, the Facebook group had a State Parks Challenge, where people registered and were required to take photos of certain features in the parks, like a photo scavenger hunt.

“We were able to drive a lot of traffic to the State Parks,” Randy said. “That helped build that love affair with State Parks by getting involved and helping promote and generate revenue for the State Parks. As I traveled the State Parks, I noticed some areas that needed improvements, and I wanted to help.”

Householder’s challenge efforts were rewarded that year with the Alabama State Parks Eagle Award, which is presented to people or organizations who have made outstanding contributions in support of State Parks.

“But we were just in love with the outdoors before any of that happened,” he said. “I’ve been hiking Cheaha, Guntersville, and Monte Sano, and we bike at Gulf State Park and Oak Mountain. We’ve just been enjoying the State Parks. With the challenge, you had to visit 15 State Parks. Getting out there and visiting some of the smaller parks was really neat.

“Jennifer and I love to travel and hike at different locations. We had not met during the challenge, but I realized there were a lot of nice areas to hike and explore within in our own state.”

The couple met on August 30, 2020, on the Coosa River for a kayaking event, and Jennifer said COVID was a contributor to their future together because the Alabama State Parks remained open during the pandemic.

With so many businesses and establishments closed, Jennifer said that doing something indoors was out of the question, which caused them to get outdoors and explore the beauty of our state.

“I found myself falling more in love with the outdoors throughout COVID,” she said. “I’m a member of Randy’s group, and they had advertised a kayaking event on the Coosa. I didn’t have anything else going that week. I signed up and participated in the kayaking event. I met a lot of really great people, especially Randy, obviously.

“I think that’s one of the benefits of the outdoors as well. Not only do we find ourselves falling in love with nature, but we also find people who share similar interests and often develop lifelong friendships and relationships. There’s just something about the outdoors that unites all of us.”

Both Randy and Jennifer were divorced and were not necessarily looking for a serious relationship when they went kayaking.

“I was not remotely looking for love,” Jennifer said. “We were both kind of happy with where we were. We just started talking, and a few weeks later we found ourselves dating. Largely through our love for the outdoors and our common interests, we fell in love and got married. 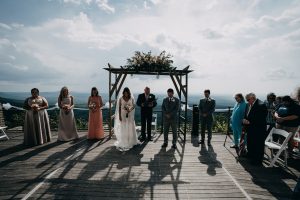 The couple chose to be wed at Cheaha, one of their favorite hiking locations. (Photo courtesy of Evan Lanier)

“Randy and I not only enjoy hiking, kayaking and the outdoors, we really enjoy the relationship side of it, putting together different groups. Some of the people signing up for an event might not be a hiker at all. This may be their first and second hike they’ve been on. It may be a hobby they are just starting to enjoy. It’s helping to spread and enjoy that love of the outdoors with others. We’ve found so many people who sometimes turn to the outdoors because they’re going through a lot of pain at home or a lot of pain in their lives. This is kind of a safe place for them. It’s the therapeutic benefit it has for each and every one of us.”

Randy didn’t pop the question right away when they started dating, but he finally realized the perfect time to ask for her hand in matrimony.

“Cheaha has always been very special to me, and I wanted the proposal to take place there,” he said. “We came out to camp and do a sunset hike to Pulpit Rock, which is also special to me. We hiked out to Pulpit Rock. We were sitting on the rock, and I asked her, ‘Are you going to marry me someday?’ That was always kind of a joke, because throughout that last month or so I had said that. She would say, ‘Well, you’re going to have to ask.’

“This particular time, I sat down next to her as the sun drops. I look over at her and said, ‘So are you going to marry me one day?’ She said again, ‘You’ll have to ask.’ That’s when I popped the ring out and said, ‘But I am asking; will you marry me?’ With all the expressions she showed of excitement and disbelief, she did say ‘Yes.'”

During their hike to Pulpit Rock, the couple just happened to meet a professional photographer. Unbeknownst to Jennifer, Randy tipped off the photographer about what was about to happen, and the camera shutter started chattering.

“I noticed he started taking a lot of photos of us, and he had us posing against the sunset,” Jennifer said. “I thought he sure has a vested interest in us. He sure is super nice. Then the proposal happened, and I asked Randy if he had arranged this; had he hired a photographer? He said, ‘Oh no, this happened by accident.’ Then I said God must have arranged it. It was the greatest engagement photo shoot ever.”

On the day of the wedding, the vows were exchanged at Cheaha, followed by the reception. However, when it was time for the sunset wedding photos, the weather didn’t cooperate. Rain clouds obscured the sun, so they rescheduled the photo shoot, and the photographer, Evan Lanier, captured some stunning images.

“It was perfect, beautiful,” Jennifer said.

Another interesting aspect of the Householder union was the couple asked those invited to not bring gifts and consider a contribution to Alabama State Parks instead.

“With us being older and not our first marriage, there’s not a lot of things we need,” Randy said. “We didn’t need a toaster. We thought it would be a good idea, and we put it on our invitations, to encourage our guests to not send or bring gifts and make donations to State Parks in lieu of gifts.”

“Jennifer and Randy’s support for the parks was so original and heartfelt, I was blown away. Their gift says it all: Parks for people, people for parks!” said Foundation President Dr. Dan Hendricks. 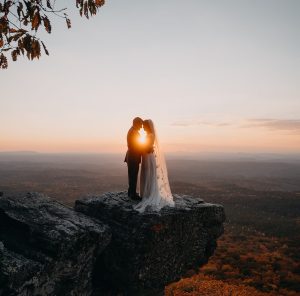 “We had several people who did that, and they gave sizable donations,” Jennifer said. “We were impressed with the donations. We thought it was a cool way to give back to the parks we so enjoy in celebration of our marriage and our love for each other. And most wedding gifts don’t come with a tax advantage.

“We are encouraging people who are looking at year-end tax planning and looking for ways to reduce their tax burdens to donate and support State Parks.”

Jennifer added that as much as she and Randy love to travel across North America, there’s no place like home.

“We do a lot of traveling across the country and Canada, and we’ve yet to visit a place that offers as much as the state of Alabama,” she said. “There might be some places with unparalleled beauty. That’s fair enough. But we have the beauty of the mountains and world-renowned beaches, all in one state. Then you have the lush landscape of rural Alabama and truly unprecedented sunsets and sunrises.

“I have yet to visit a place that offers more than our lovely little Sweet Home Alabama.”

Visit www.alapark.com for information on wedding venues and all the other opportunities the Alabama State Parks System offers.