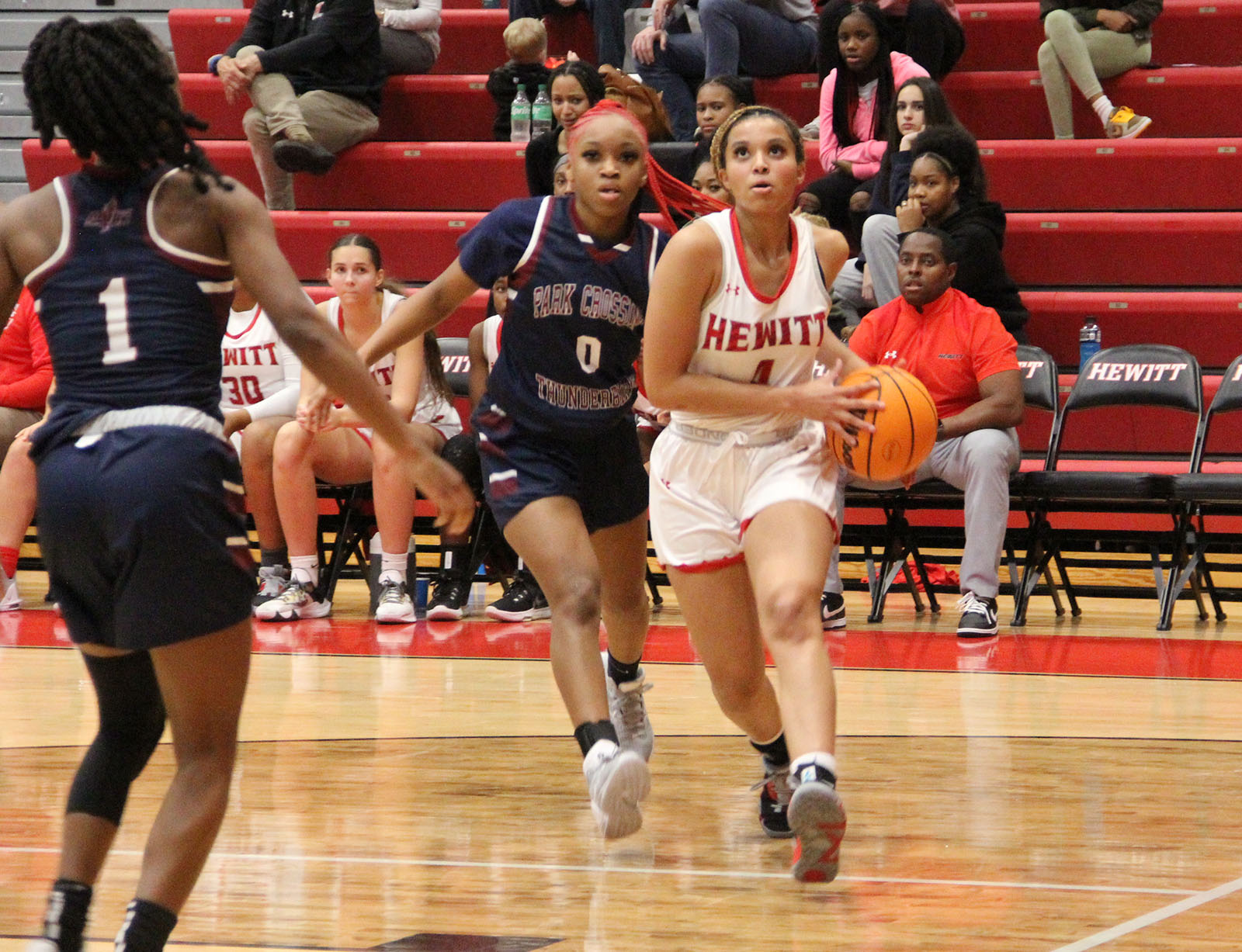 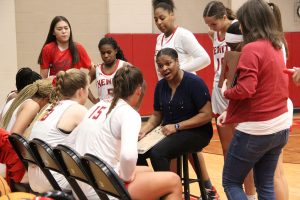 Hewitt-Trussville girls basketball head coach Tonya Hunter gets her point across during a time out, Friday, December 2. (Photo by Loyd McIntosh)

The Lady Huskies were led by the outstanding performance of senior guard April Hooks with 29 points on the night, including six three-pointers, outscoring the entire Lady Thunderbirds squad en route to Hewitt-Trussville’s second win over Park Crossing this season.

“This is who April Hooks is,” said Lady Huskies Head Coach Tonya Hunter. “She’s been shooting the ball very well and her confidence is high.” Hunter said Hooks has emerged as a dynamic leader and will be key to the Lady Huskies’ success as the season rolls along.

“She set some goals earlier this year and she’s fighting for them,” explained Hunter, “so you’re going to see some really good performances from her this year.”

Much of Hewitt-Trussville’s offensive production started on defense as the athleticism of the Lady Huskies caused the Lady Thunderbirds problems all night. Hewitt scrambled for every loose ball and swarmed all over Park Crossing’s guards while senior center Lilly Gray dominated the pain all night long.

The Lady Huskies faced Park Crossing in the second game of the season in Montgomery, winning that contest 55-34. Hunter said the team has improved dramatically since then, especially on defense and rebounding on both ends of the floor.

“Defensively, we’re a little better than the first time around and we were able to get some buckets in transition,” said Hunter. “As far as our rebounding goes, that’s something we’ve been working on the last three days very hard.” 7

With the win, Hewitt-Trussville improves to 7-3 overall and stopped a two-game losing streak. After a hot start in which they won six out of their first seven games, the Lady Huskies came into Friday’s date with Park Crossing having lost their last two games.

The Lady Huskies fell to Good Hope, 51-47, on November 23 then lost to Mortimer-Jordan, 55-52, five days later on November 28. Hunter said she scheduled tougher competition in the first few weeks of the season to help prepare her Lady Huskies squad for the rigors of play in 7A Region 6.

“We’re playing probably one of the toughest early-season schedules we’ve played in a while,” explained Hunter. “I prefer is find out what we need to work on now rather than waiting until later,” said Hunter. “So we’re going to keep just keep going back to the lab and working hard.”

The Lady Huskies will face Hillcrest High School in their second of four-consecutive home games on Monday, December 5. Tipoff is scheduled for 5:30 p.m.