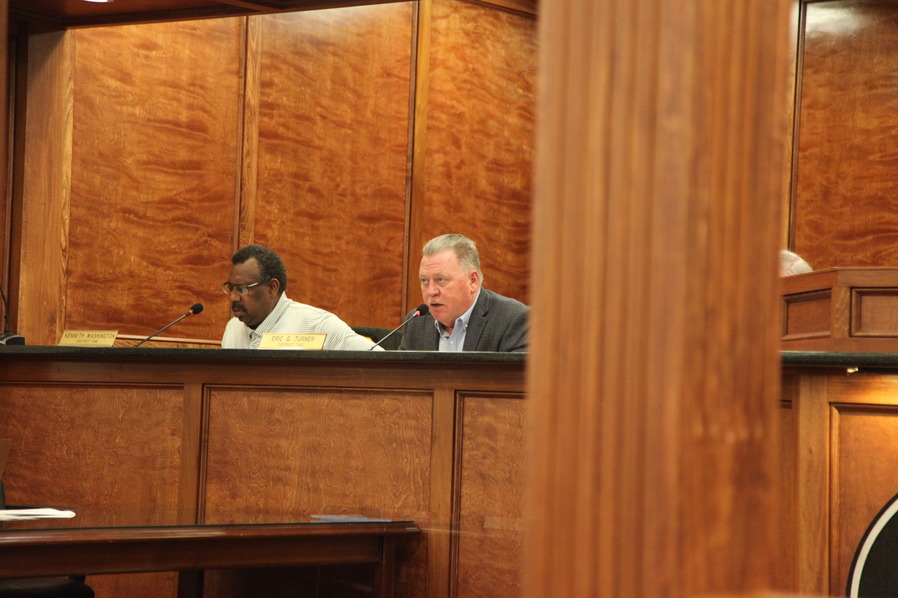 Councilman Eric Turner confronted Mayor David Miller over payments made for building purchases and certain fees in the past. (Photo by Nathan Prewett)

LEEDS – A meeting of the Leeds City Council on Dec. 5 was the site of another round of tensions as Councilman Eric Turner confronted Mayor David Miller over payments made for building purchases and certain fees in the past. 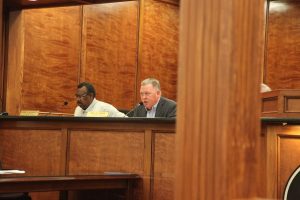 Councilman Eric Turner confronted Mayor David Miller over payments made for building purchases and certain fees in the past. (Photo by Nathan Prewett)

The meeting began with a recognition of the Leeds Youth Cheerleaders. Miller read aloud a proclamation that noted their participation in the Battle of the South cheerleading competition, and in particular, these accomplishments by teams and individuals:

After the council passed, most of the items under its new business attention was turned to the last, which was public documents as submitted by Turner. Turner said that he was contacted by the Leeds Water Works Board (LWWB) about documents that they had “concerns” with.

Turner stated that in April 2020, the LWWB purchased the section of the building where City Hall is located for $182,000. Later the money was deposited into the account of Barnes and Barnes Law PC. Turner provided copies of bank statements in a packet to the audience, including an email confirming the deposit as well as the deed to the building.

A check was then signed from Barnes and Barnes for $150,000 to the city, Turner said.

“So there’s a $32,000 discrepancy, and I guess [LWWB] ‘s question is: Where did that $32,000 go?” Turner asked Miller, who replied that the money paid for various fees, including the closing fee, lawyers’ fees, and title work.

Turner asked if there was a closing from a member of the board and was told that there was none. He then said that no one on the council voted on the payment as expenditures, as it was the LWWB’s money. He criticized the amount of money paid as they were $25,000 for legal fees and $6,300 for reportedly closing.

Turner said that the board simply wanted to buy the section and not deal with fees but reiterated the $32,000 that he said was “off.” Miller said that this would be investigated and asked Turner was alleging wrongdoing, to which Turner said that he was just questioning the payment. Miller continued to insist that a closing fee was paid.

Tensions flared then as Turner asked the audience if anyone attended the closing. Miller told him that he was “out of order,” drawing a reaction from the audience.

Turner then said that the purchase of the city government’s current building also needed to be investigated. The building formerly belonging to Alabama Power was purchased for $869,000 in 2020. Turner’s packet included information on this as well.

Turner said that during an executive session to discuss moving into another building, he asked the council to give him the authority to go to an online auction and make the bid for around $800,000. A resolution was approved to authorize him to make the bid.

Turner asked why Lee Barnes was reportedly sent to the auction and paid $43,000 for doing so, including $4,000 for closing.

Councilwoman DeVoris Ragland-Pierced asked City Attorney Johnny Brunson why he and Scott Barnett had not been sent to the auction. Brunson said such a purchase can’t be made without “proper credentials.”

Turner stated that he was told that there had to be an attorney with a broker’s license to perform this action but could not verify that despite research. He added that Barnes signed a $73,000 earnest money check for the city. He said that the council is supposed to vote on expenditures over $10,000 and had not voted to approve of Barnes being paid the money. 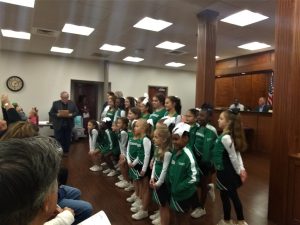 Leeds Mayor David Miller reads a proclamation honoring the Leeds Youth Cheerleaders for their wins at the Battle of the South competition. (Photo by Nathan Prewett)

“We have all the documents showing everything was done correctly and in order,” Miller commented to the Tribune. “And that any payments made were not only approved by the city, they were voted on and approved numerous times thereafter in finance committee meetings, which Mr. Turner was a member at the time, and council meetings when we ratified the monthly expenditures. His signature is on 33 different documents.”

Three people spoke during public comments, beginning with Stan Segrist, who said that requests to clear the culverts on Briarwood Lane have supposedly been ignored. He asked what to do if he is not able to clear the culverts. At first, Miller appeared not to answer him, but when told by some in the audience to answer, he said that he was and then referred Segrist to someone in the city that may be able to help.

Judd Moore was next. Moore was ejected at the previous meeting after he made several criticisms of the city government. He briefly spoke on the purchase of the city hall building from Alabama Power.

Lastly was Kenneth Hurst, who urged the council to make records accessible for the public, adding that they should be detailed. Miller said that the city has had a number of records but that “quite a few” were lost during a flooding several years before.