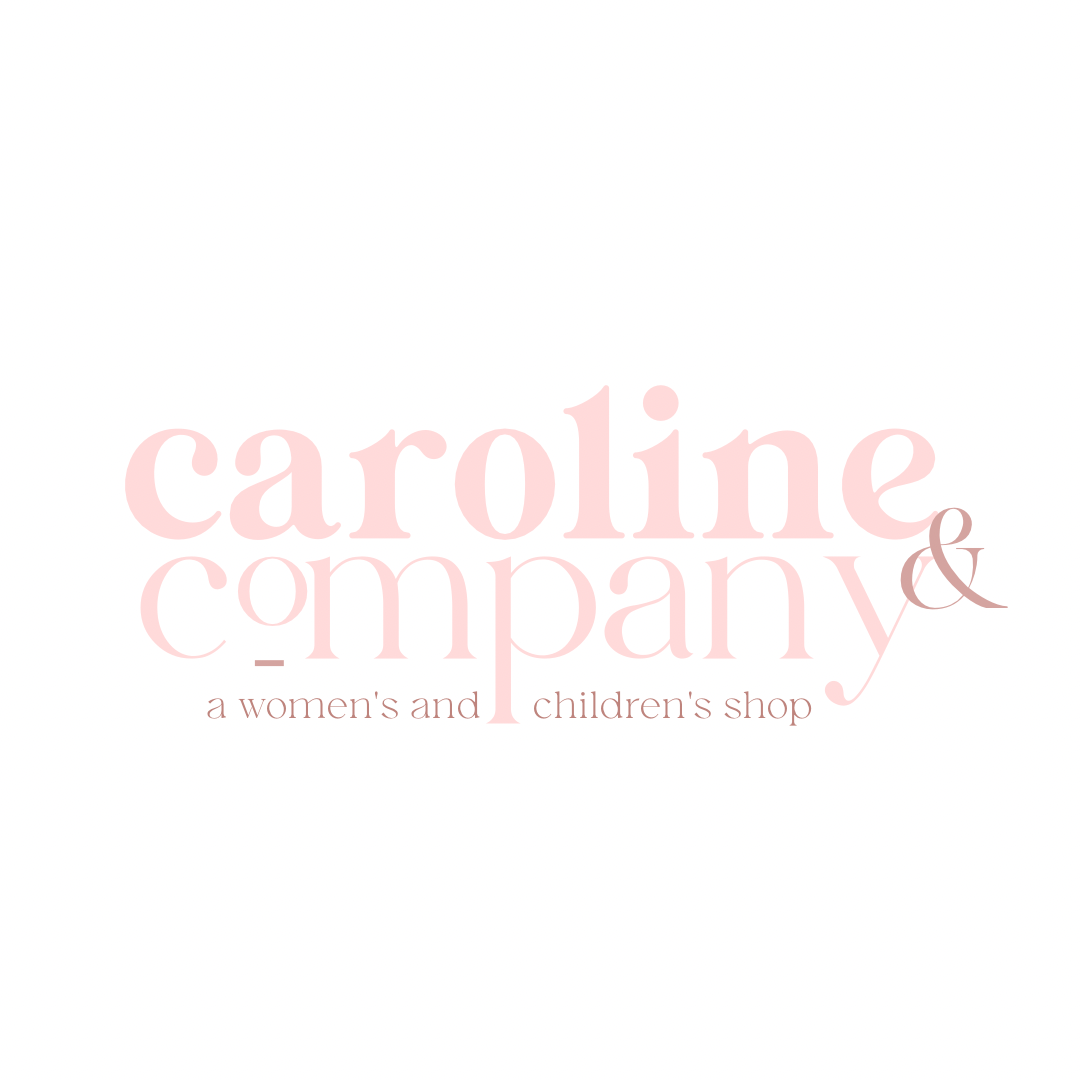 TRUSSVILLE – Anyone who frequents the historic district of downtown Trussville may be familiar with the small children’s boutique, Rebecca Brown’s, that has been located for years off North Chalkville Road next to the Kuttin’ Up hair salon. But something people may not have noticed is that over the last six months, Rebecca Brown’s has transformed into Caroline and Company, and along with the name change has come a few other changes, as well. 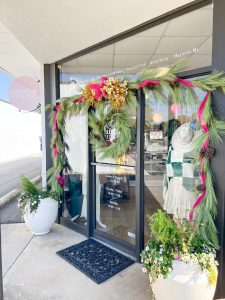 Caroline White grew up in Trussville – as did her parents – graduating from Hewitt-Trussville High School in 2014. Having always had an interest in fashion, White attended the University of Alabama, where she graduated in 2018 with a degree in Fashion Marketing.

“Fashion, style, all things fashion industry: it’s just something I’ve always been passionate about,” she said. “When I realized that I could go to school for that, it was a no-brainer. I feel like that’s just a gift that I was given.”

While in college, White started a fashion blog called “Caroline and Company,” which would then turn into an online women’s boutique after she graduated.

“The blog really just started as a creative outlet for me, and then my friends and family just encouraged me to start my own store,” she said. “I had a good support system around me.”

With the support of her family, Caroline and Company succeeded as an online boutique for three and a half years before a mutual friend introduced White to Rebecca Brown, who owned the children’s boutique in Trussville. 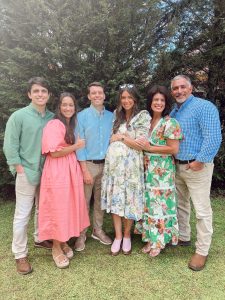 Caroline with her family, including her parents, siblings and husband. Left to Right: Nicholas Romano, Olivia Romano, Jasen White, Caroline White, Vanessa Romano, Nick Romano
^These are my siblings, husband and parents

“We met because we were in the same industry and we were just giving each other tips back and forth,” White said. “Honestly, the Lord just kind of took it from there. It was really a whirlwind.”

White said that she had not been considering making Caroline and Company a brick-and-mortar store, so when Brown approached her with the idea of taking over the Trussville boutique, she initially turned the offer down.

“She was wanting somebody to take it over who was from the town and was going to continue what she had already started,” White said. “When she mentioned it to me, it was really not something that I felt like I was ready to do. But that’s where the Lord took over and obviously this was His plan for my life and for the business. He so perfectly laid that out and I could see His hands working through all of it.”

Part of the reason White originally planned for Caroline and Company to remain an online-only boutique was that she did not think her dream of having a shop in the heart of Trussville was realistic.

“Honestly, this is the only spot I would have wanted to be able to do this,” she said.  “In my dreams, I never really had thoughts of opening a brick-and-mortar store, mostly because I didn’t think it would be able to happen on all my terms – having a store right in the center of my hometown. I never thought would be a possibility, so when Rebecca mentioned it to me, it truly was a God-thing. I give Him all the glory and praise for it.” 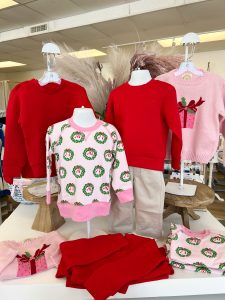 Caroline and Company offers many of the same children’s brands customers are accustomed to finding at Rebecca Brown’s, including The Beaufort Bonnet Company, Angel Dear, Noodle & Boo, Pixie Lily, Kissy Kissy, Paty, and Salisbury. However, in addition to the baby and children’s items, Caroline and Company also offers a wide variety of clothing, shoes, jewelry, and accessories for women of all ages.

“We are continuing everything that Rebecca started; we have newborn through (children’s) 5/6,” White said. “Then, I’ve added the women’s part, which is Caroline and Company, that I’ve had previously online. We have a super wide range of customers.”

One fun fact that customers may not even think to question is the meaning behind the name Caroline and Company. While the addition of “and Company” has become a sort of generic addition to many business names, for White, it has a much deeper significance.

“My name is Caroline, so it was meant to represent me and the company around me,” White said. “We are the company that we keep, and so that’s where the ‘company’ part comes from. We have a little phrase, ‘in good company.’ It’s kind of our slogan. It just seemed a perfect fit to sum up the meaning of the company.” 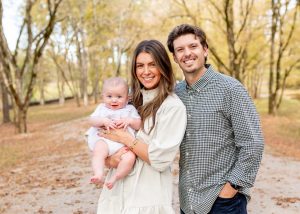 Having grown up in the Trussville community, marrying her high school sweetheart who also grew up here, and returning back to their hometown after moving away for college, White said the addition of “company” to her business name alludes to the village of family and friends who have helped and inspired her along the way.

“The ‘company’ part was meant to represent the people who encouraged me in the past, the ones that inspire me daily, and the people that I hope to meet and bring into our company and our community that I surround myself with and we surround the store with,” she said. “People say it takes a village. It really does. My family is very hands-on and helps me all the time – every single one of them.”

Now that Caroline and Company is a brick-and-mortar store, White said that the meaning behind the name takes on even more depth, because she wants people to know that when they shop there, they’re in good company. 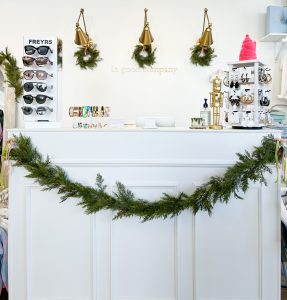 “It’s just come full circle and become more meaningful over the years,” she said. “I believe in strong family ties and being able to give back to the community … it was something that I always hoped I’d be able to do. I’m so grateful now for that opportunity.”

For those who prefer to shop online, the online boutique is still available at www.shopcarolineandcompany.com. Customers can also visit Caroline and Company on Facebook and Instagram.

“I’m honored to be able to be right here in the center of the town that I grew up in and that my family grew up in,” White said. “It’s so fun to see the growth of the town. I know so many of my customers and their families, and it’s fun to be able to see them face-to-face.” 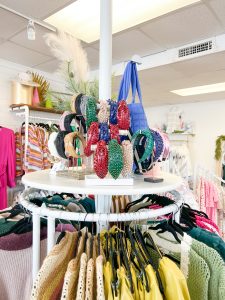 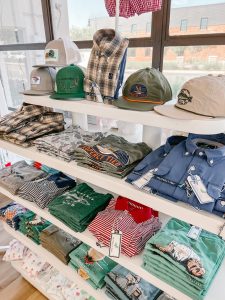 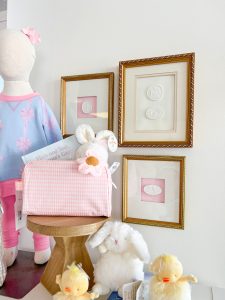 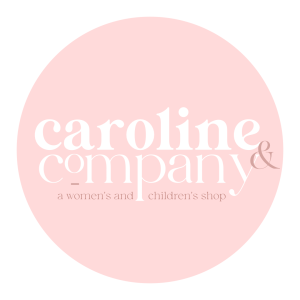 Caroline with her family, including her parents, siblings and husband. Left to Right: Nicholas Romano, Olivia Romano, Jasen White, Caroline White, Vanessa Romano, Nick Romano ^These are my siblings, husband and parents