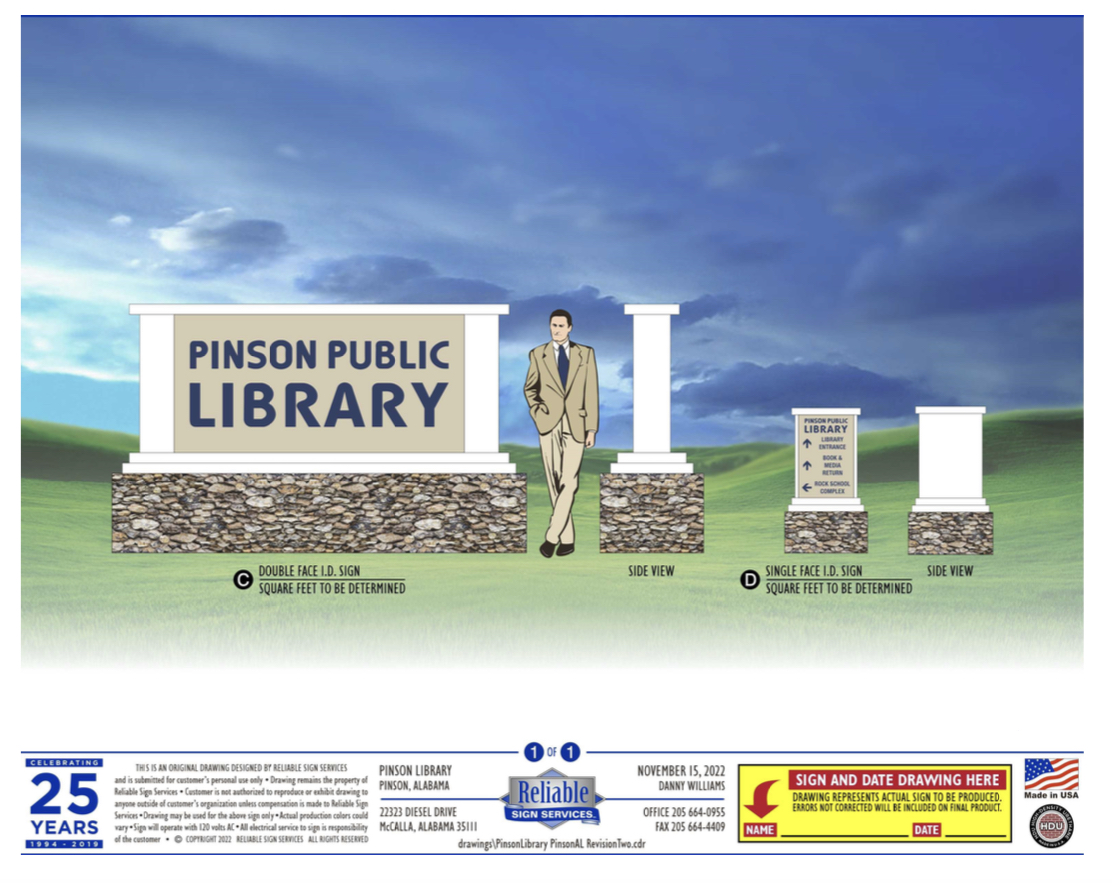 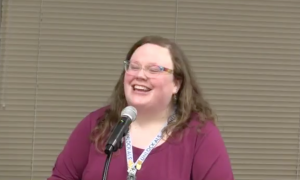 “I have given you guys the two designs that we have from the two different companies and the information and price involved,” Scanlan said. “As far as the library board’s concerned, I’m not sure there was exactly a favorite design. I, personally, like one of them better than the other. I like the sign from Signage the best and that’s the one that my staff seems to like, as well. It’s also open to additional changes, so that doesn’t have to necessarily be the final design for either of those. This is just kind of where we are so far.”

Scanlan added that Reliable Sign Services took a picture of the rock facing on the Rock School Complex and added that into their design. While Signage did not do that, Scanlan said that the base of whichever sign the council chooses will be rock-like, to match the building. 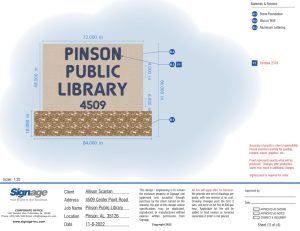 Mayor Joe Cochran said that he preferred the design from Reliable Sign Services, which was quoted at $19,965. The monument sign quote from Signage was $17,583, plus separate charges for permit acquisition ($250), permit cost ($100), and delivery and installation ($1,080).

“We’ve talked about this a lot over the last couple of years,” Cochran said. “There is a need for this sign, obviously, so I’m ready to move forward.”

Councilor Robbie Roberts made a motion to approve the funds for the Reliable Sign Services monument sign, and the motion was unanimously approved. 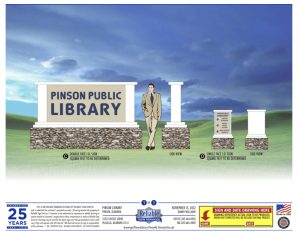 The council held a discussion about changing the date of Pinson CityFest, which normally takes place on the first Saturday in May. Councilor Roberts made a motion to schedule the event for April 29, 2023, with a budget of $15,000.

“The staff has looked into dates,” he said. “We have been doing it the first Saturday in May but that conflicts with some other festivals that are going on nearby, so we feel like we’ll be able to get more participation. Better yet, we’ll be able to secure even some more fun rides for the kids and more food vendors and other vendors, which (are) pretty popular. This is the portion we can control. We may not be able to control the weather – who knows what might happen that weekend – but let’s hope it’s beautiful.”

“Both of these gentlemen have, in my opinion, done an exemplary job at the high school,” Walker said. “Mr. Brandenburg has consistently grown the band over the last few years that I have been involved with the high school and Coach Barber has a state championship with the basketball team and they are currently number one in the state and number 43 nationally. So, I would recommend that we give each of these gentlemen a $5,000 supplement for the outstanding work they’ve done.”

The motion passed unanimously, and the rest of the council stated their appreciation and support of Brandenburg and Barber.

“I think both gentlemen are very deserving in how they pour into our kids and the difference they make in our community,” Mayor Cochran said. “I’m glad we’re able to do that.”

Additionally, Walker said that the basketball team has a cumulative GPA of 3.4.

“I think that people need to understand that not only is the basketball team very successful on the court, the band is very successful in their performances, but both these gentlemen are excellent educators,” Councilor Roberts said. “They also have a lot of impact among a lot of the students up there outside the classroom, which lends to a learning environment for all the students, including those that may not be on the basketball team or even in the band.”

The next meeting of the Pinson City Council will be Thursday, Feb. 2, 2023, at Pinson City Hall.
A pre-council work session will be held at 6:15 p.m., followed by the regular 7 p.m. council meeting.

To contact the author of this story, email mcgoughcrystal@gmail.com