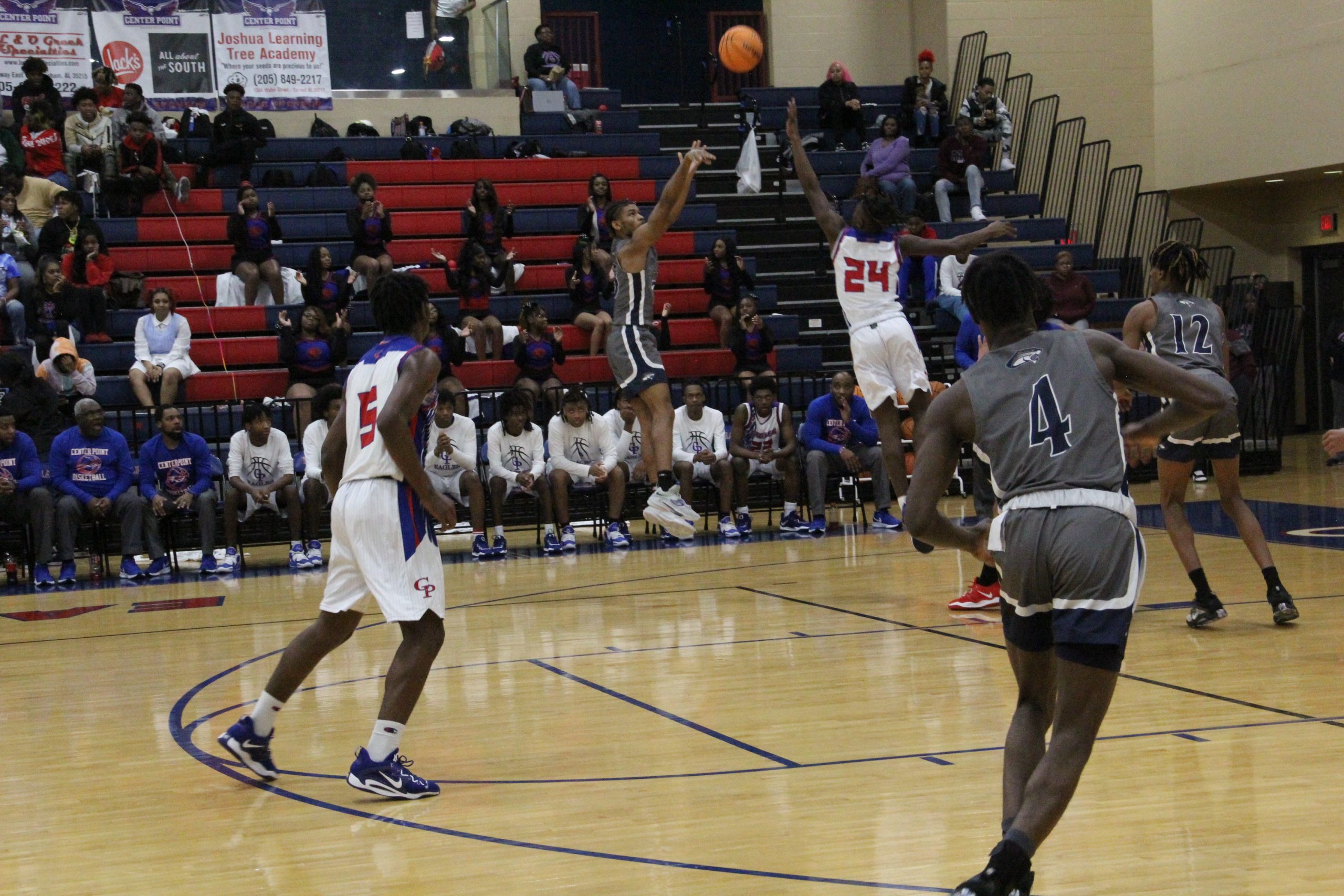 CENTER POINT — Clay-Chalkville made the eight-mile drive to Center Point and picked up a key area win on the road with a 67-41 rout over the Center Point High School Eagles Friday night. 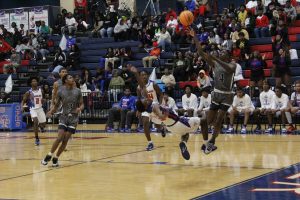 Clay-Chalkvill’e Davon Cheatham (#4) attempts a shot over Center Point’s Pernell Stewart as teammate Immanuel Douthard (#3) prepares for the rebound during the Cougars win over the Eagles, Friday, January 20. (Photo by Loyd McIntosh)

The Cougars were dominant in every aspect of the game; however, it was their defense that set the tone for the evening. Clay-Chalkville employed a high-pressure, full-court defense most of the night forcing the Eagles to commit multiple turnovers and poor shot selection all night.

The game got off to a bumpy start for both squads as neither team could find a rhythm offensively for the first nine minutes of the first quarter. Late in the first period, however, the Cougars’ defense went into turbo mode forcing several Eagles turnovers in quick succession, including on two consecutive inbound passes, for easy layups.

The Cougars held a three-point lead after a low-scoring first quarter, 12-9.

Smelling blood in the water, the Cougar defense simply smothered Center Point in the second quarter. Clay-Chalkville dominated on both ends of the floor while continuing to frustrate the Eagles closing down passing lanes, contesting every inbound pass, and hauling down rebound after rebound as their lead swelled to double digits.

Center Point only managed their first points of the second quarter with just under two minutes to play as the Cougars’ offense got its mojo working, scoring easy buckets in transition, overwhelming the Eagles’ defense in the paint, and finding their stroke from outside.

Clay-Chalkville sank two three-pointers in the final minute of the first half, including one from sophomore guard Devin McKinnon at the buzzer, capping a 14-4 run in the second quarter and taking a 26-13 lead into the locker room.

Center Point started the third quarter with a mini-run of their own, sinking a pair of three-pointers to the bench and the crowd on their feet, but the excitement on the Eagles’ side of the gym was short-lived.

Once again, the Cougars’ defense kicked into high gear, capturing steals and snagging rebounds leading to creative play in transition. By the four-minute mark in the third quarter, Clay-Chalkville’s lead had ballooned to 15 points, 36-21.

The remainder of the contest saw more of the same as Clay-Chalkville’s full-court press forced more front-court steals and stolen in-bound passes for easy layups as the Cougars pulled away for good in the fourth quarter.

“We have some athletic guys so we try to use that in full-court pressure,” said first-year Clay-Chalkville Head Coach Chris Richardson. “They did a good job making it hard to inbound and hard to get the ball up the floor.”

“I’m proud of them. They played with a lot of energy,’ added Richardson. “It was kind of slow at the beginning, but we only gave up four points in the second quarter which is pretty good. I was proud of them.”

Richardson said he was very pleased with the team’s performance in an important area matchup as they prepare to face the #1 ranked team in the state, Pinson Valley, and Mortimer Jordan next week.

“We have a huge week coming up. We still have a chance to come out number one in our area,” explained Richardson. “We have Pinson Valley on Tuesday and Mortimer Jordan on Friday, and both of them have to come to us.

This game set us up for next week,” Richardson added. “We did it the right way.”