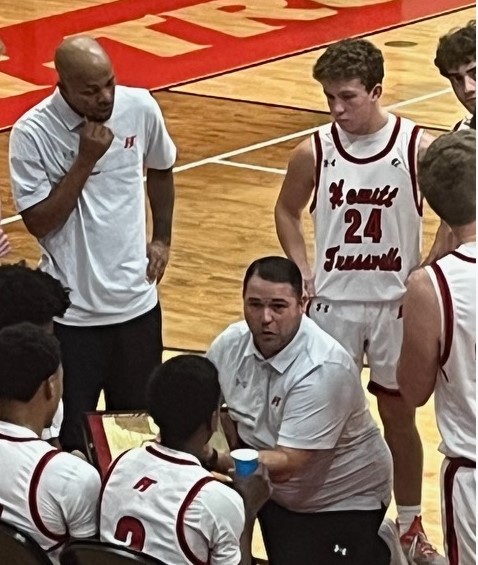 Husky boys get tough key win on the road against Chelsea, 61-59

CHELSEA – The Hewitt Trussville Huskies boys basketball team took the long trip up 280 to Chelsea High School to take on the Hornets on Friday night, looking to get a second straight win on the road.  Despite a slow start on the offensive side of the ball and digging themselves into a pretty deep hole, the Huskies showed grit and fought their way back to get a 2-point win over the Chelsea Hornets. 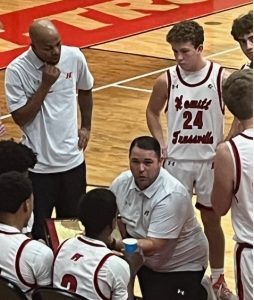 “It was a big win for our team and an incredible second half performance by the players,” said Head Coach Jeremy Monceaux of the Huskies’ performance.

Chelsea would find some success on the offensive side of the ball, putting up 14 points on the Huskies, while shutting down the Hewitt offense, only allowing 7.  Reid Stodghill had 5 and Ray Rolley added 2 of his own for the Huskies.

The 7-point deficit would get even bigger in the second quarter as the Huskies would manage just 10 points to Chelsea’s 17, making it 31-17 heading into the half, all Hornets.  Hewitt’s Legion Gaston would have half of the Huskies’ points for the quarter, scoring 5, along with 3 from Rolley and 2 from Jason Melton.  The visiting Huskies would head into the locker room down by 14 points and reeling.

“I thought we played the worst half of basketball of the season in the first half,” said Coach Monceaux.  “We were not defending at the level we normally do and we were just as discombobulated on the offensive side.  We challenged them at halftime and made a few adjustments.”

That challenge and those adjustments paid off for the Huskies too.  In the third, you could see the comeback on the horizon.  The Hewitt defense stepped up and held Chelsea to just 8 points.  On the offensive side, the Huskies exploded, scoring 23 points, more that they had the previous 2 quarters combined.  Gaston had 8 of those points along with 5 each from Stodghill and Karnell Smith.  The dominant quarter for the Huskies would send this game into the final stanza with the Huskies leading by one, 40-39.

Chelsea would get their mojo back on offense in the final period of the game, but Hewitt would not be denied on this night, outscoring the home team 21-20, sealing the 61-29 victory.  In the fourth, Gaston and Rolley would put up 5 points each to go with 4 from Emeka Anwah and 3 each from Smith and Stodghill.

In an impressive night, the Huskies would have 3 players in double digits, led by Legion Gaston with 18.  Reid Stodghill would add 14 to go with Ray Rolley’s 11 points on the night.

“The kids responded and fought to the end,” said Coach Monceaux.  “Everyone on the roster had a role in helping us find a way in that second half.  Still a lot of work to do, but very proud of our team.”

Hewitt improves to 17-8 on the season, 2-2 in their area.  They will look to keep the momentum going on Tuesday night as they welcome the Oak Mountain Eagles to Bryant Bank Arena.