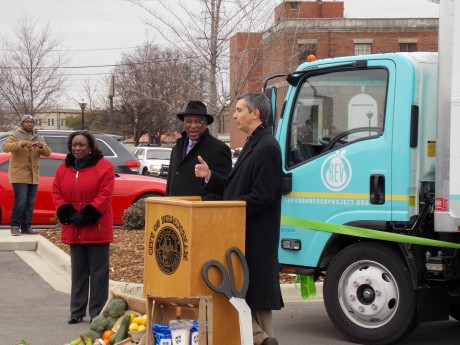 In a Woodlawn parking lot on a finger-numbing February afternoon, the newest addition to REV Birmingham’s Urban Food Project (UFP) was born: “Sam.” Coming in at approximately 21 feet and 10,000 pounds, the refrigerated delivery truck outweighs the late Sam Crawford, UFP co-founder and champion, but perhaps not his legacy.

“Sam” the truck will be used to follow through on goals championed by its namesake during his life: delivery of food to those in need in the community.

On hand to commemorate that legacy at SocialVenture — REV’s headquarters partially repackaged as a “modern, meeting space” in conjunction with the Woodlawn Foundation — were a couple of dozen celebrants, among them Mayor William A. Bell Sr.; REV CEO David Fleming; UAB Professor of Preventive Medicine Monica Baskin, Ph.D.; and Mrs. Sylvia Crawford, the honoree’s widow.

Fleming, who described Sam Crawford as “a phenomenal guy,” spoke first at the podium.

“It was Sam who got inspired to address this food desert challenge. Sam passed away, unfortunately, in 2013 from leukemia” – a train rumbled its approach on the adjacent tracks — “but his vision for feeding the hungry and poor and connecting small businesses and farmers” – the train’s horn moved closer and forced Fleming to shout — “in food deserts, revitalizing communities, is what we’re here to celebrate today.”

Fleming finally stopped competing with the train’s noise. “We deal with it every day!” Ms. Nettles, a Woodlawn resident, called out from the crowd of laughing supporters. “And he’ll blow 10 times before he stop. He never stop. He’s nice today. He didn’t do 15.”

When the ruckus subsided at one point, Fleming’s voice lowered instead of raising. “[Sam] really took it to his heart that thousands of people in low-income communities didn’t have access to healthy food.”

The mayor agreed. Following a brief introduction by Fleming, Bell said, “It was [Sam’s] vision to create an opportunity for everyone to have access to fresh foods, and today is a turning point in that commitment.”

For the mayor, it was personal as well as political: Crawford was a childhood friend. “He came from humble beginnings,” Bell said.

Crawford was born in 1949 in a low-income section of Birmingham called Titusville, moved away and then returned home near the end of his life, working as Main Street Birmingham’s director of business growth and continuing in that position through the merger of Main Street with Operation New Birmingham that created REV in 2012.

“He understood that oftentimes,” the mayor said, “because of your economic status in life, you don’t have access to all the things you need to have to have a healthy life.”

Baskin, a specialist on healthy living, next told tales of meeting Crawford much later in life. “I remember meeting Sam several years ago,” she says, “and having conversations about his interests around entrepreneurship and economic development here in Birmingham.”

From those conversations, she ended up recruiting him for the Jefferson County Place Matters Team. “He said he didn’t know anything about food,” she recalled. “But people were telling him that food is the way to go!”

In a moment of quiet, celebrants huddle around “Sam.” Photo by Nick Patterson.

But Crawford wasn’t new to healthy food in his own life, at least not according to his daughter, Mandisha Crawford. Speaking by phone from Florida, she remembered, “As a kid when I would want my junk food, and, you know, things that probably weren’t good for me, I went through his cabinets and there would be things that I didn’t want to eat.” She recalled with a laugh, “There would be all these different health-conscious foods, apples and almond butter, when I just wanted a peanut butter sandwich!”

After Crawford’s death, a newspaper piece, she felt, offered too much veneration to her father. “It just had a lot of things you say about a person just because they’ve passed on that aren’t necessarily true,” she said. “I was thinking, ‘This is kind of a lot of smoke and mirrors’ when there was plenty to say that was good without having to fudge the truth any.”

Mandisha Crawford, a realtor and “jack-of-all-trades,” evaluated her father as being worthy of praise. “No one is perfect, but he was a good guy,” she said.

She speaks highly of her father’s work with the Urban Food Project. “I think it’s really cool that they’re naming the food truck after him. And from what I saw, he did do a lot to bring access to the farmer’s markets, access to healthier foods for people of lower or moderate incomes,” she said, her voice trailing off. Then, after a moment of silence, she said, “Always — from the time I knew him — he was always sort of like that.”

And just like that, his new namesake “Sam” — leased through a $100,000 grant through the USDA Local Food Promotion Program, after nearly two years borrowing Magic City Harvest’s truck for deliveries to restaurants and corner stores — continues his legacy. One brought food to the hungry with his presence; one will keep doing so in his absence.

So, said Mrs. Crawford, her Sam “would be ecstatic about this! The whole thing!

“This was something that he wanted to do,” she said, “and one of the last things he talked to me about before he passed was that he would hate having to leave his job. He loved the job. He loved everything he was doing here. And I know he would have been really proud of this,” she says.

“Proud” seemed the buzzword of the day as Friday afternoon slid into evening. Bell concluded his speech, saying, “This is just one stop along the way, one that we’re proud of but one we won’t rest on.”