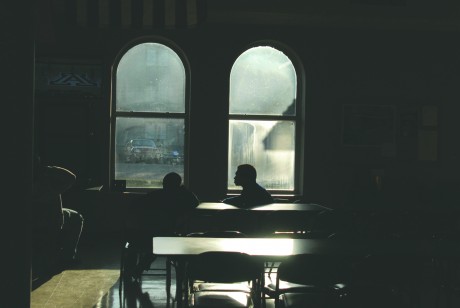 Editor’s note: Photojournalist Julianna Hunter went to Selma for Weld to cover the hundreds of people, including President Barack Obama, who visited the Black Belt town March 7-9 to commemorate the history-making events of 50 years ago. Hunter’s images and captions capture some of the experiences of the ordinary people who made the trip to walk in the footsteps of Civil Rights pioneers.

The events of this past weekend were multifaceted. Thousands came on Saturday to hear the president speak, and many took part in events, including street fairs and music festivals and patronized merchants who were on the scene. Despite the serious nature of the historical background, visitors, many of them children, demonstrated joy and appreciation for being involved with the event. Visitors included performers, politicians, activists, survivors of the original Selma to Montgomery marches, and the relatives of those who were there in 1965.

Two young men rest inside the Cornerstone Presbyterian Church. The congregation opened their doors Saturday and offered water, coffee, lemonade and sandwiches along with a place to sit down and bathrooms.

Veronica Williams plays with her sons, Ernest Jr., 15 and Ajahnni, 9, at the Cornerstone Presbyterian Church. “Ajahnni” means “he who wins the struggle.”

Bernice King, daughter of Dr. Martin Luther King, waits to be let through security during the 50th Anniversary of Bloody Sunday in Selma, Ala., Saturday, March 7, 2015.

People wait underneath the Live Oaks to go through the Secret Service search to be allowed in to hear President Obama speak. At times the line was six blocks long and lasted several hours.

Crowds wait outside the Brown AME Church in the GW Community Housing Projects in Selma.

Thousands of people cross back and forth over the Edmund Pettus Bridge – a less daunting task than it was on Bloody Sunday in 1965.

Nathan Knight, president of the South DeKalb Chapter of the SCLC, holds signs to gather his marchers.

Dr. Park Chitom, right, blows the shofar with other members of the Selma community to greet the marchers as they come over the Edmund Pettus Bridge.

Commemorating what happened in Selma brought throngs of people to the Edmund Pettus Bridge from around Alabama and across the nation.

On the eve of the big march, Selma Mayor George Evans, gives an interview to Al Jazeera America.

Senator Hank Sanders hugs Kahadijah Ishaq (cq) of Selma during the beginning of the Selma to Montgomery on Hwy 80 in Selma, Ala., March, Monday, March 9, 2015.

Barbara Wien of American University works on a sign before the march. She is part of a group that will march from Selma to Ferguson, MO for a “rally and truth-telling weekend” where Michael Brown’s death in a police shooting sparked weeks of protests and racial tensions.

John Rankin of Selma prepares to walk a portion of the Selma to Montgomery March. Rankin was one of the original foot soldiers and has done the walk six times now. As the 50th anniversary march begins, Rankin is not sure he will walk more than on Monday because he had pneumonia a few years back and damp, rainy weather is more trouble than it used to be.

Clare Hanrahan places a beaded necklace around Jim Brown’s neck as the march begins. Brown is with Veterans for Peace. He and Hanrahan, both from Ashville, NC, are walking with the Buddhist Peace Walkers, a group which has marched from Selma to Montgomery 15 years in a row to support the Southern Christian Leadership Conference.

Desiree Robertson, 11, of Selma, Ala. leads the marchers over the Edmund Pettus Bridge.

Janet Howard of Chicago, originally from Marion, Ala. , was 12 years old when she first crossed the bridge in 1965 with two of her siblings during Bloody Sunday. This is the first march she’s participated in since then. Her mother also marched in 1965. She appreciates that her parents saw the bigger picture and she could reap the benefits; that they thought not of just themselves, but of people as a whole.

The marchers make their way down the highway.

The marchers make their way down the highway.

Left to right, Corinne Bryant, Syracuse, NY; her son, Jerome Bryant, Syracuse, NY and her brother Tommie Bryant of Baldwinsville, NY get ready to be part of the recreated Selma to Montgomery march. Tommie Bryant was one of the original marchers who crossed the bridge during Bloody Sunday. On Monday, Bryant felt like something was missing; that there should be people lined up all the way to Marion, Ala. to march to Montgomery. There were less than 100 marchers starting the five day march to Montgomery. “There’s still a tremendous amount left to be done,” Bryant said.

Fifty years after Bloody Sunday, Civil Rights marchers start on the trek to the state capital in Montgomery under very different circumstances. Many say there is much to be done to achieve equity in American society, that hard-won Civil Rights victories have been endangered by recent court rulings, and that improving race relations remains a work in progress. But the marchers this week went on their way from the Edmund Pettus Bridge without fear that state or local officials would resort to violence to halt their progress.

For a more complete look at Hunter’s trip to Selma, follow this link: https://youtu.be/I8o8RtbyAZA