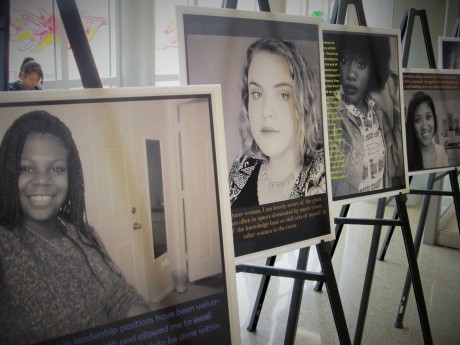 A thought-provoking exhibit gives viewers a glimpse of young women seen through their own lenses. Photo by Bethany Adams.

When it comes to the war against discrimination, there’s one thing you may not expect to find in a woman’s arsenal: the selfie. But a project at the University of Alabama-Birmingham is turning the Internet phenomenon into a weapon against sexism.

The UAB Selfie Project is a collection of images submitted through e-mail and social media which are currently on display in UAB’s Heritage Hall. The faces of various women stare out from the nearly 20 posters that stand throughout the first floor. Some smiling, some somber, all are accompanied by brightly-colored captions that aren’t your regular hashtags.

“Being a woman in college,” one reads, “you’re reminded by subtle things that you’re still a step behind.” Another speaks out against violence toward women, stating, “I should never have to feel unsafe just because I am a woman.”

Among the posters is an image of Roni “RJ” Alcantara, a UAB junior who is both a first-generation college student and a first-generation American. Addressing a different kind of issue that women on campus are facing, her poster reads, “…I have felt a constant struggle between adapting to American society and holding on to my cultural background.”

“It’s become apparent that women need a space on campus to speak to each other about issues,” says Johnson, whose selfie, along with Sullivan’s, is also on display. “Our experience,” she explains, “no matter what it is, is touched by being a woman.”

One of the specific issues that Johnson and the others hoped to address with the project was the marginalization of women within the fields of math and science. “I empathize very heavily with our STEM [Science, Technology, Engineering and Mathematics] students,” says Sullivan. She relates her experiences as a math tutor in college, when people would walk past her, assuming that the male student she was tutoring was actually tutoring her. “It’s a lot of emotional labor that women have to do just to be at work or be at school, and that’s unacceptable.”

It was Sullivan who first suggested the idea of selfies. “Women are using their own lens to capture who they are,” she explains.  “It’s them being in control of their own image, which doesn’t typically happen for women.”

While she and the others discussed using statistics in the display, Sullivan felt that the personal touch of photographs would have a stronger effect. It’s a feature of the project that hasn’t gone unnoticed by students. “I think [the project] makes women’s experiences more personal,” says Jacob McQueen, a biology major at UAB, “especially with a close up picture of the woman herself.”

When it came to captioning the photos, Johnson felt that it was important to let the participants share their stories with no parameters. As a result, the submissions address a wide range of topics, among which are race, sexual orientation and discrimination in the workplace.

Although Alcantara describes being a woman as “very empowering,” she also believes that the fight is not over. “Even though we have come so far… we still have to fight just as hard and have even more credentials to get the same positions as men,” she says. “We don’t want people to forget those hardships.”

If the project has done nothing else, it has started conversations. “There are words that people use that are scary to some people,” Sullivan explains, having observed that many students who come into contact with the project are uncomfortable with what they see. “That’s a good thing,” she says, and she emphasizes the need to “push people to talk about those issues.”’

Emmaleigh Bailey, a public relations major at UAB, says that the project “definitely catches your attention, in more than one way.” Overall, she thinks that it was a good opportunity for women to let their voices be heard. “Most of the time, we feel like we can’t say what’s really on our minds, or talk about what we’re going through. This Selfie Project gave those girls a chance to.”

But the project isn’t trying to point fingers at men as the source of women’s issues, notes Courtney Clem, who is studying industrial distribution. “Something unique I noticed each girl did was talk about their overall experience, not just how men have treated them differently,” Clem says. “The Selfie Project really brings to light that people face opposition from other people in general, not just men.”

While the exhibition is a temporary installation, Johnson, Sullivan and Alcantara have received enough positive response that they hope to repeat the project in the future. “People want to talk about their experiences,” says Johnson. “Good or bad, people need a space to share.”