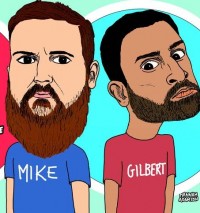 With only two years of stand-up experience, Christopher Ivey is new to the comedy scene in Birmingham, but he is ambitious. He is hoping that ambition will give more opportunities to local comedians, touring national acts and Birmingham as a whole with his project Goulash Comedy.

“We are one of the biggest cities in the South, and there is no reason that a big, fun comedy act should hit Memphis, New Orleans and Atlanta but not Birmingham,” Ivey said. “It makes no sense when there is a big appetite for it.”

Ivey started Goulash Comedy a few months ago and has hosted several open-mic nights at Syndicate Lounge.  This week he will begin incorporating feature performances with national acts alongside local comedians.

Ivey will continue pushing for laughs in July with Sasheer Zamata, who has been seen on Saturday Night Live.

Ivey realized how much talent was in the comedy scene as soon as he began performing. With work experience in sales and business, he began envisioning how it could be better.

“I was really surprised by how many people were really good,” Ivey said. “They were too good to not be getting paid.”

Ivey explained that he wants to help organize the established comedy scene and bring the different groups and comedians together, which will help bring people out to watch or even get up and try stand up for the first time.

“People in the city have been doing comedy a lot longer than me, and I am not trying to step on any toes,” Ivey said. “I’m just trying to think about it bigger and grander.”

Ivey’s main goals are to bring eclectic comedy shows to the people of Birmingham, showcase national and local talent and provide local artists an outlet to work on their material.

“There’s a lot of us who are doing it and trying to make it, and I just hope that Goulash will give people an opportunity,” Ivey explained. “I hope people don’t feel like that have to leave Birmingham to do something.”

Mama Won’t Fly — South City Theater. 2969 Pelham Parkway, Pelham. South City Theatre presents the final weekend of Mama Won’t Fly. The misadventures of Savannah Sprunt Fairchild Honeycutt and her feisty mother unfold in this topsy-turvy comedy written by Jessie Jones, Nicholas Hope and Jamie Wooten. A destination wedding takes the duo on a road trip from Alabama to California in a race against the clock with plenty of mishaps and mayhem along the way. Thursday–Saturday at 8 p.m. $16. For more information, visit southcitytheatre.com.

Tribes — Birmingham Festival Theater. 1901 11th Ave. S. Nina Raine’s award-winning Tribes is a play about families — the tribes we are born into and the tribes we fit in with. For Billy, a young man born with deafness into a hearing family that never bothered to teach him sign language, the possibility of a new tribe is a foreign idea. Until he meets Sylvia, a young woman born to deaf parents who is in the process of losing her hearing as well. Thursday–Saturday 8 p.m., and Sunday June 7, 2 p.m. Through June 13. $20. For more information, visit bftonline.org.

Menopause the Musical — BJCC. 2100 Richard Arrington Jr. Blvd. N. “Inspired by a hot flash and a bottle of wine,” this award-winning musical embraces the changes in life through the eyes of four over-40 women who bond while shopping for lingerie. Bursting with heart and humor, Menopause the Musical has evolved into an anthem of female liberation. With plenty of audience participation and frank storytelling, the Change is no longer a “silent passage.” Friday, June 12 at 8 p.m., and Saturday, June 13 at 2 and 8 p.m. For more information, visit bjcc.org.

The Music Man — Virginia Samford Theatre. 1116 26th St. S. This classic Broadway musical comes to life onstage at the Virginia Samford Theatre. From “76 Trombones” to “Gary, Indiana,” The Music Man has won its place in the American musical theater canon (and five Tony Awards) since its debut in 1957. The slick but lovable conman, Harold Hill, and his romantic foibles with a prim librarian spell out “Trouble (with a capital ‘T’)” for the sleepy town of River City. Thursday through Saturday, 7:30 p.m. Saturday and Sunday, 2:30 p.m. Wednesday, July 1 at 7:30 p.m. Through July 5. Tickets start at $30. For more information, visit virginiasamfordtheatre.org.

Falling: A Wake —Birmingham Festival Theater. 1901 11th Ave. S. Birmingham Festival Theatre presents this Broke Folks Theatre production of Gary Kirkham’s drama, Falling: A Wake. When the body of a young man strapped in his airplane seat lands on Elsie and Harold’s farm in the middle of the night, the couple must examine life, love and the dark humor of it all. Thursdays through Saturdays at 8 p.m., Sunday June 21 at 2 p.m. $20. For more information, call (205) 933-2383.

Mr. Marmalade — Theatre Downtown. 2410 Fifth Ave S. Lucy is a five-year old with an imaginary friend. Pretty typical for a kindergartener, except that Mr. Maramalade is no ordinary friend. Marmalade enjoys cocaine and pornography far more than tea parties and Hide and Seek. When Lucy meets a new friend Marmalade gets angry and dangerous. The dark comedy presented by Theatre Downtown is an Alabama premier. Thursday–Saturday, through June 27 at 8 p.m. $17. For more information, visit theatredowntown.org.

Becoming Dr. Ruth: An Unexpected Journey — Terrific New Theatre. 2821 Second Ave. S. Karola Siegel was a child when she fled the Nazis in the Kindertransport. She was a scout and sniper for the Haganah in Jerusalem and then struggled as a single mother in America before taking on perhaps the most unlikely career: a television network sex therapist. The Terrific New Theatre brings Mark St. Germain’s play to life in this honest and humorous production about the real life of Dr. Ruth K. Westheimer. Thursday–Saturday at 8 p.m., and Sundays 2:30 p.m. through June 20. $25. For more information, visit terrificnewtheatre.com.