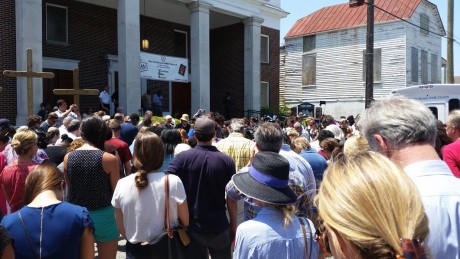 I wonder if Rachel Dolezal would have wanted to be the thirteenth person in the Bible study at Emanuel AME Church last Wednesday night.

A year from now, we will have forgotten this white woman’s name and her curious quest to be considered black, but surely we will remember that nine Charleston citizens were murdered in their house of worship only because of their skin color.

Sociological theories and psychological treatises notwithstanding, there is no other reason these nine people are not alive today. We know this because the alleged shooter said so. “Y’all are raping our women and taking over the country,” the shooter was quoted as telling Sanders just before he killed him. “This must be done.” We know he said such things because the shooter deliberately chose not to kill everyone he encountered. “Someone has to live to tell the story, because I’m going to kill myself, too,” a survivor heard him say.

Some aspects of that story beggar imagination. If you have ever attended a small-group Bible study on a Wednesday night, you have probably never met a stranger there. Wednesday nights are for the faithful few, the doubly devout. It is difficult to speculate what the dozen folks assembled at Emanuel, African-Americans all, must have thought when the thin white visitor came through their door. It is hard to envision an hour’s discussion of New Testament Scripture punctuated by gunfire inside the church itself; impossible to visualize the river of blood that cascaded across its floors.

Did you know that at one time the parishioners at Emanuel AME could not open up any doors for worship, lest they be jailed? The church was founded as an answer to discrimination in 1816, and by 1822, its congregation was 4,000 strong. In that year, a church leader named Denmark Vesey started working up plans for a Carolina slave revolt. Ratted out by a fellow church member, Vesey and more than 30 anti-slavery activists were arrested, tried and executed by the Charleston city government. The state government passed laws forbidding all-black worship and the AME church building was burned down by vengeful whites to tamp down any further spiritual rebellion there.

Meeting in secret for decades, the church reopened in Charleston after the Civil War under the name Emanuel AME, becoming a local staging point for what would come to be called the Civil Rights Struggle. Its reputation for activism continued into the 21st century; its most recent pastor, the late Clementa Pinckney, was also a South Carolina state senator.

As often happens when events leave us at a loss for words, our better writers provide them. Last week, Charles Pierce of Esquire wrote:

The black folk gathered in that church were the proof that [the alleged shooter] was wrong; they were the living, breathing antithesis of bigoted creeds cooked up in the racist fog he lived in. It was not their barbarity, but the moral beauty of black people that let an angel of death hide in their religious womb.

Then there was a remarkable response on The Daily Show by Jon Stewart, who frankly admitted he had no comedy for his viewers:

I honestly have nothing, other than sadness that once again we have to stare into the abyss of depraved violence that we do to each other, and the nexus of a gaping racial wound that will not heal, yet we pretend does not exist. I’m confident, though, that by acknowledging it, by staring into that and seeing it for what it is, that we still won’t do jack —-. Yeah, that’s us.

There was indeed a fetid whiff of déjà vu suffusing some public responses. Jeb Bush was one of many prominent Republicans apparently incapable of determining if these murders had been racially motivated; former Texas Governor Rick Perry even stated that the whole thing was an accident (later clarifying that he meant to say it was an incident).

President Obama, for his part, sounded wistful when he said, “At some point, we as a country will have to reckon with the fact that this type of mass violence does not happen in other advanced countries…I say that recognizing the politics in this town foreclose a lot of those avenues right now. But it would be wrong for us not to acknowledge it.”

Yeah, that’s us, all right.

Some other things are easy to predict: we will learn more about the alleged shooter’s back story in days to come, even as we hear more useless nattering about whether this was a hate crime or a terrorist attack. We can count on some sort of insanity defense, even though it will be revealed that the shooter’s actions made perfect sense to him within the parameters of racial hatred in which he was inculcated.

The history of the South proclaims that resentment is a stubborn ember, difficult to quench with reason and impossible to contain when it catches fire in dry, fallow intellects. Last week in Charleston, we saw again the ashes that ensue when a bitter man with nothing better to do with his life decides to take away somebody else’s.