LATEST NEWS
Home Weld for Birmingham Are the Pollies the next big thing from Muscle Shoals? 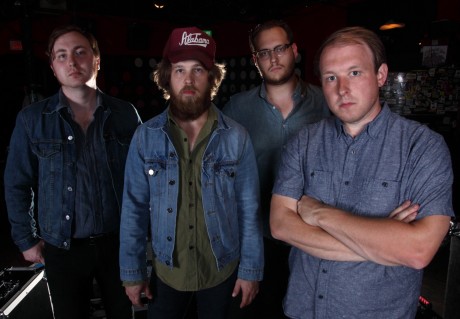 Are the Pollies the next big thing from Muscle Shoals?

Jay Burgess wears the same Alabama hat everywhere he goes. It’s red and it naturally cocks to the side; it always has.

“I was producing [St. Paul and the Broken Bones’s guitarist Browan Lollar]’s solo EP and he showed up to the studio wearing this Alabama hat,” said the frontman of Muscle Shoals’s The Pollies. “I was like, ‘Where’d you get that hat at?’ and he’s like, ‘Man, I found it at a truck stop down in Florida. It looked like it had been sitting there for 25 years. It had dust all over it.’ Nobody was going to buy this hat in Florida. So he bought it and he’d had it for a year or so and he said that was the first time he’d ever worn it since he bought it. And he said, ‘Man, it fits funky. I don’t really like it. You want it?’ So he gave it to me and the first time I put it on, it sat wonky. When you put it on your head, it sits to the side. A lot of people think I twist it to the side; that’s just the way it fits.”

The signature look stuck after publicity photos began to appear, and as The Pollies ready their first record for John Paul White, Ben Tanner and Will Trapp’s Single Lock Records, the hat, too, becomes the face of the album poised to introduce the band to a new audience. In time for the September 25th release of Not Here, Nashville’s Thirty Tigers has backed the band and will split distribution of the new album with the Florence label — the same Thirty Tigers that backed young artists like The Avett Brothers, Sturgill Simpson, Lollar’s St. Paul and the Broken Bones and Jason Isbell.

“You can look at their artist list and tell how important [the relationship with the label] is,” Burgess said. “But it’s not about that. They’re a great label. They’re doing great things. And they love our record. Out of all of the music business [expletive], if you can find people that are good at what they do that like your stuff, then those are probably the people that you want to work with. You don’t need the million dollar contract with the label that’s going to leave one person to have our back. You want a deal where everyone at the damn label’s got your back.”

Burgess and Isbell share more than Thirty Tigers. For most of their lives, they shared a zip code. “Muscle Shoals” is much cooler to say aloud, but like Lydia and Laura Rogers (The Secret Sisters) and Chris Tompkins (co-writer of Carrie Underwood’s “Before He Cheats”), Burgess is from Greenhill, an unincorporated community about 20 miles from FAME. And he cut his teeth with naiveté, surrounded by some of the best musicians in the world.

“If you went to [now defunct Florence Mexican restaurant] La Fonda’s and David Hood’s [the Swampers] playing bass, Kelvin Holly’s [Muscle Shoals Rhythm Section] playing guitar, Barry Billings [The Shooters] is playing the other guitar and Chad Gamble [Jason Isbell & the 400 Unit] is playing drums and you’re sitting up there on a guitar…for me, being an 18-year-old, I didn’t know what David Hood did. I just knew he was a nice, cool guy who is really [expletive] good. Same thing with Kelvin. Same thing with Barry. Barry was just a guitar teacher; that’s what I knew him as. I didn’t know he played in this band that had a hit. Chad was just a drummer. He was a really good drummer – but you grew up with these guys and it made everyone better. Dick Cooper [Alabama Music Hall of Fame curator, former Drive-By Truckers road manager] said it best to me a long, long time ago. He said, ‘I’ve traveled all over the world and I’ve watched a lot of great musicians but any city’s best musicians are third string to our worst musicians in Muscle Shoals.’ And I thought that was pretty [expletive] cocky, but it has a certain truth to it.”

He’s crossed 30 now, and like Isbell, his dues have been paid. After several years as part of other projects, including Sons of Roswell, The Pollies released “Where the Lies Begin” on This is American Music in 2012. It included a tune that Brittany Howard of Alabama Shakes publicly praised called “Ashes of Burned Out Starts” and a tune that appeared in the spring NASCAR broadcast at Talledega called “Little Birdie.”

“I wrote a lot more for this record because I had a lot more time to write,” said Burgess. “I had songs saved on my phone from the first record. There were some that I’d go back and listen to – we’d be riding in a van and I’d show the guys and maybe push the wrong song and they’re like, ‘What’s that?’ I slowly learned on this last record that if it’s something I don’t like with an acoustic theme, putting the band in it can totally change the song. ‘My Darling’ was one of those songs. I think I wrote that song ten different times.”

Often, the words he never meant to write are the words that work.

“Usually when I write, I come up with a progression and a melody and I’ll make up words off the top of my head and record it,” said Burgess. “But when I go back and listen to it – I guess it depends on what mood I’m in – I’ll hear a lyric and I may not have said it, but it sounded like I said it and it makes total sense.”

Single Lock Records and Sun Drop Sound feel much more like household names today, but when The Pollies were set to record, the studios weren’t complete. North Carolina was considered and so was Chase Park in Athens, Georgia. Rick Hall’s FAME was the local option discussed, but Burgess elected to get out of town.

“There’s a lot of distractions that come with recording in your hometown,” Burgess said. “It’s real easy to run an errand when you’re at the studio. We tracked all the parts at once, so we wanted everyone to be free of distraction and going out of town was the best way for that to happen.”

So that’s what he and Tanner did. Before Tanner was touring the world as keyboardist for Alabama Shakes and before his label, Single Lock, had introduced St. Paul & the Broken Bones, he was holed up inside Dial Back Sound in Water Valley making Not Here with Burgess. Before Single Lock had tasted real success; before that marriage evolved into the new agreement with Thirty Tigers,

“When you get involved with a new label, it doesn’t matter who’s doing it,” said Burgess. “It doesn’t matter if it’s Bob Dylan’s new label. It’s a new label. You don’t know what their capabilities are because they haven’t been able to show it yet. You have certain people that you know and when they come to you with a plan, you know that it’ll get done. And John [Paul White] and Ben [Tanner] are those two dudes that I’ve known for the last ten years.”

Tanner and Lollar once backed Burgess at the same time before finding their current projects. Not Here is poised to make Burgess’s current lineup of Spencer Duncan, Reed Watson and Danny Hurley the next “Alabama thing,” the next “Muscle Shoals thing.” It’s the fifth release in the Single Lock catalog. Paste has included the band in the same sentence as Wilco. And sincere songwriting will conjure many of his “Muscle Shoals” peers.

The hat is coming with him. He’s even checked on how easily a replacement can be acquired should it not survive the years of wear and sweat. [It can.] “If I didn’t wear it, people would be like, ‘Where’s it at?’” he said. “I wear it all the time at home. It’s almost glued to my head if I’m on the road. I’m fixing to have to get a new one.”

The Pollies come to Saturn on Thursday, August 13. They’ll bring labelmates and Muscle Shoals peers Daniel Elias + Exotic Dangers along for the ride. Doors open at 7 p.m., while the show begins at 8 p.m. Tickets at $8 in advance and $10 at the door. For more information, visit saturnbirmingham.com.