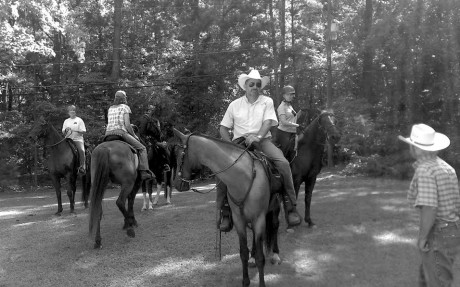 Over the last four years, Alabama’s Department of Conservation and Natural Resources (DCNR) has been subjected to $27,186,072 million in funding transfers to the Alabama General Fund budget.

As Greg Lein, director of Alabama State Parks, explained on Thursday morning, if these funding diversions continue, it could lead to the closure of up to 15 parks in Alabama.

The proposed 2016 general fund budget calls for $9,250,000 to be diverted from the DCNR. “This would be devastating,” Lein said after a press conference at Oak Mountain State Park. Oak Mountain is one of the parks that could be on the chopping block if the proposed budget is passed. “We won’t be able to endure any more cash transfers.”

Alabama is currently facing a budget shortfall of $260 million dollars. As lawmakers try to plug the holes, a proposed budget was passed by the Alabama State Senate, but vetoed by Governor Robert Bentley. That budget would have resulted in the closure of 22 of Alabama State Parks, according to Lein.

“This year, during the regular session, we saw a pattern emerge that suggested that those diversions and transfers were going to be extended a fifth year. Obviously that is a concern to us. The transfers over the last four years has resulted in our emergency funds and reserve funds to be depleted,” Lein said.

The money that has been transferred over the last year comes directly from the licenses and park fees that users pay when they enter the facilities.

Oak Mountain State Park is not funded by taxpayer dollars, but by revenue generated through visitor entry fees. In 2012, the park brought in roughly $3,060,000, with 28 percent of that brought in by gate admissions, according to Lein.

Once an avid cyclist, Pelham Mayor Gary Waters said that over the years he has left a pound of flesh on the trails in Oak Mountain. “This isn’t just a park to us here in Pelham, this is our backyard,” Waters said. Having lived in the area for over 40 years, Waters said the importance of the park reaches far beyond those who live in the immediate area. “This is a jewel for all of Alabama,” Waters said.

‘The relationship that the city of Pelham has had with Oak Mountain State Park goes back before the state legislature annexed this park into the corporate boundaries of Pelham in the early 90s…This was so that we could properly and legally provide first responder services,” Waters said.

“Between what the city of Pelham attempts to do and what Shelby County has done for this park, we have done our part. What’s missing is the part that the state of Alabama should be playing in properly funding this park. That’s where the deficit is in my opinion,” Waters continued.

While Lein did not say specifically what would determine whether Oak Mountain closes, he did offer an analogy explaining the significance of the fifth year of budget diversions.

“Imagine you are a home owner and you have budgeted out your routine bills and things like that. Then someone comes along and takes half of your funds. What do you think will happen?” Lein asked. “You’re going to be worried about being able to pay the bills, and that’s where we are right now.”

Both Lein and Shelby County Manager Alex Dudchock did say, however, that the potential closure of the park is directly related to how much money the state will divert from the parks funding once the budget is passed.

“They’ll have to reassess the list of potential closures if the budget passes like they have been trying to push through,” Dudchock said on Thursday.

In 2014 Oak Mountain saw 386,686 guests come through the gates. This year, according to Dudchock, the park is on track to serve over 400,000 guests. Right now, state and local officials are just trying to get back to level funding.

“From what I understand the governor has asked for level funding for DNCR, which will allow them to continue partnering with Shelby County. As of right now, Shelby County has invested and pledged $3.1 million for local, in-park improvements. That is for existing infrastructure improvements, not for the proposed lodge project,” Dudchock continued.

Bentley, who originally hails from Columbiana, just outside the boundaries of Oak Mountain State Park, has been “going to bat” for the DNCR, according to Dudchock. As evidence, the county manager offered the fact that Bentley vetoed the budget proffered by the senate. “We just need the state legislature to step up and be a true partner with us,” Dudchock said.

As the state legislature works on a solution to the massive budget shortfall, the fate of Alabama’s State Parks hangs in the balance.

With no money left in the reserves, future natural disasters such as the BP oil spill and the April 27 tornadoes, which left damage across several state parks, could be disastrous. Add to that the proposed $9,250,000 appropriation from the DNCR to the state’s general fund, and it appears that the DNCR is up against a wall, Lein said.

“That proposed budget that was vetoed by the governor, would have called for four quarterly payments of $2.3 million. Our payroll every month for the parks department is $1 million,” Lein said. “It doesn’t leave much left. These aren’t budget cuts, this is the state moving cash away from us. When you do that, it creates a situation where you could overdraw our funds. They have this global approach to fixing the budget. Lawmakers aren’t looking at the ramifications of budget cuts in various agencies.”

Lein said he hopes people who are concerned about the possibility of the parks closing will contact their state representatives and voice their opinions.